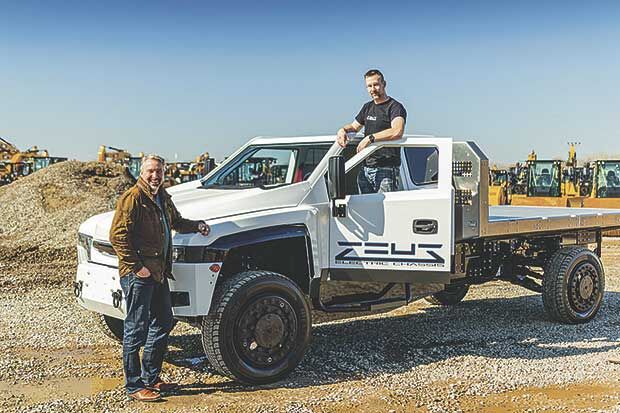 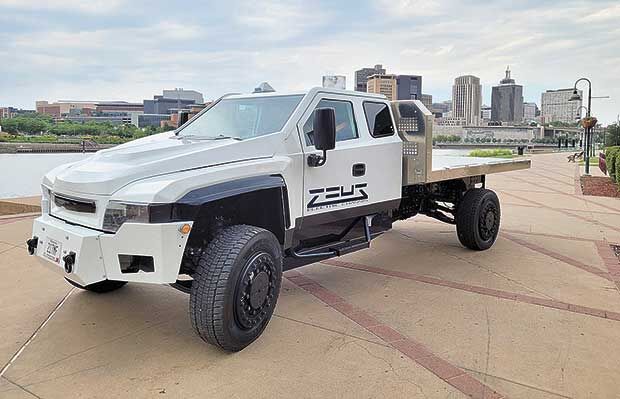 A prototype of the Zeus electric chassis at Harriet Island during an appearance as part of the COP26, which will take place in Glasgow in Fall 2021.

A prototype of the Zeus electric chassis at Harriet Island during an appearance as part of the COP26, which will take place in Glasgow in Fall 2021.

The future of sustainable energy is changing fast, and Zeus Electric Chassis in White Bear Lake is one of the innovative businesses riding in on the storm front.

The business started in Lindstrom, but opened a new workshop in White Bear Lake in April 2021. Engineer and founder Bob Grinstead had already been working on the plans for an electric work vehicle nearly seven years when he was introduced to Wayne Kugel, who invested in the business and now serves as CEO.

Zeus electric vehicles are mid-size work vehicles—larger than a pickup truck, but smaller than a semi. The frame can be customized and adapted to many purposes, including delivery trucks, cherry pickers, dump trucks, buses and more. “It doesn’t matter if you’re a dump truck, or a service truck, or a pumper truck, we can use the same suspension packages and frames as modules. So it’s kind of Lego-like,” Kugel said.

Since electric vehicles need to be recharged, there are a lot of questions about how the trucks will work in the field. Kugel said it’s all about designing each truck for its specific purpose from the ground up.

“We are selling to vocations,” he said. “So people that are plowing roads, putting up cables, digging ditches. How far are they going, how often are they stopping, how cold do they need to keep their cabin in the summertime, how warm do they need it in wintertime? We have an application, then we right-size the energy storage to meet what you need on a daily basis. So we’re trying to change the way you ask about energy.”

Grinstead called it “the other green meat” – helping businesses decide which options make the most sense for both sustainability and economics.

“It’s not hard to electrify work trucks,” he said. What will be more difficult are meeting the barriers to making the switch from fossil fuels to electric energy.  “It has to be sustainable. We have a model that does that. It’s just a matter of time,” Grinstead said.

The Zeus team didn’t know until they moved in that White Bear Lake is a Greenstep City. Greenstep Cities are focused on meeting sustainability and quality-of-life goals to improve the community, which makes it a fitting location for Zeus.

“We really like the White Bear area,” Kugel said. “The customers can fly in, we can go for a nice meal; it’s just a great community.”

Zeus works with many partners both local and across the nation to build its electric vehicles. The motors used in the work trucks come from New Ulm, hydraulics and electronics are handled by the Nott Company in Arden Hills, and assembly will take place at Choctaw Manufacturing Defense in McAlester, Oklahoma.

“We’re the only business model out there that uses this interlocking technology,” Kugel said. “Our expertise is assembling and building the solution. We have patents on our look, on how the truck is constructed, but all the rest, we depend on our partners. We don’t have to design a garbage truck. We don’t have to design a bus. They know better than we do. We just have to focus on our solution. That’s why I think at the end of the day, we’re going to be the best out there.”

Zeus is currently still in its testing and validation stage, but is scheduled to send its first five trucks to the Sacramento Municipal Utility District near the end of 2021. The implementation of these utility vehicles will be documented and reported in a six-month case study for other truck fleets interested in making the transition to electric power.

“We want Zeus trucks in every single Minnesota fleet,” Kugel said. “Oftentimes we say that Minnesota is flyover country, but for trucks, the Midwest is the hub of all things trucks. “

Learn more about Zeus Electric Chassis by visiting the website at https://zeuselectricchassis.com.