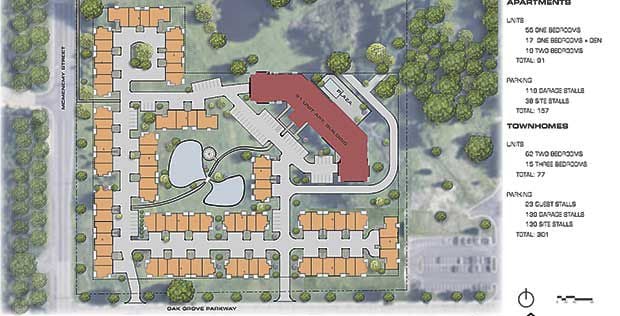 This concept plan shows how the development will be configured with the 91-unit apartment building towards the back of the property. Access is no longer from McMenemy Street, but Oak Grove Parkway.

This architectural rendition provides an idea of what the luxury townhomes will look like. Exteriors are “modern farmhouse” with white features, wood siding, and cedar shakes with stone accents. They are slab on grade. Amenities include gourmet kitchens, large windows and heated garages.

This concept plan shows how the development will be configured with the 91-unit apartment building towards the back of the property. Access is no longer from McMenemy Street, but Oak Grove Parkway.

This architectural rendition provides an idea of what the luxury townhomes will look like. Exteriors are “modern farmhouse” with white features, wood siding, and cedar shakes with stone accents. They are slab on grade. Amenities include gourmet kitchens, large windows and heated garages.

VADNAIS HEIGHTS — Judging by the number of residents who spoke in opposition to a proposed multifamily housing project on the corner of County Highway 96 and McMenemy Street, support appears to be lacking.

City Council heard one neighbor after another request denial of a concept plan proposed by At Home Apartments LLC, the same company that owns and manages Boatworks Commons in White Bear Lake. The company wants to build 77 two-story townhomes and a 91-unit, four-story apartment building on a 13.9-acre parcel currently owned by IC System.

The development requires a Comprehensive Plan amendment to change land use from office/business to mixed. The change would be consistent with the city's 2040 land use plan and supports housing goals, noted Community Development Director Nolan Wall.

In his presentation to council, Wall said the project would bring new housing units to the community and put underutilized property on the tax rolls.

Wall reminded council the city does not have the authority to regulate whether a property should be a specific use: for example, senior housing versus market-rate apartment, or the type of occupancy, rental versus owner, if the development is compliant with the Comprehensive Plan and zoning code. The city does have the right to deny the requests. Rezoning would follow once land use is changed.

Those opposed to the project mostly had issues with traffic.

According to the Ramsey County Sheriff's Office, there have been 15 accidents at the intersection of Highway 96 and McMenemy in the last five years and one at Oak Grove Parkway and McMenemy.

The city's consulting engineer, SEH, reviewed trip estimates provided in the applicant's submittal, and also analyzed the potential trip generation for an office/warehouse use on the property. The analysis showed estimates similar to the applicant's study.

SEH showed a total of 928 trips if an office/warehouse occupied the site and 1,060 trips if multifamily housing was constructed. Traffic data from the applicant showed 1,690 daily trips to and from an office, compared to 1,112 by residents of the units.

At the public hearing, Nicole Roy called the calculations underinflated. When she bought her house on Foothill Terrace five years ago, Roy said she looked closely at zoning to make sure her neighborhood would remain quiet and doesn't want to see it change. Tim Ewald echoed her thoughts on the traffic data. "It seems very low," he said, adding a transient population could impact his property values.

Resident Chris Messerly, Timberline Trail, urged council to deny the application, noting safety issues. According to Messerly, an attorney, the plan has insufficient sight lines and is likely not allowed under traffic laws. "The only exit for my entire neighborhood is McMenemy," he pointed out. "Increased congestion means increased traffic concerns. This doesn't belong here."

A representative from IC System, John Erickson, told council his company purchased the lot in question 38 years ago when they relocated from Arden Hills. "It was for expansion of our business, but proved too grandiose," he said. Since there is "no good reason" to hold the land, it was listed in 2018.

"We've been approached occasionally," Erickson recalled. Walgreen's backed out, Lifetime Fitness showed interest. A hockey rink was proposed at one point. There have been four offers: all residential. One proposal was for 300-plus apartment units.

The company liked At Home's plan, Erickson said. "They put up nice projects. It's a 30-year-old family business, and we like them. It struck the right balance and would be a good addition for the city. Vadnais Heights would be lucky to have them."

At Home principals also attended the meeting to answer questions. Their architect emphasized the quality of the luxury units, noting they use "high-end condo finishes in a rental unit."

Their target market is empty nesters who rent by choice, a trending lifestyle for baby boomers and millennials alike. Units would rent at market rate. A three-bedroom townhome, for example, would go for $2,500 per month.

Asked what kind of income would be required to pay those rates, principal Alan Spaulding said a rule of thumb is income of three times the monthly rent.

Spaulding emphasized that At Home is an apartment manager, not a developer. "Our motto is always buy, never sell," he said, to assure residents they are committed to the project.

Those in the council chamber were also shown a promotional video by At Home featuring The Reserve at Mendota Heights, a resort-style apartment complex that features many upscale amenities. The complex has 139 units. Over half of its tenants are older than 50.

The Planning Commission recommended denial of At Home's application 6-1 at its December meeting, noting the project did "not fit with the character of the surrounding area." Council tabled a decision until its Jan. 21 meeting. The application review period was also extended another 60 days.