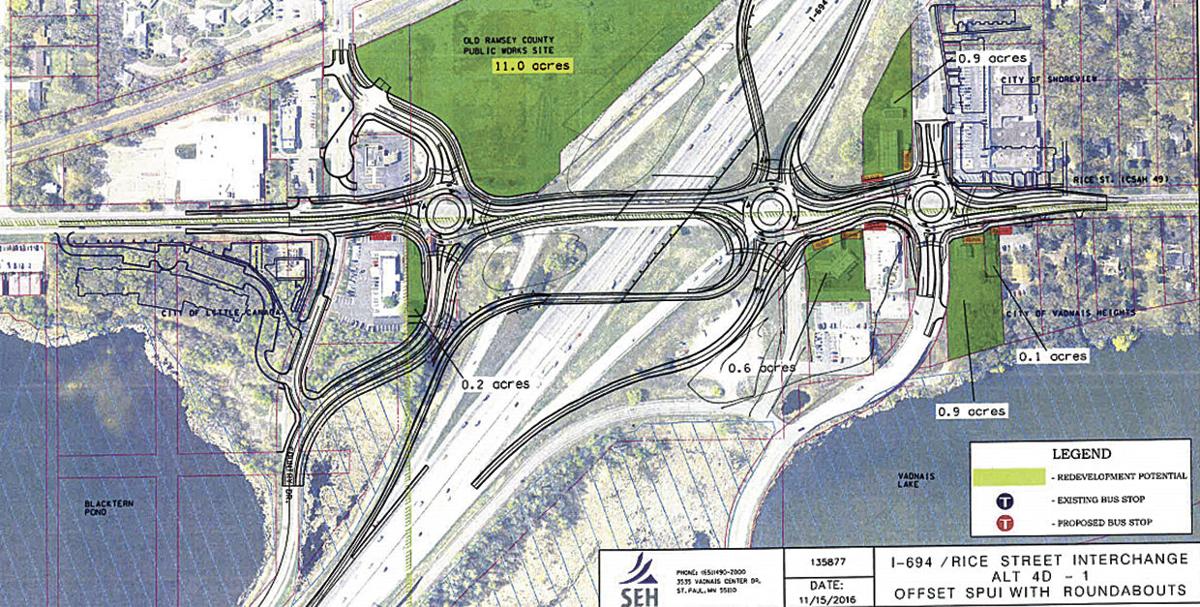 The top alternative for the interchange of the proposed Rice Street bridge, based on county analysis. The design includes three roundabouts. One would be located south of I-694 and connect Lake Owasso Boulevard and Country Drive, one would be located north of I-694 and include all on- and off-ramps for I-694, and one would connect County Road E and Vadnais Boulevard. 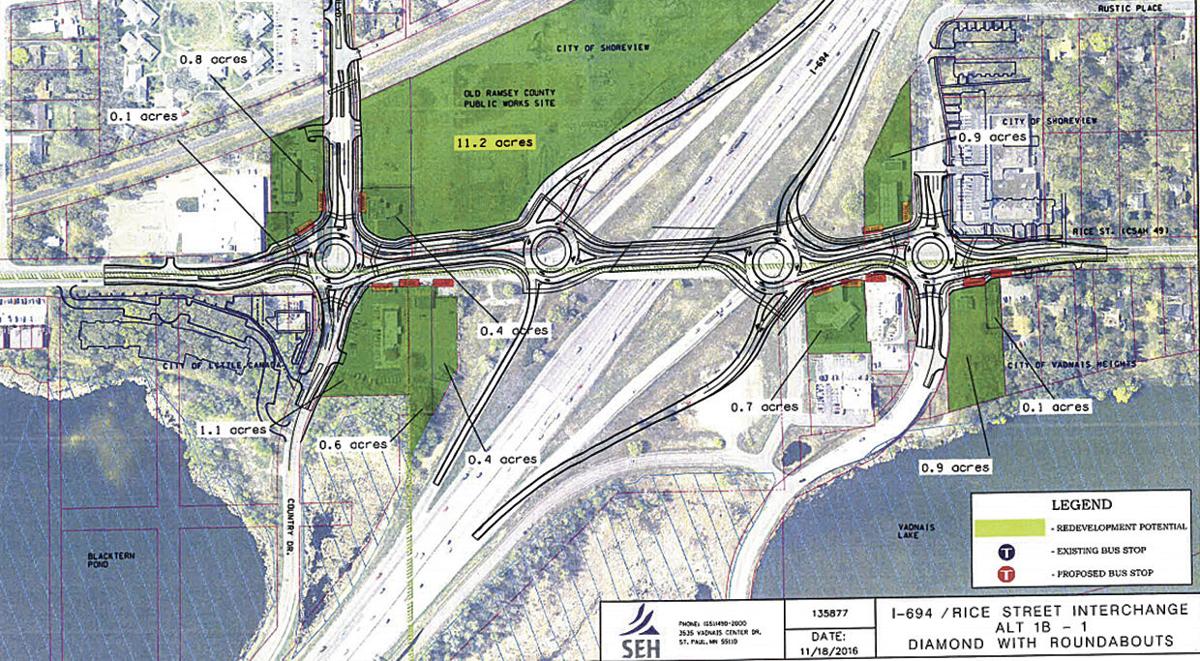 The second alternative for the interchange of the bridge includes four roundabouts. 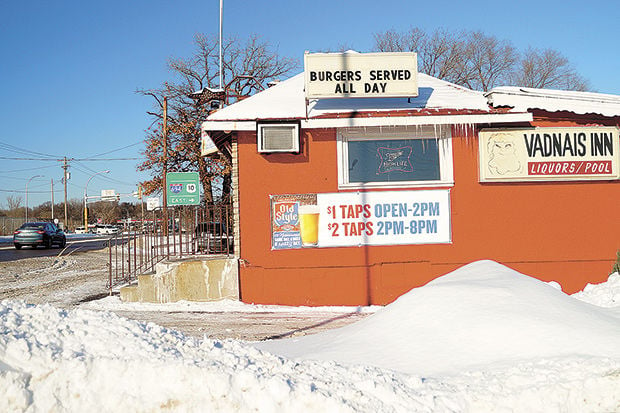 The Vadnais Inn is situated next to the Rice Street bridge that may be replaced in 2019. One of the top preliminary design alternatives would basically take the building off the map.

The top alternative for the interchange of the proposed Rice Street bridge, based on county analysis. The design includes three roundabouts. One would be located south of I-694 and connect Lake Owasso Boulevard and Country Drive, one would be located north of I-694 and include all on- and off-ramps for I-694, and one would connect County Road E and Vadnais Boulevard.

The second alternative for the interchange of the bridge includes four roundabouts.

The Vadnais Inn is situated next to the Rice Street bridge that may be replaced in 2019. One of the top preliminary design alternatives would basically take the building off the map.

VADNAIS HEIGHTS — Ramsey County's preliminary top-ranking alternative for the new Rice Street bridge and its accompanying intersections runs right over the Vadnais Inn — which has been around for about 80 years.

The preliminary top-ranking alternative presented by Ramsey County and consultant Short Elliott Hendrickson (SEH) at a Vadnais Heights City Council workshop earlier this month includes three roundabouts at a cost of $27.1 million, according to documents released at the workshop.

The roundabout south of the freeway would displace part of the current Vadnais Inn building, according to maps released at the meeting. That was confirmed with Beth Engum, county project manager, after the meeting. Some of the land of other businesses would also be affected.

The almost 20-year owner of the Vadnais Inn bar said the building has been around since the 1930s.

But the preliminary top alternative has not yet been chosen by the county as the preferred design alternative. It just came out on top in an analysis of cost and ideal traffic operations for 2040.

Businesses that lose more than 50 percent of their access may get compensation, Engum said. The county may also have to buy out businesses, SEH project engineer Mark Benson said. The cost of the project includes paying businesses, Engum added.

Under their development agreements, the renovated Taco John's set to open soon and the Subway under construction in Little Canada across the street from Caribou were permitted no access to Rice Street, Engum noted.

Vadnais Heights council members weren't so sure the time saved by the traveling public would be worth the possible cost of lost business.

“It doesn't strike me that two minutes is so burdensome that I want to redo that entire area and lose businesses,” said Mayor Bob Fletcher. From his perspective, if certain designs prevail “the Vadnais Inn is history.”

Engum noted that big businesses nearby, like Deluxe and PaR, have said the intersection is a “problem” for commuters but noted that “also may be linked to I-694 and an extra lane.”

A local business owner at the meeting said the intersection is no longer “busy like before the (I-)694 third lane — I don't find it bothersome at all,” she said.

“We don't hear the outcry of people saying they need to get through that intersection 40 seconds faster than they do,” Fletcher said. “Try to find an option you can lobby for that includes not taking economic development opportunities from us. If you can't do that, just expect we might go to the Legislature and ask against (the project).”

The goals of the project would be to improve traffic operations, provide access to a 13-acre former public works site in Shoreview to be developed, assist development activity in Shoreview and Little Canada and provide pedestrians and bicyclists with a safer way to cross the bridge and access trails on the north and south sides of the bridge, Engum explained.

“It's pretty dangerous if you want to try to walk across, especially if you have children with you,” Engum said.

The bridge is also almost 60 years old. It was built in 1958 and is actually listed as an historic bridge on the Minnesota Department of Transportation website due to its use of prestressed concrete beams.

When Engum first researched the historical significance of the bridge she thought the bridge may not be able to be taken down, but learned there is an exemption.

The bridge has been owned by the county since ’99 when MnDOT passed on ownership. MnDOT had committed to replacing the bridge but has only committed $3 million for about 10 years from now, Engum said.

“Basically, MNDOT hasn't really had this as a priority in their program,” she said.

Funding for the bridge project was sought from the Legislature last year, but the $20.5 million project didn’t pass, along with everything else in the nearly $1 billion bonding bill.

The county is currently seeking about $7 million in federal funding and has asked for $23.5 million from the 2017 Legislature, Engum noted.

“Governor Dayton has also proposed that we fund upgrades to this interchange, so I'm hopeful this important project will finally become reality this year,” she said in a statement.

Public meeting to hear ‘what people are thinking’

A public meeting and open house on the topic will be held 4 to 7 p.m. Tuesday, Feb. 21 at the Vadnais Heights Commons, 655 County Road F East.

“It will be the first time we are really out in the public getting feedback,” Engum noted. “That will be really important for us to make a decision. It will be interesting to hear what people are thinking.”

The county plans to decide on an alternative in late summer and request consent from the three involved cities — Vadnais Heights, Shoreview and Little Canada — in the fall.

“All three cities would need to approve it,” said City Administrator Kevin Watson. A public hearing would be held.

Construction would be anticipated to begin spring 2019.

Sara Marie Moore can be reached at 651-407-1235 or vadnaisheightsnews@presspubs.com.

Modern roundabouts are the safest form of intersection in the world (much more so than comparable signals). Visit the Insurance Institute for Highway Safety for modern roundabout FAQs and safety facts. Modern roundabouts, and the pedestrian refuge islands approaching them, are two of nine proven safety measures identified by the FHWA, http://tinyurl.com/7qvsaem
The FHWA has a video about modern roundabouts on YouTube, or check out the IIHS video (iihs dot org). Links: