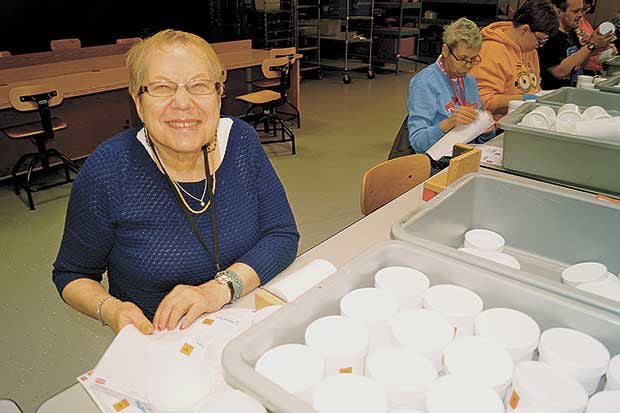 Arlene labels medical canisters during a shift at Merrick Inc., a top employer of people with disabilities in the northeast metro. 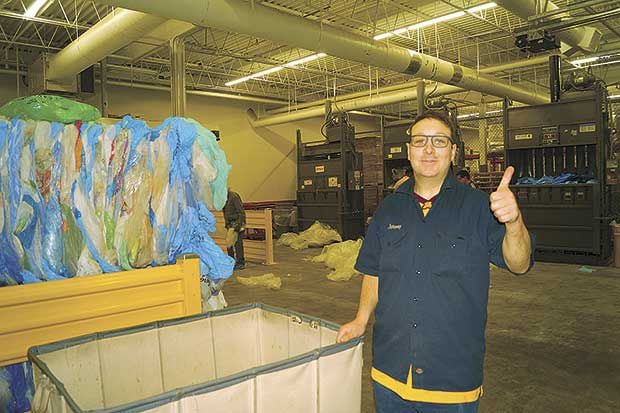 Jeremy, of Arden Hills, works in the plastic recycling department at Merrick. Each year, the department keeps about 1 million pounds of plastic out of landfills and incinerators. It is made into decks and lawn furniture instead.

Arlene labels medical canisters during a shift at Merrick Inc., a top employer of people with disabilities in the northeast metro.

Jeremy, of Arden Hills, works in the plastic recycling department at Merrick. Each year, the department keeps about 1 million pounds of plastic out of landfills and incinerators. It is made into decks and lawn furniture instead.

VADNAIS HEIGHTS — Merrick Inc. job coach Curtis Brunton rushed home to Maplewood to change into nicer clothes after learning he had been reassigned to a crew heading to Kowalski's for a shift last week.

Brunton, who oversees work crews of people with disabilities, was filling in for a sick staff member. But filling in is nothing new for the 10-year veteran — he typically oversees a crew at a pharmaceutical company, a position he has been filling in for since last April.

Merrick is still looking for a replacement staff member almost a year later, he said. Over the course of a week, Brunton may fill in at up to five or six different job sites if another staff member is sick or leaves, he added.

But Brunton enjoys the variety. “There is never a dull moment,” he noted.

The tone is a little more somber at the desk of Executive Director John Wayne Barker. The direct care staff turnover percentage nearly doubled over the last three years, from 11 percent in 2013 to 24 percent in 2016, he explained. The average tenure of the approximately 80 direct care staff also dropped from seven to six-and-a-half years.

“Most of it is because of wages,” Barker said. The starting $13.30/hour wage is competitive with fast food restaurants, he noted.

“We are not given the resources by the government to raise their wages,” he said. Merrick receives funding from the federal, state and county government from its clients. Barker said it is not enough.

Now Merrick, as part of the Minnesota Organization for Habilitation and Rehabilitation (MOHR), says it should be the nonprofit sector's turn. Every five years, the Legislature decides the amount of money that will be given to direct care facilities for services for those with disabilities. This year is the year, but the last increase was not enough to sustain workers, Barker said.

“It is estimated that there are 8,700 unfilled direct support positions in Minnesota right now, and that number is growing as pay rates continue to lag behind other industries," said Mike Burke, MOHR president. MOHR is calling for a wage increase of at least 4 percent to boost wages closer to a livable wage for Ramsey County, which is about $16/hour for two adults with two children, according to the wage calculator developed by MIT (Massachusetts Institute of Technology). Barker said the metro average wage is $13.60/hour. Merrick's average is $14.25/hour. A 4 percent increase in state funding would bump Merrick's average wage to $15.40 in 2018, Barker noted.

Merrick's wages are determined by the amount of money it receives from the state and the amount it costs to provide services.

“Our revenue is controlled by the state,” Barker explained. It receives $75 per client from the government per day for services, but it costs $80 to deliver, he noted. Over the course of a year, that is about a $450,000 gap, he noted.

“On July 1, we are already hitting the ground running trying to cover that,” said Karen Herrera, development and communications director.

Unless a large ongoing donation suddenly appeared, Merrick couldn't independently increase its wages, Barker explained. Grants, donations and pull tabs fill in the gap that is already there. Merrick is the top seller of pull tabs in the state, Herrera noted.

Workers with disabilities paid based on production

About 375 clients either work or engage in enrichment activities at Merrick. About 80 to 100 of the client's are in the life enrichment program and do not work.

Clients in the enrichment program participate in art projects, gardening, outings and other activities.

“It is such a nice way to spend the day with these guys,” said enrichment manager Elizabeth Tauer, of White Bear Lake.

Work options abound based on a client's needs and interests. About 80 clients work onsite in packaging or assembly projects requested by businesses. About 30 more work onsite baling plastic and shredding paper from companies to be recycled. Some go out into the community in work crews for about four hours a day. Sometimes, a client will end up being hired directly by a business.

Mike, of Shoreview, has worked at Merrick for 26 years. When the Press stopped by he was bagging eight screws into individual baggies. Mike is visually impaired but bags the screws with an accommodation by placing one screw at a time into an eight-dimpled piece of wood and then gathering them all up into a bag.

“It's kind of easy,” Mike said, noting he likes to spend the money he earns on activities.

Clients are paid based on their rate of production, Barker said. That can be below minimum wage. The payment method allowed by the Fair Labor Standards Act — called a commensurate wage — is  controversial, but Barker said it enables his clients to get work.

“I believe it is the first example of reasonable accommodation,” he explained.

About 100 of Merrick's 300 workers are paid minimum wage or higher and the rest are paid below minimum wage, Barker said. Workers make anywhere from about $1 to $12 per hour, he added. The pay rate is based on what they are able to do compared to an average worker, whether they are paid per piece produced or hourly.

“It pays people exactly what they should — each based on what they produce,” he said. Some workers, based on their unique needs, only work 20 minutes of the day when they are at Merrick, he added.

The payment method inspires civic-minded businesses to give people with disabilities the work, Barker explained.

It was 1978 and back then children with disabilities wouldn't go to the mall to visit Santa due to stereotypes.

“I thought it was a one-night gig and it's turned into a 38-year career,” Barker remembered. He began at Merrick 19 years ago.

Merrick began in 1964 by a group of parents who wanted a place for their 15 young adult children to be engaged. It has been in its current building at 3210 Labore Road in Vadnais Heights since 2003.

Sara Marie Moore can be reached at 651-407-1235 or vadnaisheightsnews@presspubs.com.