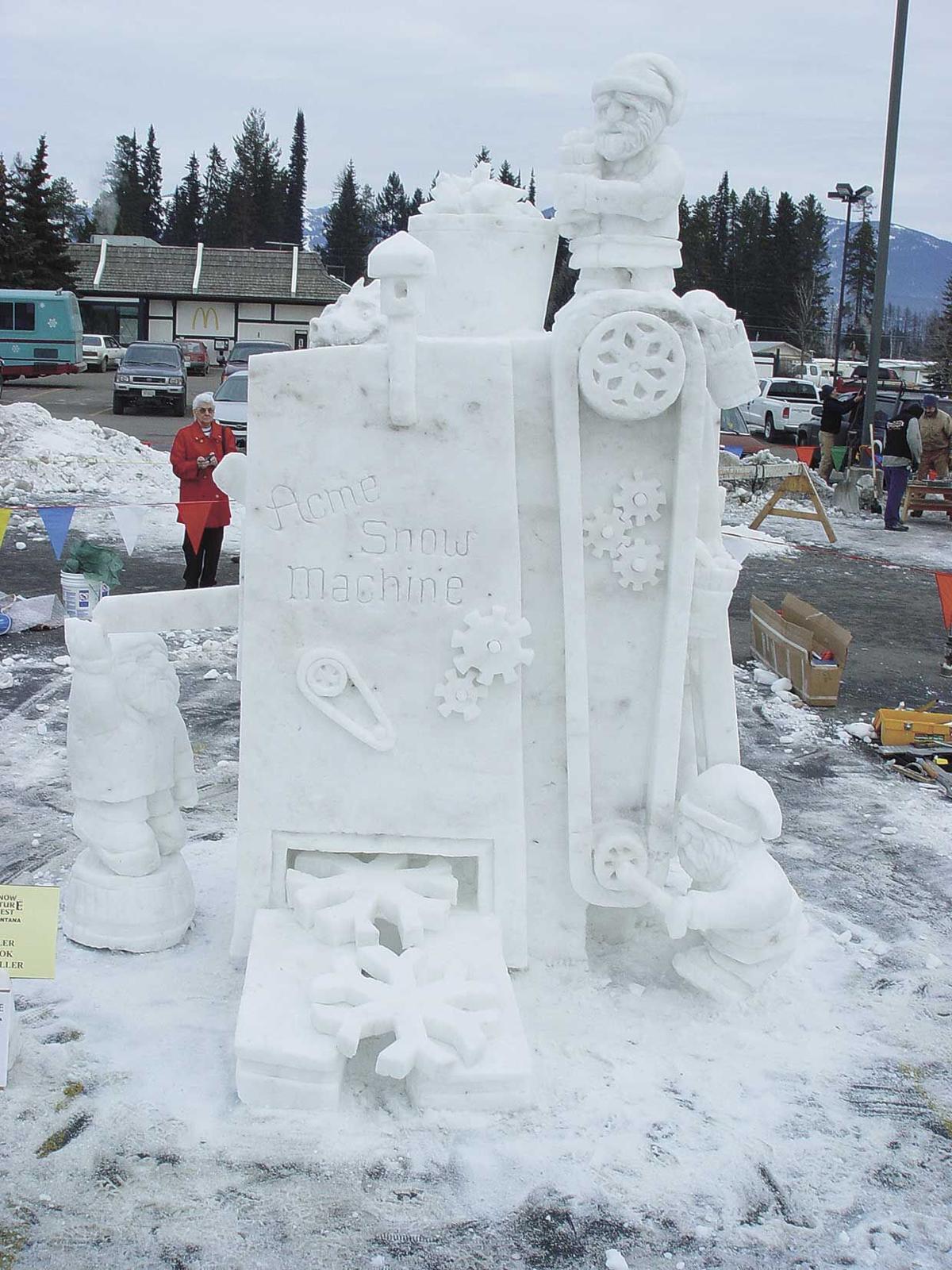 A sculpture of an Acme snow machine carved by Jon Baller and his team in Montana.

A sculpture of an Acme snow machine carved by Jon Baller and his team in Montana.

While growing up in east St. Paul, Jon Baller liked to draw but never dreamed that someday he'd be competing in a national ice sculpting competition.

The longtime Stillwater resident and his team are the current Minnesota state snow sculpting champions. They will represent Minnesota in the U.S. National Snow Sculpting Championship in Lake Geneva, Wisconsin, Feb 2-6. Baller’s son Josh is a team member, along with Baller’s cousin Curtis Cook.

Baller's interest in ice sculpting began 35 years ago when he saw an ad in the newspaper that said the St. Paul Winter Carnival was looking for ice sculptors for a snow sculpting competition. It was the first year the carnival held the competition.

“I thought it sounded fun, so I got a couple of guys I was going to school with and we made a team. We had no idea what we were doing and did a really bad sculpture (it was suppose to be a beach scene with a bunch of snow people laying on the beach and another snow man surfing) and ended up knocking the entire block down,” Baller laughed. “We didn't know there was going to be an ice block, and we knocked the block down and then we had to build it back up. That was way more work than it needed to be.”

“We have done ice sculpting at the St. Paul Winter Carnival every year since then, and we are the only team that has done it every year,” he added.

Throughout the years, Baller has coaxed his brothers, sisters and friends into ice sculpting, and they also have competed in the carnival’s snow sculpting contest. “One year we had five teams in the competition,” he said.

Baller and his team has also participated in the Aquatennial sand sculpting competition at Lake Nokomis.

“Sand is a little different, because it doesn't stick together like snow does,” Baller said. “Everything sort of looks like a mound. We did a collage of the Aquatennial images and in the middle it had the downtown Minneapolis skyline.”

Baller said he likes convoluted sculptures, and his favorite thing to sculpt is something different. “I just like creating sculptures that have many pieces to it.”

“We did one called ‘Keurig Version .2’ where we made this big complicated thing with pipes, bells, tanks and electrical equipment and we had a guy sitting on a corner with a big lever and on the other end was a large cup of coffee,” he said. “I enjoy doing stuff like that, where people have to stop and really take a look at it with all of the little pieces.”

Baller said the year his team won the Minnesota State competition at the Winter Carnival, the title of the sculpture was “Vulcanstein.” A Winter Carnival Vulcan was splayed on an operating table, and a mad scientist was re-animating him. “We had this big lab set up with a table, and we had a couple of brains sitting on the table, beakers, and all sorts of stuff,” he said.

Overall, Baller and his team have participated in more than 50 competitions and have won many prizes at the state and regional level in both snow and sand sculpting. “We've been in the national competition seven or eight times,” Baller said.

Baller and his team are not competing in the World Snow Sculpting Championships Jan. 18-23 in Stillwater, but Baller was asked to create a demonstration snow sculpture at Lowell Park. “We are going to do a demo of something like a lumberjack or something along those lines,” he said.

Baller is an avid runner and biker and loves cruising the Brown’s Creek trail. “I have a boat on the St. Croix, and we go out there and spend a lot of time up north in the woods,” he said.

When he's not sculpting, Baller is an engineer at PaR Systems, a company in Shoreview that makes robotic systems and software for the aerospace industry.

“What I like about sculpting is spending time with my family, friends, my son and cousin. The camaraderie with the other teams is fun, “ Baller said. “It's fun to make something, plan it out and actually see it sitting there after you're done that is 10 times bigger than your little model.”

Staff Writer Noelle Olson can be reached at 651-407-1229 or lowdownnews@presspubs.com.