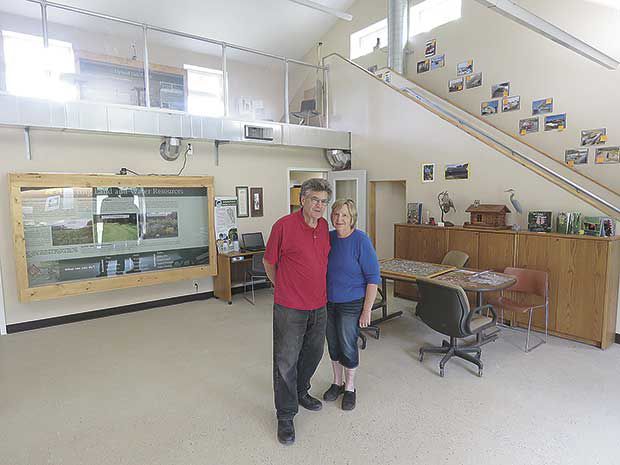 Tony Manzara and Connie Kirk stand inside the newly constructed Sally Manzara Interpretive Nature Center, which they dedicated in memory of Sally Manzara, a nature lover who died of pancreatic cancer in 2015. 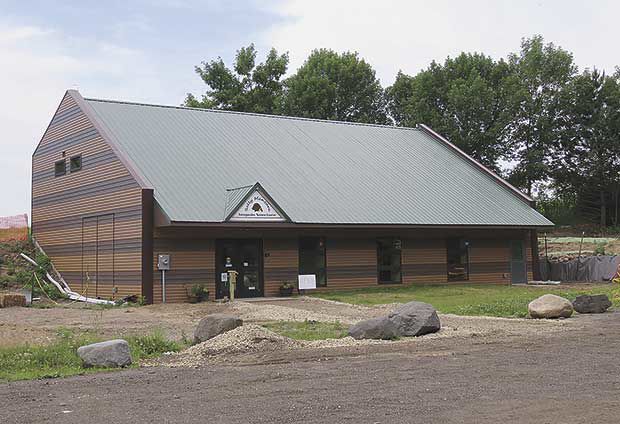 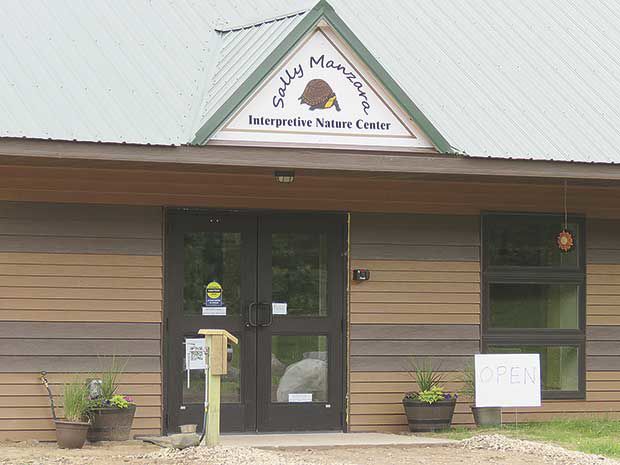 Over the entrance of the new nature center is an image of the center’s mascot, Emy the Blanding’s turtle. The Blanding’s turtle is an endangered species that is known to live in the Sunfish Lake Park area. The turtle’s scientific name is Emydoidea blandingii, which is where the nickname “Emy” comes from.

Tony Manzara and Connie Kirk stand inside the newly constructed Sally Manzara Interpretive Nature Center, which they dedicated in memory of Sally Manzara, a nature lover who died of pancreatic cancer in 2015.

Over the entrance of the new nature center is an image of the center’s mascot, Emy the Blanding’s turtle. The Blanding’s turtle is an endangered species that is known to live in the Sunfish Lake Park area. The turtle’s scientific name is Emydoidea blandingii, which is where the nickname “Emy” comes from.

LAKE ELMO — Tony and Sally Manzara spent their last anniversary walking the trails of Sunfish Lake Park while butterflies glided about them. Sally was declining in her fight against pancreatic cancer, but Tony asked her what she thought about having a nature center in her honor.

“She thought that would be really nice,” Tony said.

This June, the Sally Manzara Interpretive Nature Center (SMINC) opened its doors to the public for the first time.

Sally was a teacher, librarian and a community and church volunteer. She loved birdwatching, nature centers, museum gift shops and spending time outdoors, so a nature center seemed like an excellent way to celebrate her life when she passed away in 2015. The money the pair had saved for their travel during retirement became the seed money to build a new nature center in one of the local parks she loved best.

After Sally’s death, Tony approached the Lake Elmo City Council to ask whether they’d consider a nature center at the park, and he was told that the city had always had something like it in plans for the future. However, the city didn’t want to be responsible for operating it.

It was the perfect opportunity. With lots of help, Tony created the nonprofit Friends of Lake Elmo Sunfish Lake Park, which raised all the funds and made the plans necessary to construct the new center. It also supplies the volunteer labor needed for daily operations.

Around the same time, Tony reconnected Connie Kirk, an old friend of his and Sally’s, at a church dinner. When he explained his plans for the nature center, Connie began to share ideas for programs and improvements that would make the center a welcoming place for all. The pair began to work closely together to make the project into a reality, and ended up getting married in 2016.

Together, Connie and Tony worked hard and found willing helpers everywhere to build the nature center—people donated their time and services, and sometimes walked in the door wondering what they could do to help.

“The right people showed up at the right time,” said Connie. “There are so many good, giving people out there and they’re seeing this as the kind of place that they want to be a part of. That’s the spirit of the Sally that I knew. Sally was a giving person; she was a caring and a sharing person, and if somebody needed something, she was right there to help them.”

“She would have loved it,” Tony said.

The SMINC broke ground in September 2017, and held a grand opening celebration June 2.

The wording of the conservation easement on the property gave the center the option of being a nature observation or interpretive center.

“It’s interpretive,” Tony said. “We don’t want to say, ‘Here are the things we saw here.’ We want to say, ‘Why are these creatures here? What do they do here? Why are these rocks here? How come we have this particular kind of fish in the lake?’ That gives the kids especially something to think about. A lot of adults are too busy with daily life to think about things like that, but if you get kids in early grade school thinking about things like that, you get them into different professions that they never would have considered.”

Connie and Tony want the center to be a little different than other nature centers in the area. For one thing, it’s a bit smaller, so they’d like to see smaller, more comfortably sized groups visiting. They’d like to hold a regular Quiet Day for visitors who have autism spectrum disorders, and hope to be a field trip location for local senior centers and homeschool children. The center already has a bus that will eventually be converted into a traveling nature center.

Events such as guided bird walks, buckthorn removal and other nature activities are already planned for the summer. There will also be three art-centered summer camps this July. Tony and Connie have noticed that people frequently use the park to walk dogs, and to cross country ski in the winter. They hope to embrace these hobbies by perhaps hosting an occasional pet checkup day, or possibly renting snowshoes and having snowshoe lessons on the trails.

Volunteer help is still needed, but once things get running smoothly, Tony hopes the center will be open daily year-round. There is no fee to visit SMINC, but free will donations are encouraged.