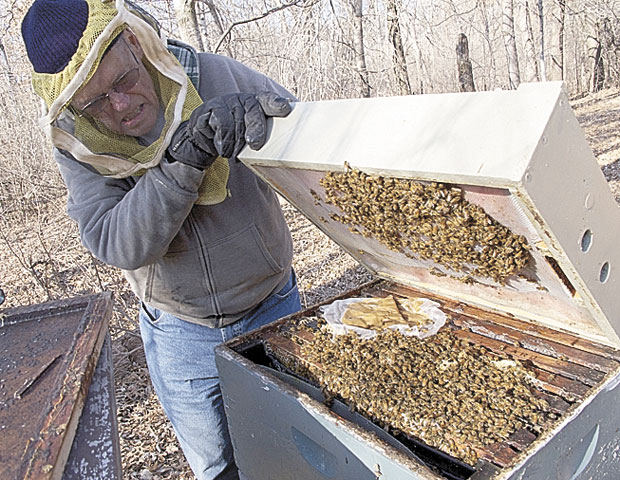 Bob Sitko is doing his part to ensure we all have healthy fruits and vegetables to eat for years to come. In addition to keeping 16 beehives at his West Lakeland home, the master beekeeper teaches classes at Century College. — Submitted 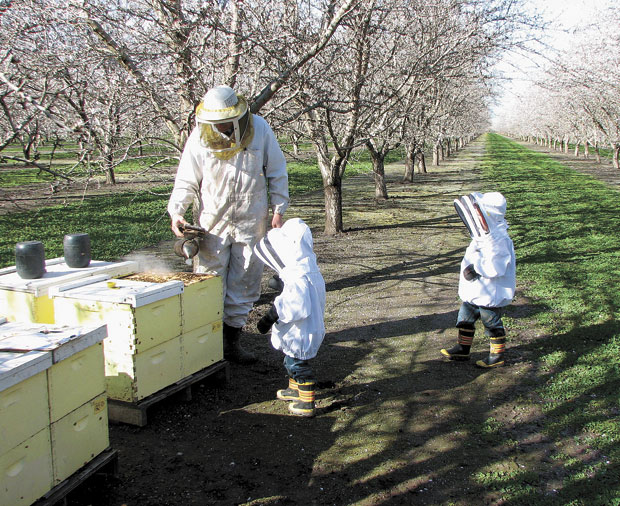 Sitko and his young crew work with their hives. — Submitted

Bob Sitko is doing his part to ensure we all have healthy fruits and vegetables to eat for years to come. In addition to keeping 16 beehives at his West Lakeland home, the master beekeeper teaches classes at Century College. — Submitted

Sitko and his young crew work with their hives. — Submitted

WEST LAKELAND — Bob Sitko is doing his part to ensure we all have healthy fruits and vegetables to eat for years to come.

In addition to keeping 16 beehives at his West Lakeland home, the master beekeeper teaches classes at Century College, holds workshops for gardeners, seniors, Scouts, schoolchildren and even preschoolers, and is a member of both the Minnesota Hobby Beekeepers Association and the newly formed Honey Bee Club of Stillwater.

Sitko also chairs Swarm Chasers, a group of hobby beekeepers who respond to emergency calls to remove — and preserve — swarms of bees from wherever they’re unwanted.

“It’s a public safety thing,” Sitko said. “If you have a swarm of bees in your yard, call the sheriff. They get hold of me and I have a list of beekeepers in the area — I call them till I find one [who’s] home that can remove the swarm.”

When Sitko and his wife Darlene started beekeeping 35 years ago, it was to control Sitko’s hay fever allergies. A co-worker advised him to take a spoonful of raw honey every day to desensitize his body. “It had to be from within 20 miles of your home so you’d get the same pollens you’re subjected to during hay fever season,” he explained.

Though it eventually worked, Sitko said, it took 10 years to control his allergies. By then he had taken a community education beekeeping course, had absorbed all he could from courses at the University of Minnesota, and started giving pointers to others interested in the hobby.

While Bob handles the bees, Darlene helps him teach classes and sell the honey. The couple has been in the business so long, they don’t have to go to fairs or farmers’ markets anymore to sell the approximately 1,500 pounds of honey a year their bees produce.

Part of beekeeping is educating the public about the insects. Sitko is one of about 30 volunteers from the Minnesota Hobby Beekeeping Association who talk to groups of all ages. “I tell kids if you go up to a flower with a bee on it, you can just brush it aside and it’ll buzz off to another flower. Just don’t go and knock on the hive. Don’t go near hives without an adult around, and don’t throw any rocks or sticks at it because that’s teasing the bees.”

Sitko has noticed attitudes slowly changing as people realize bees are needed to pollinate crops and flowers. This summer he’s gotten about 35 calls to remove honey bee swarms — and about triple that number of calls on hornets.

“People can’t tell the difference,” he said. “I ask them to send me a picture. If it’s hornets, we refer them to a pest control company.” Beekeepers who remove the honey bee swarms don’t charge for the service, Sitko said; they take them home and start a new colony, which is worth about $80.

Like other beekeepers, Sitko is concerned about the future of the species, since 30 to 40 percent of colonies are lost each year. “Can you imagine if a dairy farmer or chicken farmer lost 30 percent of his livestock every year?” he asked.

Today the U.S. has about half the number of colonies that existed in the 1940s, he said, due to diseases, pests like mites, the monoculture created by miles and miles of cornfields where there used to be wetland and flowers, and pesticides used on crops and flowers. He wonders what such effects have on humans if they’re now killing bees.

While keeping the hives isn’t extremely time-consuming, Sitko said, it requires knowledge of the insects and a commitment to follow local ordinances. Stillwater’s beekeeping ordinance, adopted in late 2012, requires that applicants complete a beekeeping course, among other requirements.

In addition to explaining the many medicinal applications of honey and bee venom, Sitko’s classes detail the equipment required, the biology of the bee, managing the hive, and other aspects of the hobby. He said it’s important for anyone considering the hobby to be stung at least once, so they know whether they’re allergic, and to have a mentor who knows that they’re doing.

The Honey Bee Club of Stillwater was formed after passage of the beekeeping ordinance. It meets at the FamilyMeans building the third Monday of each month. Anyone is welcome, he added.

“If there were no bees tomorrow, you would be eating grains because they’re wind-pollinated,” Sitko said. “Even T-bone steaks depend on bees, as farmers plant alfalfa for their pastures . . . it all depends on bees.

“We’re really tied into bees. If we lose them, there are going to be drastic changes in the supermarket selection — no fruits, no nuts, no apples or oranges or grapefruits. You’d have porridge and fish — that’s about it.”