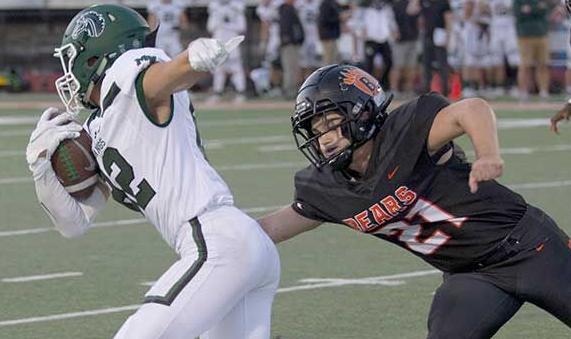 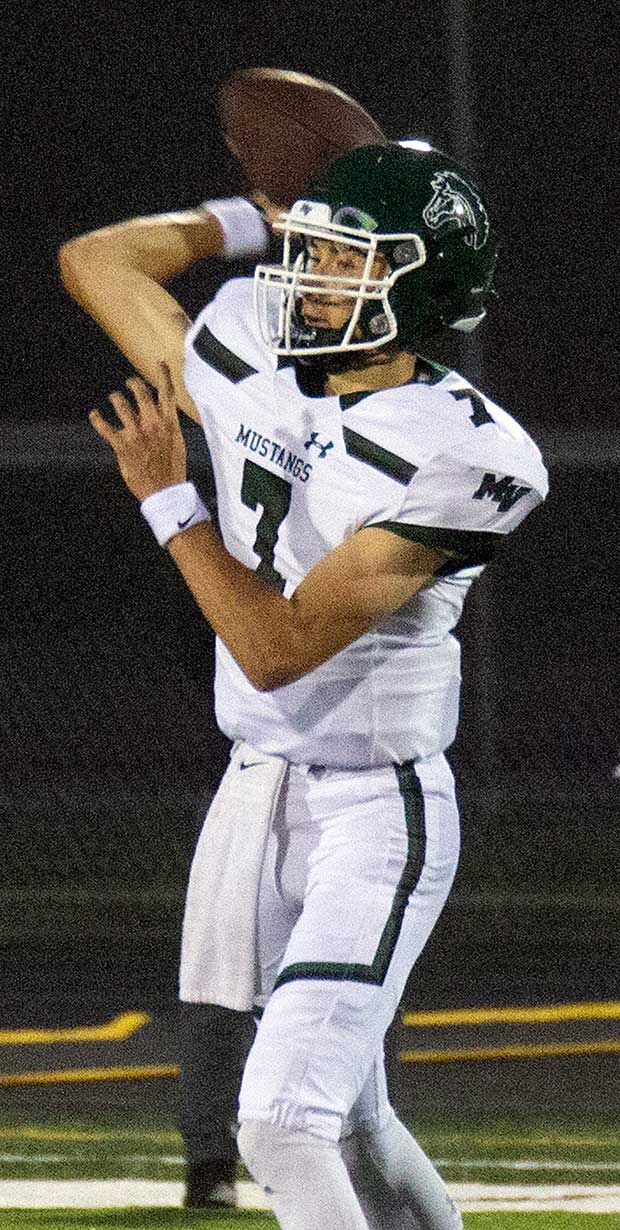 The Mounds View Mustangs, continuing to show a vibrant passing game, hold a 2-2 record after a last-minute, 26-20 loss to White Bear Lake and a 23-13 win over Forest Lake in the last two weeks. The Mustangs go on the road the next two Fridays to play Anoka and Roseville Area.

Owen Wark passed for 305 yards and three touchdowns but it was not quite enough as White Bear Lake beat the Mustangs 26-20 on a touchdown with 17 seconds left.

The Mustangs had Wark drop back on 38 of 44 plays from scrimmage (he was sacked once) and he completed 20 of 37 with no interceptions. Tyler Nystrom caught 10 passes for 145 yards and Dylan Wheeler six for 72.

“Awesome atmosphere and ball game,” coach Aaron Moberg said. “Both teams left it all on the field … Owen stepped up and made some huge throws. Our offensive line did a great job of keeping the pocket clean.”

The Mustangs led 14-0 but the Bears scored the next three touchdowns — a 59-yard pass from Connor Jerrell to Alex Lockwood, three-yard run by Anthony Lewis-Royal, and 19-yard run by Rayshaun Brakes.

Down 20-14, the Mustangs pulled even as Nystrom caught a 13-yard TD pass from Wark in the fourth quarter, alertly snagging the ball off the grasstops after a Bear defender tipped it away. They missed the PAT kick, however.

Wark barely missed on third-and fourth-down passes to the end zone from the 33-yard line with the score 20-20, and the Bears marched 67 yards, capped by Brakes’ nine-yard touchdown with 17 seconds left.

The Mustangs gave up long touchdown passes at the start and end of the game but controlled the action in between to defeat the Rangers.

Sam Hinrichs, a junior in his first game as the featured running back, carried 25 times for 81 yards, including a 14-yard touchdown in the first quarter that tied the score 7-7.

“We are dealing with some injuries at that position,” Moberg said. “Sam stepped in and played awesome. He is a tough kid and we look forward to seeing him grow over the next month.”

Wark fired touchdown passes to Nystrom from 18 yards in the third quarter and to Wheeler from six yards in the fourth quarter. Wark completed 11 of 18 passes for 134 yards, with one interception. Nystrom caught five for 102 yards and Wheeler four for 27.

“Our offensive line played great, opening up some lanes for Hinrichs. They also did not allow any sacks on Owen,” Moberg said. Nystrom, a sophomore, “has a knack for attacking the ball and making big plays.”

Ben Samuel booted a 22-yard field goal and two conversions. Andrew Molenaar gained 26 yards in his lone carry as the Mustangs totaled 108 yards on the ground.