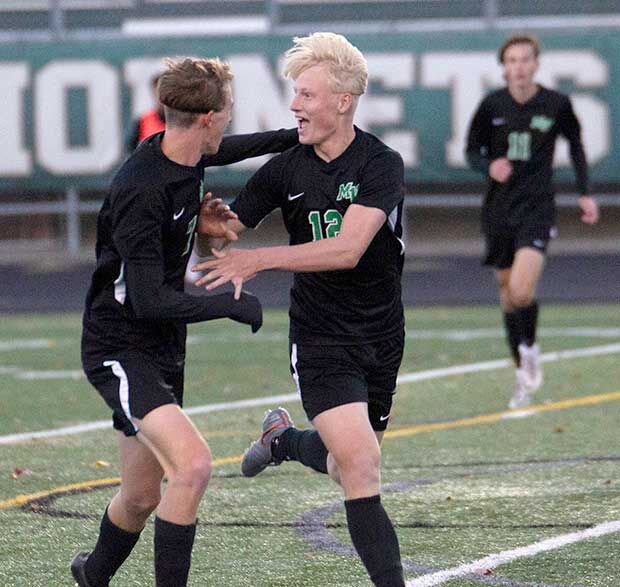 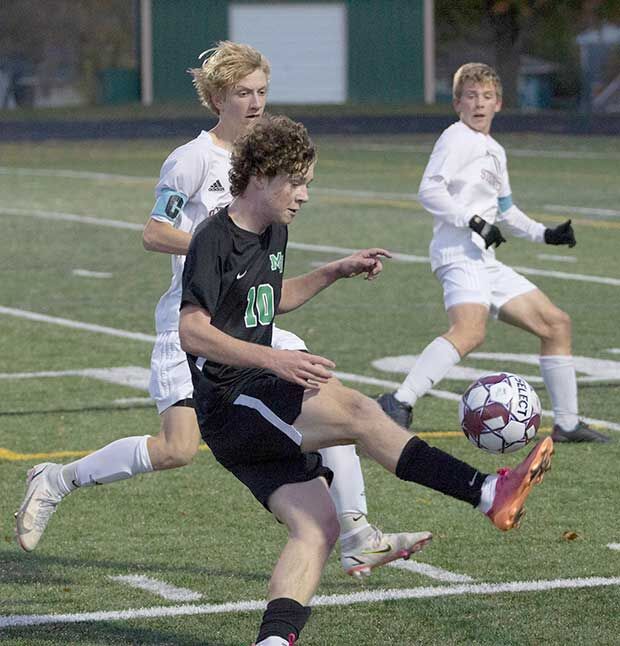 Joseph Swallen of the Mustangs keeps a ball in play at the sideline.

Joseph Swallen of the Mustangs keeps a ball in play at the sideline.

With their usual defensive grit, plus a dose of good fortune, the Mounds View Mustangs got past Stillwater 2-1 on Tuesday night in the first round od the state soccer tournament at Edina’s Kuhlman Stadium.

The No. 4 seeded Mustangs (14-5) avenged a conference loss to Stillwater (15-3-2) and will now face top-seeded Minneapolis Southwest or Rochester Mayo in the Class 3A semifinals. That match will be Wednesday, Nov. 3, at U.S. Bank Stadium, starting 8 a.m.

“We knew Stillwater would give us a battle and they did,” Mustang coach Joe Warren said. “On defense, our guys really stepped up again. They stuck to the plan, and kept the ball in front of them.”

Mounds View’s first goal was a hard bouncing shot by Sam Hoyt from about 15 yards that Pony goalkeeper Derek Hopkins appeared to stop, only to have the ball slip through his hands and into the net. That tied the score 1-1 in the 27th minute.

The Mustangs took a 2-1 lead on an “own” goal midway through the second half. With the ball rattling around in front of the net, a Pony center-back booted it outward but it struck a teammate’s leg and ricocheted back into the net.

“We had a scrum just like that in the first half,” said Warren. “We talked about it at halftime, that anything can happen if we keep applying pressure. It turned out to be an 'own' goal, but we kept the pressure on.”

Stillwater had an early goal by Dom Dobler on a header off a corner kick. After that, Mustang defenders Max Turchin, Aariz Arshad, Asher Wynn, AJ King and Foster Conlin, and goalie Aiden Petrich, hunkered down and prevented any more scoring. Petrich was credited with four saves.

Hopkins settled down after his early gaffe to make six saves for the Ponies.

Mounds View lost to Stillwater 1-0 on Sept. 28. “We had some unfinished business with them,” Warren acknowledged. This marks the second time in their drive to the state semifinals that they’ve avenged a conference loss. They won their section final 3-0 over Park Center, which beat them 4-2 earlier.