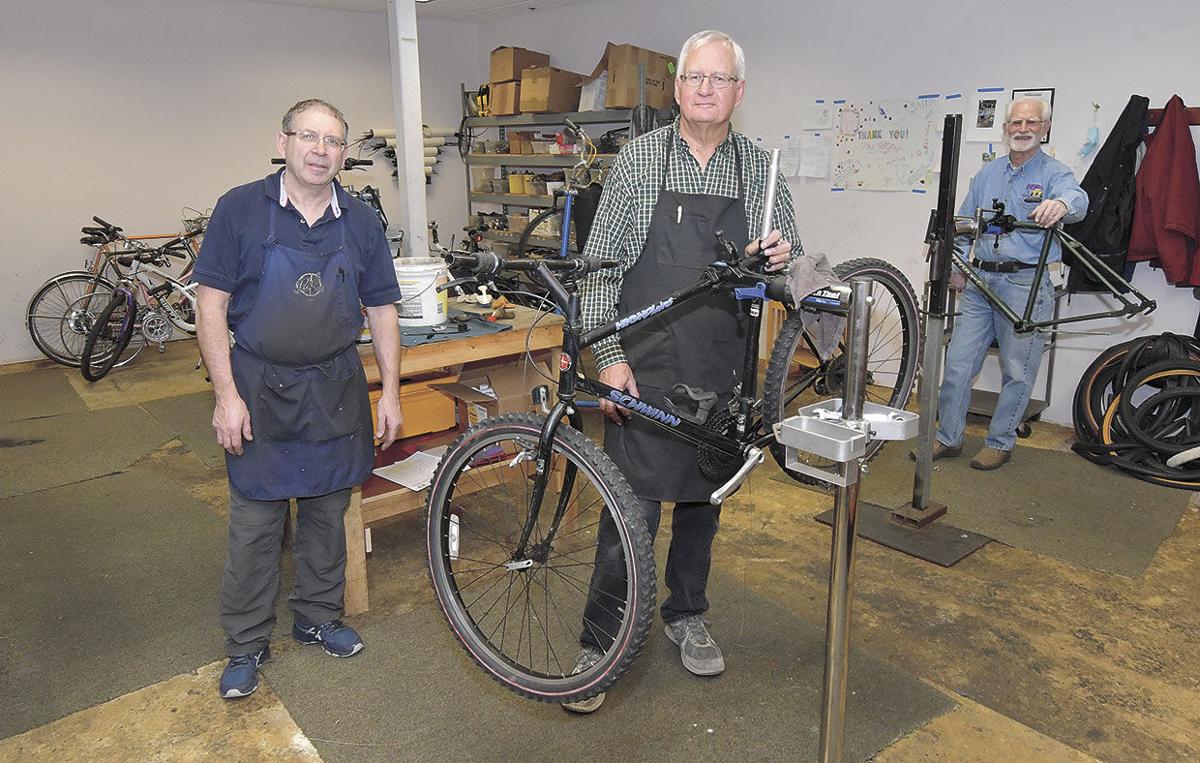 Volunteers Tim Faacks, Lynn Kapaun and Dale Daul in the workshop where they repair hundreds of donated bikes. 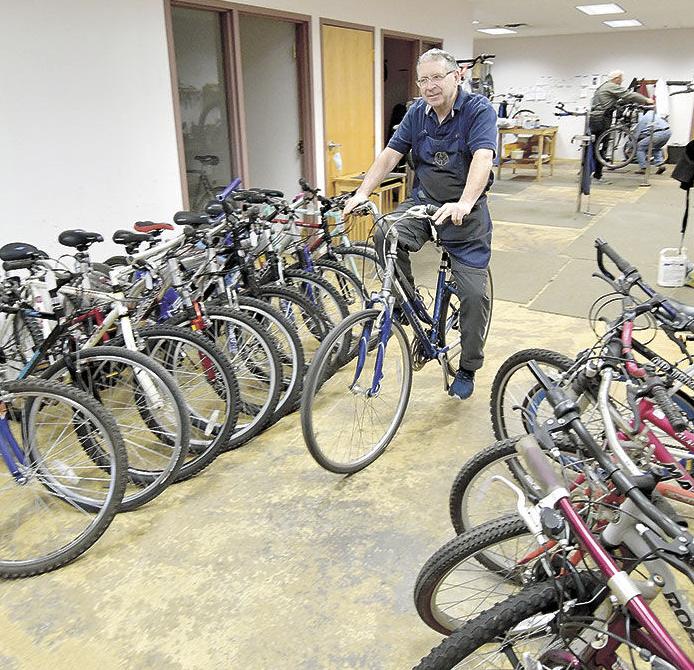 Volunteer Tim Faacks takes a bike he has just repaired on a test spin in the workshop. 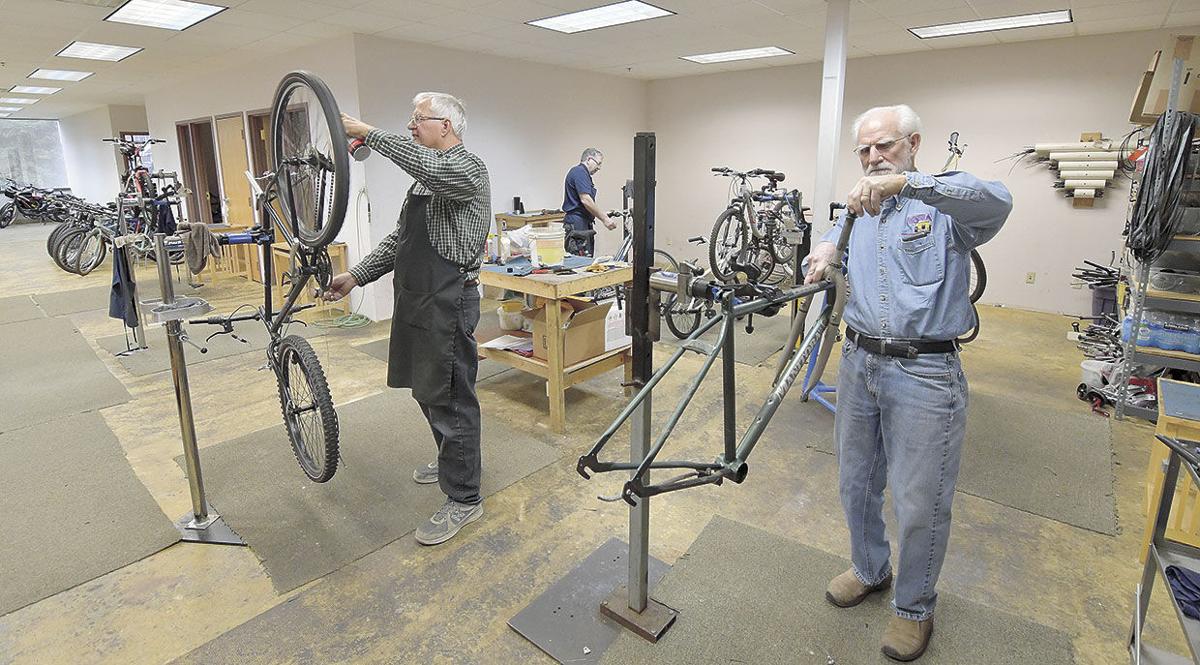 Lynn Kapaun and Dale Daul work on a couple of the hundreds of donated bikes currently in their workshop. 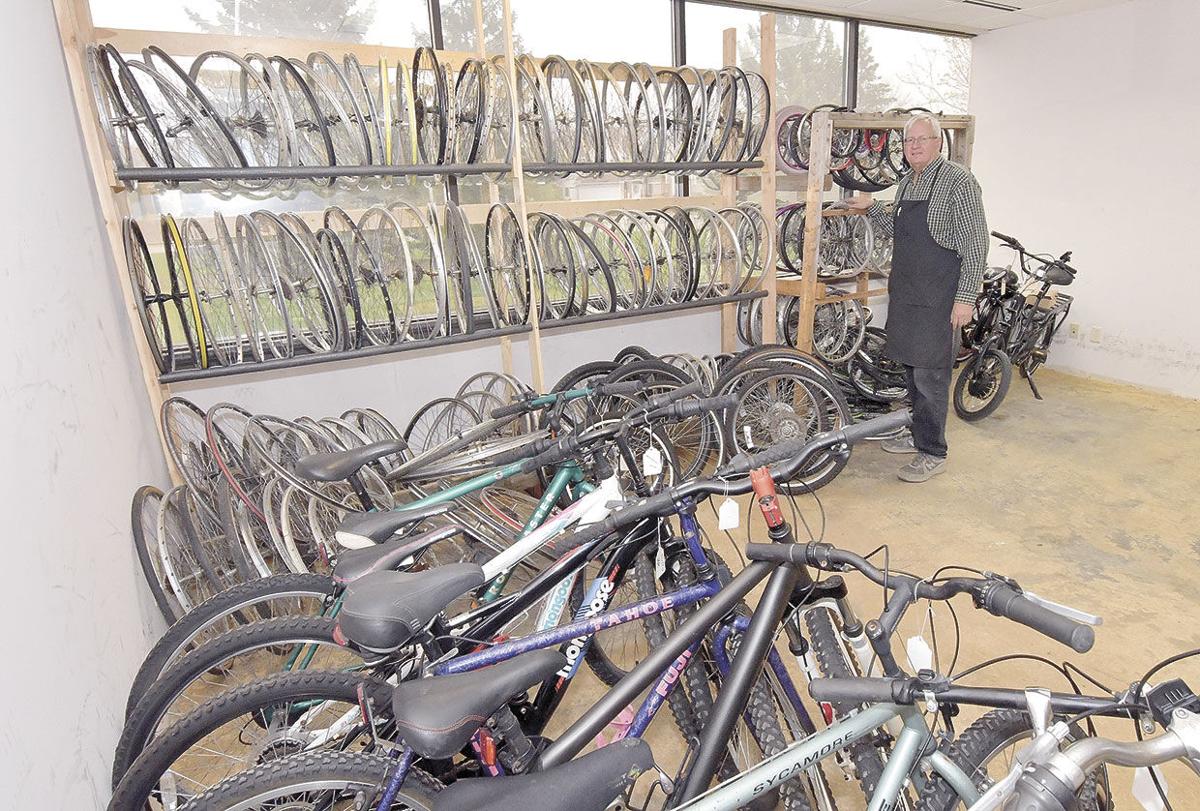 Lynn Kapaun poses with an array of bike parts that have been stockpiled to help in the refurbishment process.

Volunteers Tim Faacks, Lynn Kapaun and Dale Daul in the workshop where they repair hundreds of donated bikes.

Volunteer Tim Faacks takes a bike he has just repaired on a test spin in the workshop.

Lynn Kapaun and Dale Daul work on a couple of the hundreds of donated bikes currently in their workshop.

Lynn Kapaun poses with an array of bike parts that have been stockpiled to help in the refurbishment process.

Have an old bike just sitting in your garage collecting dust? Consider donating it to MNRecyclery, a bike repair shop that refurbishes old bikes and donates them to organizations throughout the area.

The shop is run by 11 volunteers led by Vadnais Heights resident Lynn Kapaun. Group members share a love of tinkering with bikes and refurbishing them to working condition.

MNRecyclery was founded by Jim Muellner of White Bear Lake.

“Jim was doing it out of his garage, and he owned the bike shop, Just Two Bikes, in White Bear Lake. He just started dabbling into fixing bikes up for kids,” Kapaun said.

After reading an article in The White Bear Press about the bikes, Kapaun decided to volunteer. Two days later, Muellner handed him the keys and said, “You’re in charge now.”

Volunteers spend five days a week working on the bikes. Kapaun said they sometimes cannibalize some of the old beat-up bikes for parts. Currently, he is having a hard time getting parts for the bikes and is having parts shipped in from all over the country.

After 10 years, the operation has grown with volunteers and donations.

“Last year we did 696 bikes, which is our biggest year ever,” Kapaun said. “The year before we were at 450 bikes, and we thought that was a big year. It’s really grown this past year.”

“To get bikes from us, it has to go through an organization. Sometimes, they come through social workers or they are referred to us through churches. Basically, (recipients) pay nothing and bikes get donated from the White Bear area,” Kapaun said.

“The Victims of Torture Center is a place where people who have been tortured by their government come in with basically just the clothes on their back, and it’s a highlight of the places we send bikes to. We’re really proud of that.”

The repair shop also sells bikes that are in good shape. Kapaun said the profits generate income to help pay bills. He said he usually puts those bikes on Craigslist.

The operation has branched out to rural areas in Minnesota. Last year, the shop sent 25 bikes to a drug rehabilitation center in Cloquet. For approximately seven years, Kapaun brought bikes up to a thrift store in Ashby, Minnesota.

Kapaun recalled his most memorable moment during his 10 years at MNRecyclery when he delivered bikes to a family of Russian immigrants in White Bear Lake.

“None of them spoke English except for the grandma, who could say ‘hello,’ and that was about it. We took four bicycles there for four boys between the ages of 8 to 16 or so. When we pulled up and the boys saw the bikes, the grin on their faces was unbelievable. Now they could ride their bikes and expand their horizons,” Kapaun said. “We still get thank you cards, text messages, letters and photos where the kids have a big grin on their face.”

If you have a bike to donate, it can be dropped off at Muellner’s rental property at 2100 Fourth St. in White Bear Lake. Leave the bike on the bike rack behind the house near the garage. Kapaun asks that bikes not be left in the front yard.