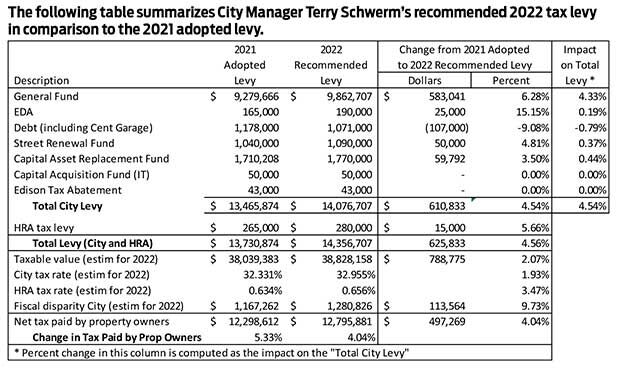 The progress at the destination playground at Shoreview Commons.

The progress at the destination playground at Shoreview Commons.

Finance Director Fred Espe recommended that the Shoreview City Council establish a preliminary city tax levy of approximately $14.1 million and a preliminary Housing and Redevelopment Authority (HRA) tax levy of $280,000. The public hearing date on the budget will be held at 7 p.m. Monday, Dec. 6, 2021.

The city of Shoreview is required to certify a preliminary tax levy and public hearing date for the city and HRA to the county auditor by Sept. 30, announce the date and time for the budget hearing during the council meeting when the preliminary levy is adopted, hold a public budget hearing at a regularly scheduled council meeting between Nov. 25 and Dec. 28, and certify a final tax levy to the county by Dec. 28.

“By contracting out to the Lake Johanna Fire Department and the Ramsey County Sheriff's Department, we still are saving money,” Council Member Sue Denkinger said during the Sept. 7 council meeting. “It would be more expensive as a city if we had our own fire and police departments.”

Mayor Sandy Martin noted that the contract increases for the fire department and sheriff's office account for more than half of the levy increase.

“I just want to remind the public that this is a not-to-exceed levy amount, and that there is still an opportunity for reductions based on additional information that we may get between now and Dec. 6, but we are required to establish this maximum levy,” Martin said. “We have all as a council looked at this and looked at all the reasons for the increase and we will do so with much more clarity and detail Dec. 6. So, tonight we are just being asked to establish this maximum levy and establish a date.”

• A public hearing was held at the council meeting for an application for an intoxicating liquor on-sale license and an intoxicating liquor Sunday sale license for Churchill Street restaurant. No one from the public spoke at the hearing. Council Member Terry Quigley asked when the restaurant is planning on opening. Churchill Street owner Carly Gatzlaff approached the council and said they are planning on opening late October due to construction issues. “We just can’t wait. We’ve been busting at the seams for a long time and feel like the city is, too,” Gatzlaff said. The council unanimously approved the liquor license.

• A public hearing was held on the resolution ordering the improvements for the Lexington Avenue reconstruction. According to City Engineer Tom Wesolowski, the proposed improvements include:

• Reconstruction of the pavement and curb and gutter with four through lanes, continuous median, and dedicated turn lanes and improved geometrics at all signalized intersections.

• Widening of trail on east side and installation of sidewalk on the west side.

According to Wesolowski, Ramsey County is providing the majority of the funding for the project. The cities of Shoreview and Arden Hills will provide a cost share for improvements related to traffic signal work, replacement of the water and sanitary sewer infrastructure, and stormwater improvements in accordance with Ramsey County's cost-share policy.

Shoreview's estimated total cost share for the upgrades to the existing traffic signals and installation of the new signal totals $340,000, and the estimated cost for the replacement of the water and sewer is $686,000, for a total cost of $1,026,000. The council unanimously approved the resolution. Martin said, “We look forward to the improvements, but not the construction.”

• Council Member Sue Denkinger commented on the progress of the destination playground construction at Shoreview Commons. “It’s so fun to watch that. The difference between last week and this week is amazing. I’m so excited, and I’m sure the kids and the community are as well,” she said. She also announced that the Friendship Garden sculpture is due to be delivered; an event is planned at 7 p.m. Sept. 22 to commemorate the garden.

The next Shoreview City Council meeting is at 7 p.m. Monday, Sept. 20, in the council chambers at City Hall, 4600 Victoria Street North in Shoreview.