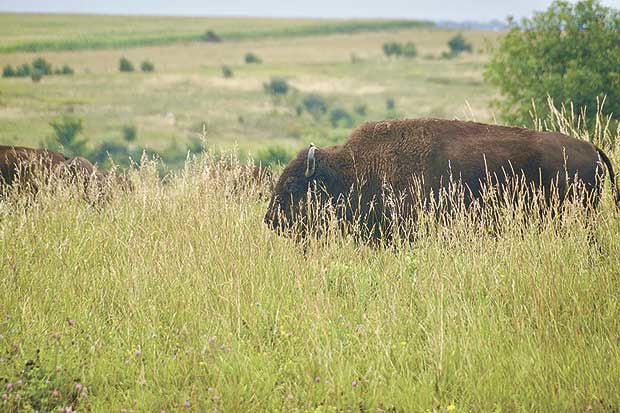 A bison enjoys the native prairie in Blue Mounds State Park while people in the Prairie and Bison Tour vehicle quietly observe. 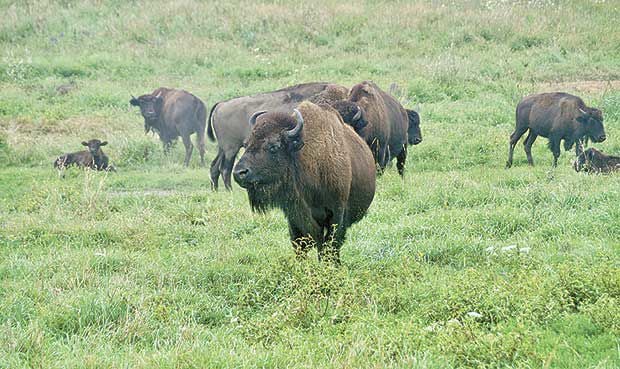 The bison at Blue Mounds State Park are among the 1 percent of all half-million bison in the U.S. today that are pure-blooded, meaning they do not have cattle introgression.

A bison enjoys the native prairie in Blue Mounds State Park while people in the Prairie and Bison Tour vehicle quietly observe.

The bison at Blue Mounds State Park are among the 1 percent of all half-million bison in the U.S. today that are pure-blooded, meaning they do not have cattle introgression.

During the 1800s, the American plains bison was almost wiped from the face of the U.S. Settlers nearly extinguished the animal in an attempt to conquer lands and for their hides and meat. Their numbers dropped from tens of millions to hundreds.

Today, due to conservation efforts and bison ranching, there are about half a million. However, there are only a mere 1 percent, or 5,500, that have no cattle introgression, said Amber Brooks, Prairie and Bison Tour guide at Blue Mounds State Park in the southwest corner of Minnesota. The herd of 100 at the park are among that 1 percent, she proudly noted while giving a tour in the park’s prairie vehicle.

So the bison you see out here look just like the ones that roamed the prairies in the 1800s, she told the group. Many of the bison that roam elsewhere have cattle introgression, although the common observer may not notice the difference. When ranchers began to breed bison with cattle, they discovered the offspring looked more like a bison than cattle. Eventually, the beefalo was formed, which looks like a cross between both, much like a mule from a donkey and horse. (Note: buffalo is a colloquial term for bison but they are not related to buffalo native to Africa and Asia).

The herd is part of the Minnesota Bison Conservation Herd, which includes bison at Minneopa State Park and the Minnesota Zoo, according to the Minnesota Department of Natural Resources. The partnership hopes to grow the pure bison herd size to 500 across the state; its total is about 130. At Blue Mounds State Park, about 80 adult females give birth to 20 to 30 calves each year. In the fall, the bison are rounded up; some are sold because there isn’t enough prairie at the park for more than 100 bison. Males cannot be kept at the park beyond a certain age. Only one bull can be in the herd. A new bull from a national park or refuge is selected every few years to increase genetic diversity.

Blue Mounds State Park has had bison since the 1960s. The nearby city of Luverne wanted to return bison to the prairies, Brooks noted. “They petitioned the state to put bison in the park,” she said. “Over time the herd has grown as more land has been acquired.”

The Prairie and Bison Tour is new to the park. It began last summer. This year, it grew in popularity and tours have been extended through the fall, including MEA weekend. The propane-fueled tour vehicle was funded by the Legislative-Citizen Commission on Minnesota Resources Environment and Natural Resources Trust Fund. Brooks’ position was funded by the Minnesota Clean Water, Land and Legacy Amendment, which Minnesota voters approved in 2008 to preserve Minnesota’s resources.

When Brooks, a Twin Cities native, heard about the position, she was working as a naturalist and interpreter for the U.S. Fish and Wildlife Service in Utah. Brooks had studied bison in university, so she jumped at the position. Her capstone project for her wildlife biology major focused on bison matriarchal studies.

Brooks has an unexplainable passion for bison that is as unique as the herd. She was studying journalism at university when she took a vacation to Yellowstone and saw a bison for the first time in her life. “I can’t explain, and I don’t know, but there was just this moment,” she remembered. It felt like a jolt of electricity hit her and she realized she needed to do something for bison with her life. She switched her major to study bison.

“I find them to be the most fascinating, amazing creatures in the world,” she said.

Her fascination with the living bison doesn’t prevent her from enjoying the meat, she added. Eating bison is a much more sustainable option than beef. Bison have a way with the land and don’t overgraze. It’s also leaner meat. Her go-to place for bison meat is Target.

For more information on the bison and tours, visit dnr.state.mn.us/bluemounds.

What: 1.5-hour tour through the prairie in a propane-fueled vehicle; up-close observation of bison is possible but not guaranteed.

Where: North from Interstate 90: The park office is 5.5 miles north from exit 12. South from Pipestone, Minnesota: 21 miles south on Highway 75. GPS directions to the park are unreliable and may lead you to the incorrect entrance for tour check-in. Check-in for tours is located at the park office on 161st/County Road 20. Tours are inaccessible from the interpretive center or climbing parking lots.

Reservations: Recommended at reservemn.usedirect.com/MinnesotaWeb/ or call 866-857-2757.