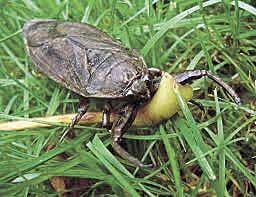 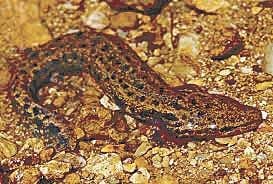 Mudpuppy: The lowly mudpuppy’s looks may keep some people out of the water, but they are a benign, valuable member of aquatic ecosystems.

Mudpuppy: The lowly mudpuppy’s looks may keep some people out of the water, but they are a benign, valuable member of aquatic ecosystems.

When they wade in, most swimmers don’t give a thought to what is lurking just out of sight. Some may fear getting bit by big fish or turtles, but such occurrences are rare. The truth is, most creatures that inspire fear or disgust are completely benign, and those that pose actual threats to life or safety are usually downright invisible.

One well-known nuisance is the group of parasites that cause swimmer’s itch. Their life cycles involve several stages of development, including a host such as ducks or geese, as well as a gastropod (snail) host. We humans are affected when the waterborne parasite leaves the snail and embeds itself in our skin, causing an itchy rash that can last for weeks. Lakes in our area with reported outbreaks of swimmer’s itch in 2021 have included Johanna and White Bear.

When it comes to actual “biting,” the giant water bug, a.k.a. “toe biter,” is known for inflicting a painful sting. Regarded as efficient and voracious predators, giant water bugs prey on invertebrates in shallow water. They catch and hold their prey with their front legs—which resemble pincers but are not—then inject a toxin to kill. They grow to 2 or more inches in length and are fast swimmers. They are also known to leave lakes and fly toward artificial lights. Anyone of a mind to handle these bugs is advised to exercise extreme caution.

At just one cell, the brain-eating amoeba Naegleria fowleri is the smallest but deadliest on this list. It lives in freshwater lakes—especially warm ones. It is introduced into the body when infected water enters through the nose, and is fatal in an overwhelming majority of cases. Fortunately, the overall number of infections is low: 34 cases in the U.S. between 2010

Long thought of as a problem of the southern U.S., N. fowleri has claimed victims in Minnesota in recent years. In fact, two children died after contracting the amoeba from the same lake—Lily Lake in Stillwater—in 2010 and 2012.

Another creature that may be encountered in our lakes is one of many kinds of horsehair worms. They live in freshwater environments and grow to over a foot in length. Worms begin life very small and wait to be ingested by an invertebrate host. Inside that host (upon which they feed), they develop until they reach adult status. They then exit the host, killing it, and reenter the water.

Horsehair worms may be observed in knotlike balls, which inspires their nickname, “Gordian worm,” after the mythical Gordian knot. Though they may be mistaken for intestinal worms, they cannot infect humans, pets or livestock.

No doubt many have been traumatized by photos of sea lampreys, which have horrific-looking mouthparts and occasionally latch onto humans. The good news is that they aren’t native to Minnesota and are confined to Lake Superior and its tributaries. You may, however, eventually come face to face with one of Minnesota’s five lampreys, which are, in fact, native.

Our native lampreys live in rivers, streams and their connected lakes. The St. Croix River is home to four of the five. Unlike sea lampreys, only two of the five species are parasitic, and don’t have much impact on fish populations.

The mudpuppy, resembling something coughed up by the netherworld, is found in rivers and lakes of Minnesota but is seldom seen. They typically sport a dark skin with darker spots, red external gills, a paddle-like tail, and can grow to over a foot in length. Those who handle them will find them covered in an abundance of slime. Some believe mudpuppies to be poisonous or venomous, though they are not.

The mudpuppy (Necturus maculosus) is a species of special concern in Minnesota. It is the only known larval host for the state-endangered salamander mussel, and therefore a critical link in its survival. DNR Nongame Research Biologist Krista Larson, who has been involved in studying Minnesota’s population, describes mudpuppies as “sensitive to changes in water quality.”

Relatively little has been known about this typically nocturnal member of the salamander family, so a statewide survey began in 2010 to determine their status. Larson says that in general they are “difficult to find” due to their habits, but the study helped establish a known baseline for the overall health of the population. She reports that locally, mudpuppies are doing “really well in the St. Croix watershed,” as well as in the Minnesota River.

Though the study concluded, the Minnesota Biological Survey is interested in reports of mudpuppy sightings—especially from places other than the St. Croix. Encounters may be reported via email to mcbs.e-report@state.mn.us.

Roy Heilman is a contributing writer for Press Publications. He can be reached at news@presspubs.com or 651-407-1200.