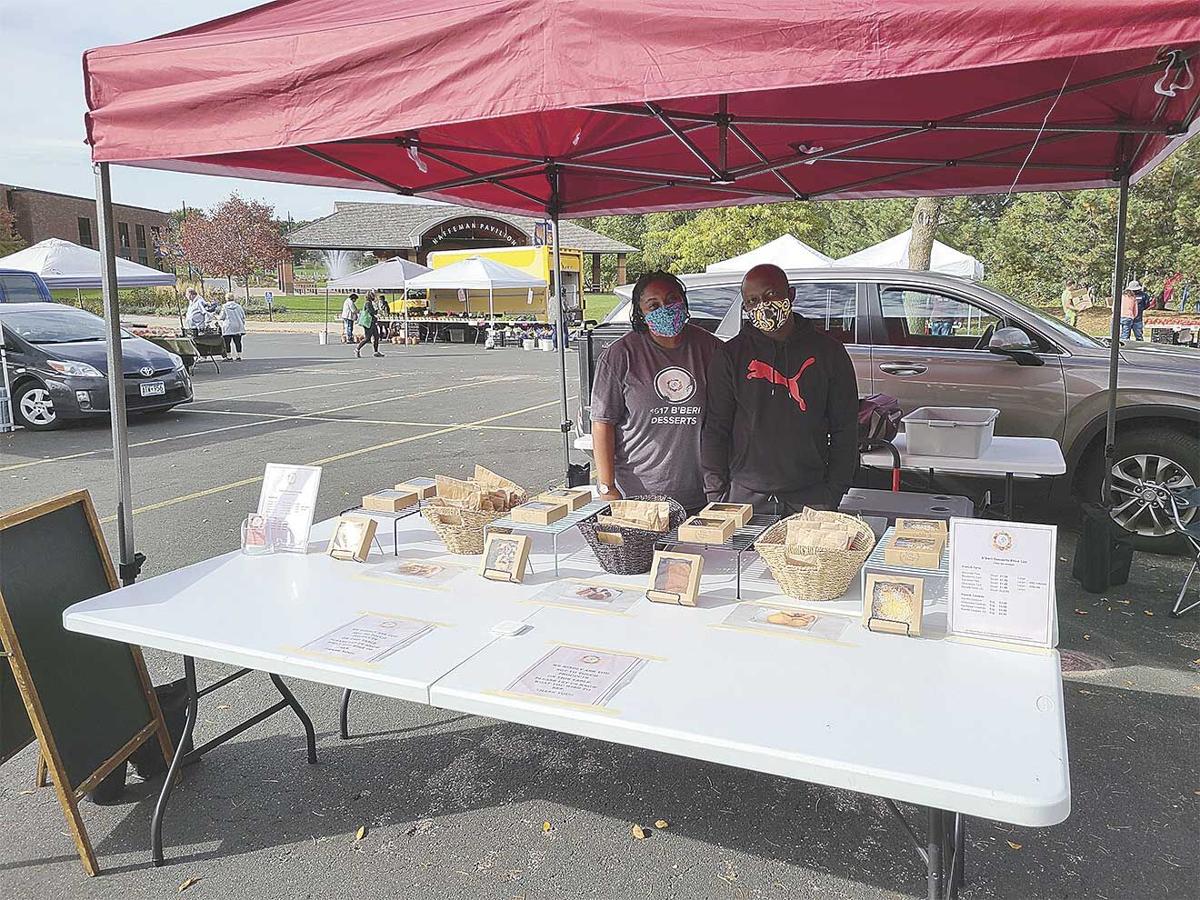 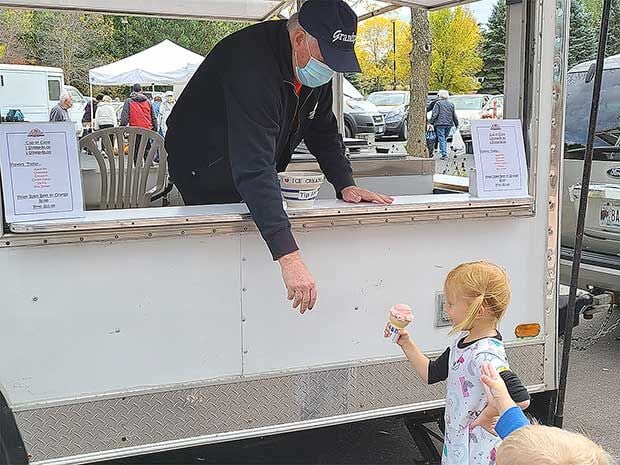 “Mick,” Grandpa’s Homemade Premium Ice Cream owner, gives a cone to Adalie Jose, who stopped with her family at his ice cream trailer at the Shoreview Farmers Market last Tuesday. Simmons said there has been a 50% decrease in the number of children coming to his stand this year, likely due to COVID-19.

“Mick,” Grandpa’s Homemade Premium Ice Cream owner, gives a cone to Adalie Jose, who stopped with her family at his ice cream trailer at the Shoreview Farmers Market last Tuesday. Simmons said there has been a 50% decrease in the number of children coming to his stand this year, likely due to COVID-19.

Michael “Mick” Simmons peers out of his ice cream trailer window at three children on an overcast Tuesday afternoon at the Shoreview Farmers’ Market.

The 73-year-old owner of Grandpa’s Ice Cream has served homemade scoops at the market for five years. His company started 16 years ago when he and his wife traveled to Italy and were inspired by the gelato. Four storm-damaged tents and one trailer later, Grandpa’s Ice Cream has become part of the market’s character. However, this year’s market looks far different than years prior. Half the vendors. Half the kids. Half the profit.

“Without kids, we don’t get very many people stopping for ice cream,” said Simmons, who explained that the financial consequences of COVID-19 have been more frightening for him than the virus itself. According to Shoreview Recreation Program Supervisor Stephanie Schutta, fewer parents have been bringing their children to the market.

“We used to do free kids’ activities at the market during a normal season. We’ve had to cut that,” she said.

Prior to the virus, local bands, entertainment and activities were offered. Despite the downturn in family attendance this year, however, locals have turned to the farmers’

market as a way to get out of the house every Tuesday, which has led to an increase over last year’s turnouts.

Gene Johnson, 81 (no relation to Publisher Emeritus Gene Johnson), met Simmons after hopping off his Harley Davidson and buying a root beer float from Grandpa’s Ice Cream. Five years later, Simmons does the scooping and Johnson handles the change. Johnson said they have fun, smiling from behind his mask.

“We do have regulars that come all the time,” Johnson said.

When they are gone, loyal customers worry, he said. Farmers’ markets were deemed essential during the pandemic. The Shoreview Farmers’ Market, which opens annually in June and runs from 3 p.m. to 6 p.m. every Tuesday at the Shoreview Community Center’s lower parking lot, has made it possible for some vendors to get the profit they need to survive.

Few people know this better than Fritz and Diane Ebanda, a couple who started their business in February 2020. Only a short walk down from Simmons, their stand is decorated with French-inspired baked goods, creations of Fritz, a pastry chef. The farmers’ market has given their home-based business, B’beri Desserts, a platform for their products.

“We were thinking because of COVID people would not come, but I think that people have been starting to catch the essence of shopping local,” Diane said.

Diane said she and her husband give God all the glory for helping them start a business during a pandemic.

“We use our Christian values,” she said. “It’s important for us to use what God gave us.”

While customers milled around, enjoying the vibrant colors of fresh produce and attractive displays, Diane expressed her gratitude for how the past eight months have gone for her and her husband.

“We are brand new and we started right at the brink of COVID,” she said. “So, it could have been a make or break, but it happened for us. And I think people understand that it’s important to support businesses like ours.”