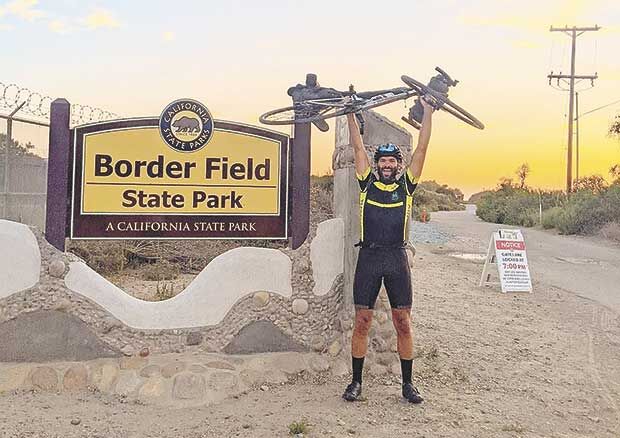 Austin Dircks hoists his bike over his head after he reached his destination at the Mexican border all the way from the Canadian border. 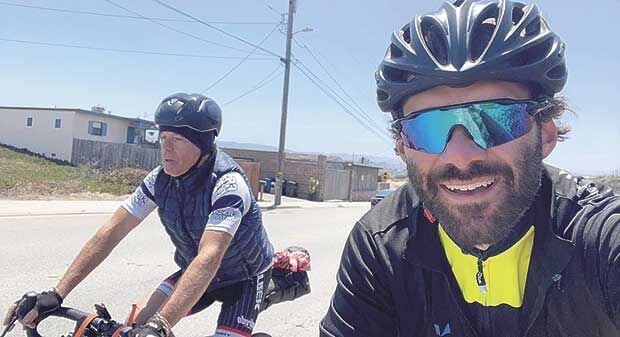 Austin Dircks riding with Troy, the man who lost his phone. 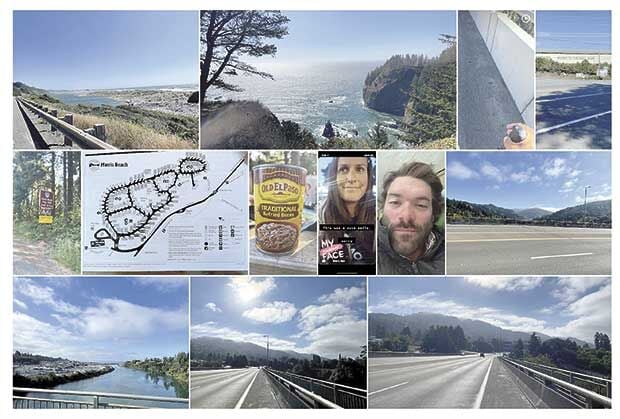 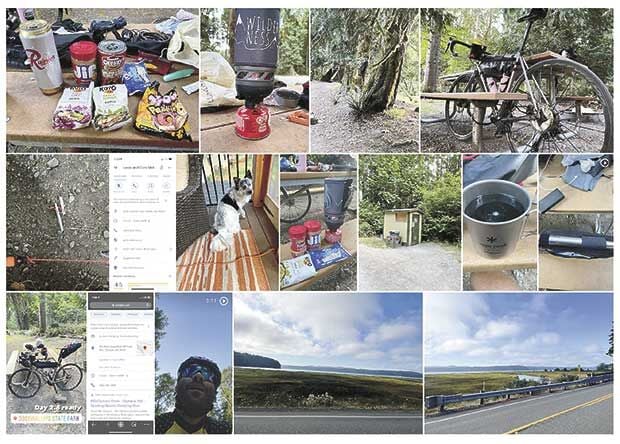 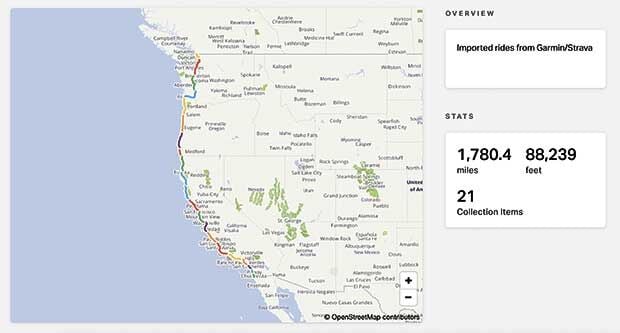 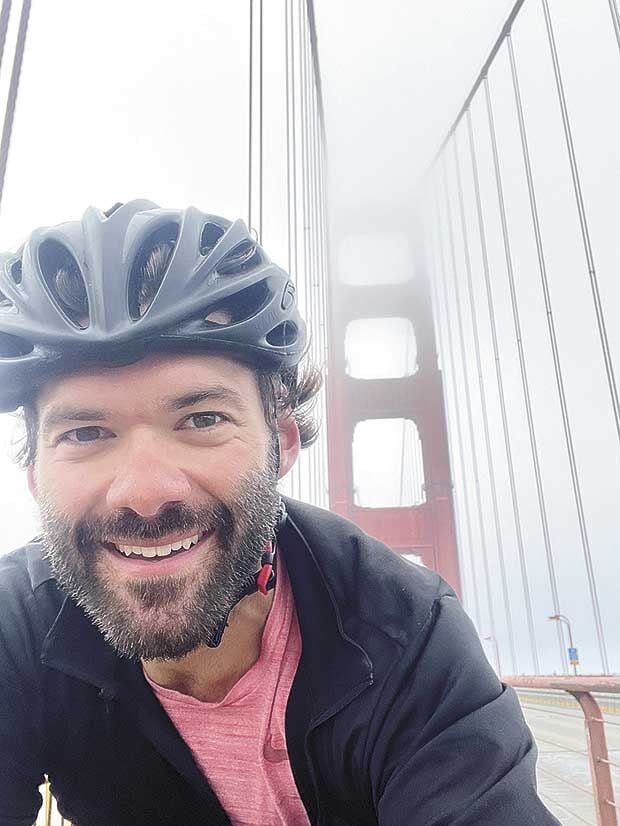 Dircks described riding over the Golden Gate bridge as the windiest experience of his life. 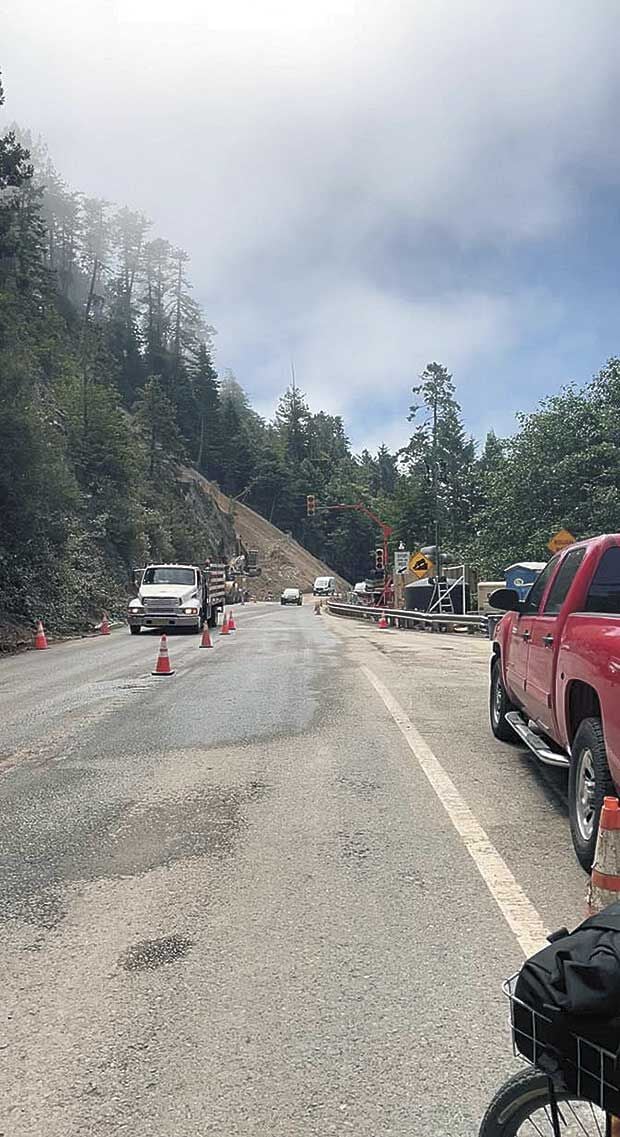 Dircks was able to pedal around a traffic jam created by a rock slide along the coastal route.

Austin Dircks hoists his bike over his head after he reached his destination at the Mexican border all the way from the Canadian border.

Austin Dircks riding with Troy, the man who lost his phone.

Dircks described riding over the Golden Gate bridge as the windiest experience of his life.

Dircks was able to pedal around a traffic jam created by a rock slide along the coastal route.

Austin Dircks has loved biking since he was a kid. This summer, he turned his dream of biking across the country into reality.

Reaching top speeds of 41 mph, 27 year old Dircks, of Shoreview, biked 94 miles a day for 19 days on a solo trip through the states of Washington, Oregon and California.

“I have watched the Tour de France since I was 7 or 8, and I learned about long-distance bike riding. I found this specific route from Canada to Mexico along the Pacific coast many years ago. As I got in more shape over the years, I thought, ‘I could do this,’” Dircks said. “I set my schedule to do it last summer, but with COVID and nothing open, I delayed it for this summer, and it worked out perfectly.”

He started his trek in Blaine, Washington at the Canadian border on his titanium Lite Speed bike. He rode south through the states of Washington, Oregon and California and ended up in Tijuana at the Mexican border.

“I wanted to go solo because I didn’t want anyone to wait for me or for me to wait for anyone else,” he said.

Throughout the trip, Dircks camped or stayed at hotels. He also found places to stay by couch surfing on an app called Warm Showers.

“People offer up floor space, couch space, a place in their yard to throw a tent, or whatever they are able to provide anybody. They specifically host bicyclists coming through their town,” Dircks said. “It was really cool, and I got to meet some really interesting people.”

Somewhere around the Monterey area at Carmel-by-the-Sea, Dircks met up with another biker who said he had lost his phone along the trail a couple of miles back. Sure enough, while putting his phone back in his pocket after a quick call, Dircks looked down and saw the other biker’s lost phone. “What are the odds?” Dircks said. He was ahead of schedule, so he rode back and found the biker and gave him back his phone.

During the trip, Dircks encountered a road with a very narrow shoulder over a 50-mile stretch. It took  him six hours to complete the distance due to the two-lane road, traffic, cracks in the road, and simply quite dangerous. “It was intense, and the worst 50 miles of the trip and my entire life,” he said.

He didn’t encounter any severe weather during the trip. Temperatures ranged between 55 and 75 degrees. He noted that he only had three flat tires when it was raining. “I had maybe an hour of rain during the entire trip, and a tailwind largely the entire way,” he said.

The hardest ride of the trip (and his life) was from Anchor Bay to San Francisco.

“It was nearly 127 miles and 10,000 feet of climbing,” Dircks said. “It was cool because I went through Sonoma Valley and wine country on the way there and it was really pretty, but the whole time I was thinking, ‘I can’t do this anymore,’” he laughed.

Dircks explained that there were two trains of thought throughout the trip — pre-San Francisco and post-San Francisco.

“I was trying to get to San Francisco as fast as I could to spend as much time with a college buddy I don’t see much anymore, and after I left San Francisco, it became a grind to get to San Diego because there were so many hills that it would get demoralizing at times,” he said.

Dircks describes riding over the Golden Gate bridge as the windiest experience of his life. “I could put my entire body weight into my right side and the wind was holding me up,” he said.

At one point during his trip Dircks found he had lost 17 pounds.

“I could not eat food fast enough, and one day I ate four cheeseburgers. I basically ate my way through San Francisco,” he laughed. “I would stop at a local brewery at the end of each day and have a beer or two throughout the trip.”

His girlfriend, Kandice O’Grady, met him at the border in San Diego.

Overall, Dircks said he biked approximately six to 10 hours each day and climbed around 89,000 feet of hilly terrain. When he finished the trip, the first thought that came into his mind was, “What’s next?”

“It would be fun to do something west to east like San Diego to Portland, Maine,” he said.

Dircks graduated from Mounds View High School in 2012 and recalled that while he was on the track team, his coach, Ross Fleming, told him he was a not a long-distance athlete but a sprinter.

“When he recruited me for the track team, I had mentioned running the 800 or attempting the mile because I thought I’d be good at it, and he said, ‘No, you’re a sprinter and you’ll always be a sprinter,’” Dircks laughed.

His favorite part of the trip was learning how to actually camp. “There’s something to be said for carrying everything you need to survive for three weeks,” he said.

Dircks said the scenery was beautiful throughout the entire trip, including a spectacular sunset in San Diego. He noted that the hard parts of the trip are the most memorable.

“To sum up the trip to one thing, it would be how simple it was for three weeks in terms of an existence,” Dircks said. “I just wanted to get away from real life and just ride. It was a childlike sense of freedom.”