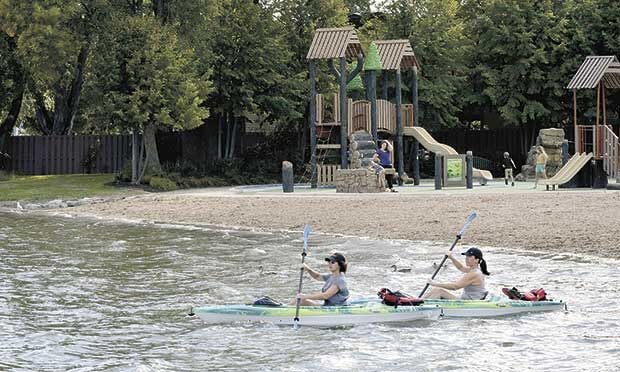 Two kayakers launch from Lakeside Beach in Forest Lake for some quality time out on Forest Lake. 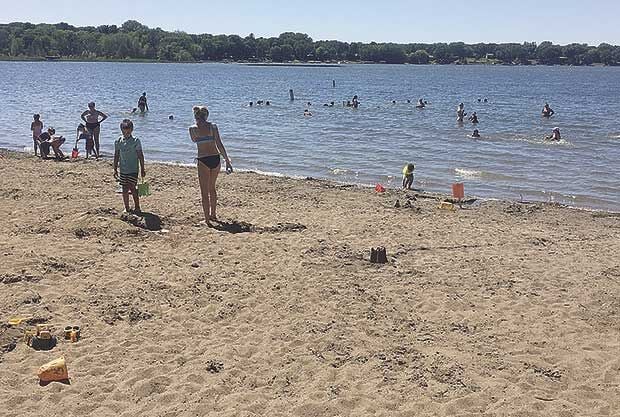 Two kayakers launch from Lakeside Beach in Forest Lake for some quality time out on Forest Lake.

If June has been any indication, the summer of 2021 will cause many in the area to seek swimming beaches as an alternative to air conditioning. When they do, they will find plenty of choices.

Ramsey County currently has nine swimming beaches on the roster (fluctuating water levels can shutter some occasionally). In a typical year, five of those nine are staffed with lifeguards. According to Kristopher Lencowski, director of park operations, there were an estimated 48,000 visitors in 2018 to those beaches, with “similar numbers” in 2019. Due to COVID-19, there were no lifeguards (and no counts) in 2020.

In 2021, Lake McCarrons County Park has the only Ramsey County beach with a lifeguard presence. Lencowski attributes this mainly to the uncertainty around COVID-19 circumstances at the time of planning, as well as difficulty in recruiting lifeguards. McCarrons was selected as the sole guarded site because it receives high use — approximately 15,000 visitors in 2018 — as well as the fact that it serves a diverse population. The beach was closed because of high levels of E. coli detected there in early June but reopened on June 16. It will be staffed with lifeguards from noon to 8 p.m. every day until August 15.

White Bear Lake County Park typically sees about one-third as many visitors as McCarrons in a year, but Lencowski points out that an extended area of shallow water is a nice feature there. He also reports that despite notoriously low water levels in White Bear Lake in recent years, the sand beach has seen a marked reduction this year because of high water. In addition, he advises swimmers to rinse off and towel dry promptly because swimmer’s itch has been reported there recently.

In Washington County, large, sandy beaches await beachgoers at Big Marine Lake and Square Lake parks. Square Lake County Park hosted an estimated 140,000 visitors compared to Big Marine’s 105,000 in 2020. This may be in part because of the nature of Square Lake itself. Guest Services Supervisor J.J. Williams explains, “The beach is a bigger draw at Square Lake, mainly because of the water quality.” The water is famously clear and popular with divers, and the park has been labeled a “special recreational feature” by the Metropolitan Council.

Williams says that both Square Lake and Big Marine Lake have been staffed with lifeguards in the past, but echoes Lencowski in the difficulties presented by circumstances in 2021. This year, the Lake Elmo Swim Pond will be the only guarded facility in the Washington County park system, from noon to 8 p.m. Thursday-Monday. To enter Washington County parks, a $7/day visitor pass is required; free admission is available on select Tuesdays.

There is a large and popular beach facility on the west shore of Centerville Lake, part of the Rice Creek Chain of Lakes Park Reserve. It is close to both the picnic area and campground, and adjacent to a trail system that circumscribes the lake. There will not be a lifeguard on duty this season. $6/day vehicle pass required.

In addition to the larger county parks, a few cities maintain beaches, some of which could be described as well-kept secrets.

Those in the Circle Pines area have a gem of a beach tucked away at Golden Lake Park. Though on the smaller side, this swimming area has a restroom building, ample shade just off the beach, and a concession stand open every day from 11 a.m. to 8 p.m.

Visitors to Lakeside Beach in Forest Lake will find a beach with plenty of sun and sand. It may not be staffed with lifeguards, but it does have restrooms, changing areas and exterior showers. Parks and Recreation Coordinator Jamie Muscha is quick to mention the adjacent playground, which is popular with beachgoers.

Mahtomedi Beach, on the southeast shore of White Bear Lake, has restrooms, exterior showers, a sandy beach and extended sand play area. There will be lifeguards on duty every day from noon to 8 p.m. through August 21.

With a hot start to summer and lifeguards on duty at only a minority of beaches in the area, swimmer safety is a concern. Visitors are advised to be familiar with and observe park rules.

Among other things, those rules in Washington, Anoka and Ramsey county parks disallow use of pool noodles, inflatables or other similar items. Lencowski explains that such swimming aids pose danger to swimmers because they obscure views into the water and give a false sense of safety. “We highly recommend people use Coast Guard-approved life jackets.”

He is also quick to warn anyone in a supervisory role not to let phones, books and other distractions take their attention off swimmers.