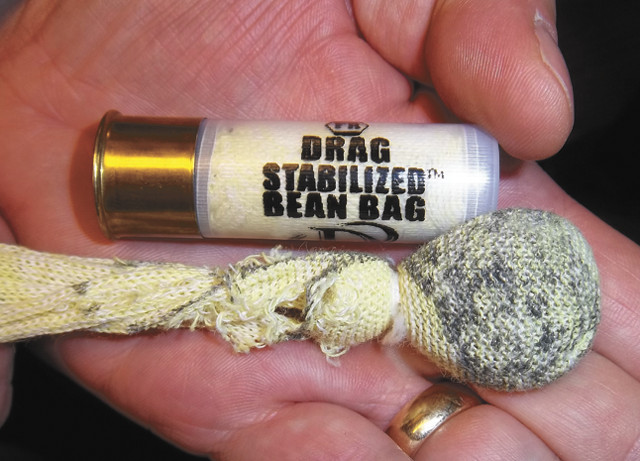 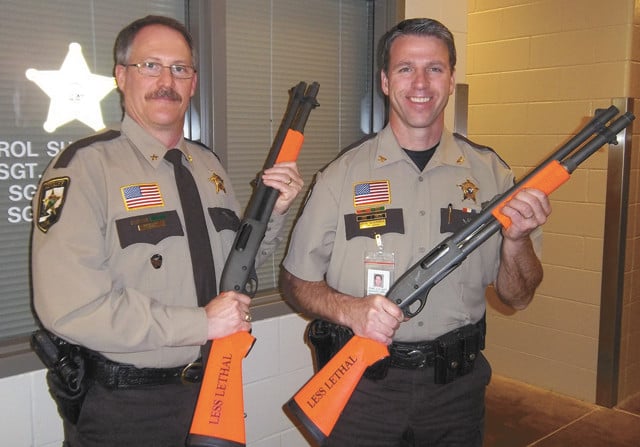 The shotguns shoot bean bags that are designed to be accurate out to 75 yards and consist of a Kevlar sock filled with a powder material. As the bean bag flies through the air, short cloth tails drag behind it making it very accurate. The blow that the bean bag delivers on impact is similar to being struck by a night stick and is designed to stun the intended target.

The Pine County Sheriff’s Office received 24 Remington shotguns from the Minneapolis Police Department. They were donated with the express understanding that the weapons be used as less than lethal guns.

Pine County Sheriff Robin Cole told the Pine County Board at its June 7 meeting that the guns are valued at $400 each for a total $9,600 donation. There was a $40 per gun cost for supplies to replace the wooden stock with orange stocks, so they will not be confused with the regular 12 gauge shotguns that are also carried in each deputy sheriff’s vehicle. The Sheriff’s Office worked with the Pine Technical College gunsmithing program, whose students converted the shot guns to their new role free of charge.

From zero to eight feet, officers can use pepper spray to disarm someone; electronic tasers work up to 21 feet. Until now, the sheriff’s office had nothing for a greater distance. If the officers are too close to a person with a knife or other weapon, they can be in danger. “This way we are able to keep our distance and produce a powerful strike,” Cole said.

The SWAT team has been trained in the use of these nonlethal guns, and they are very receptive to using them, according to Cole. Commissioner Doug Carlson asked if Cole was totally confident that mentally his deputies were able to determine when to use deadly force.

“We have a very stringent training program and the deputies must have yearly training,” Cole responded. “We are in the process of testing now. I am confident in their ability. We always have to have a backup of lethal weapons.”