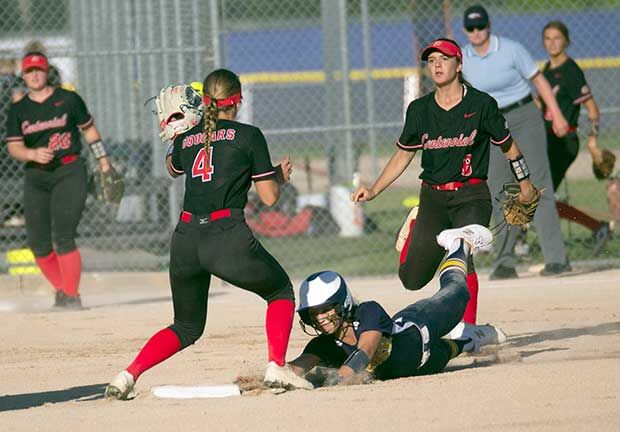 Cougar infielders Alexa Just (6) and Abby Lohse (4) had an Irish baserunner in the hot box, but she dived into second base safely. 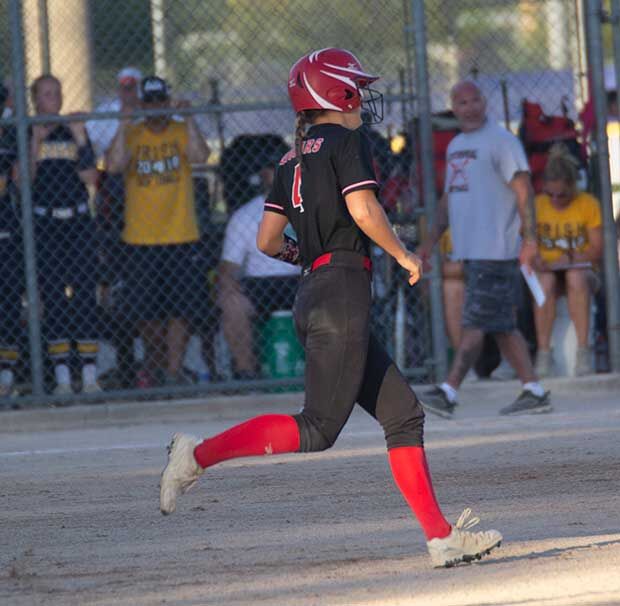 Abby Lohse enjoyed a home-run trot against Rosemount, one of the few highlights during an 8-3 loss. 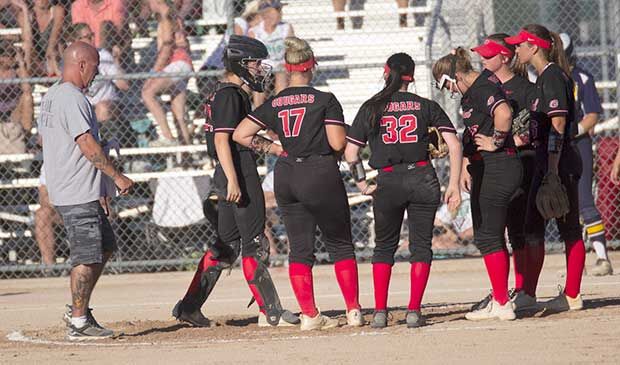 Cougar infielders Alexa Just (6) and Abby Lohse (4) had an Irish baserunner in the hot box, but she dived into second base safely.

Abby Lohse enjoyed a home-run trot against Rosemount, one of the few highlights during an 8-3 loss.

As Helene Krage went, so went the Centennial Cougars, in the first two rounds of the state softball tournament on Tuesday.

The junior right-hander’s pitching gem and walk-off homer beat Hopkins 5-3 in the opening round, but her early struggles in the semifinals led to an 8-3 loss to Rosemount.

The Cougars (22-2) face Chanhassen (22-3) in the third-place game Wednesday at 10 a.m. Rosemount will duel Forest Lake for the championship at noon or a little after.

Krage slammed a two-run homer in the last of the seventh, breaking a 3-3 tie, against Hopkins (20-5). She pitched the distance, allowing six hits and two walks, striking out 11.

Ella Fidler had two RBI’s — on a double, and a hit-by-pitch with bases loaded — and Syd Chiappetta punched an RBI single.

The Cougars had just four hits off Hopkins’ Signe Fohse, but she walked seven and hit four others. Tory Turgeon had two hits and two RBI’s for Hopkins.

Krege entered the semifinals against Rosemount with a 13-1 record and ERA around 1.20 but had her first bad outing of the season with the Irish taking a quick 5-0 lead.

Krage retired just two of ten batters she faced — the other out in the first was a pickoff by catcher Bryn Ruberg — while giving up five hits and three walks, and wild-pitched two runs home.

Coach Rick Thomas pulled his ace after Rosemount opened the second with two singles. Maisy Dockendorf came in and walked a batter to load the bases — then got the next three batters out, with a force-out scoring one run.

Dockendorf went on to throw four scoreless innings while the Cougars pulled within 5-3. Rosemount finally got to her in the sixth with a three-run homer by Izzy Yahr after a walk and single.

Abby Lohse got the Cougars on the board with a home run to center field off Emmy Yahr in the fourth.

The Cougars then ripped five straight hits to start the fifth inning — by Adrianna Thomas, Alexa Just, Emma Hopkins, Chiappaetta (double) and Ruberg (RBI single) — but got only two runs out of it, with two runners thrown out on the bases.

The Cougars almost had another homer in the sixth but Irish center fielder Cece Hanson leaned back over the fence to snag Fidler’s long drive.

Emmy Yahr got the win, giving up seven hits and two walks, striking out four. Rosemount leadoff batter Macy Fry had a double, single and walk on four trips, scoring twice. Izzy Yahr was 2-for-3 plus a walk and two runs.