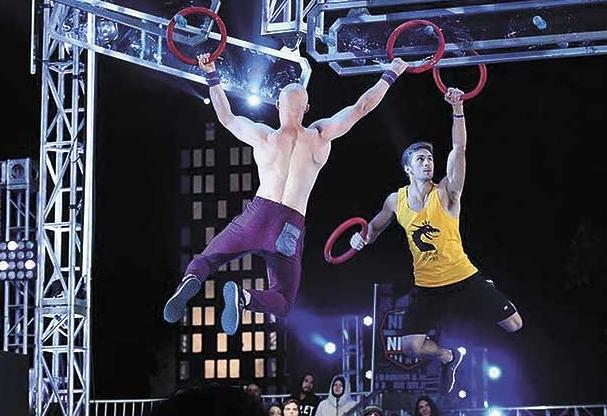 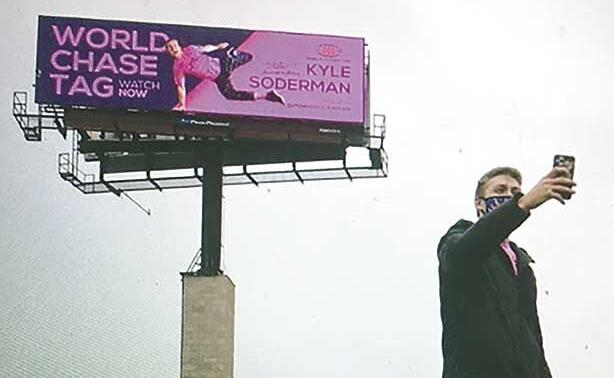 Kyle Soderman snaps a selfie with his billboard promoting his appearance on World Chase Tag.

Kyle Soderman snaps a selfie with his billboard promoting his appearance on World Chase Tag.

Soderman, 26, works as a stunt man in films and music videos, most notably in a Bon Jovi video, in Los Angeles. He’s also an athlete who’s appeared on American Ninja Warrior (NBC) in 2019 and Ultimate Beastmaster (Netflix) in 2017.

“Growing up, I never saw myself as having a nine-to-five job,” Soderman said with a grin.

World Chase Tag is his most recent venture. His six-man team, Hollywood Freerunners, competed in the first episode of the show and will return for the fifth episode Thursday, Dec. 10. You can view a clip of Soderman from the first episode on https://instagram.com/p/CHda6PTD5iS.

The billboard is presented by Kris Lindahl Real Estate, which offers free exposure to local entrepreneurs with the most intriguing presentation. “Soderman did an amazing flip, and one of his incredible stunts will be featured on the billboard,” explained an advance press release from KRLE.

World Chase Tag, owned by a U.K. company, is an intensified version of “the childhood game we all played,” Soderman explained, held in a 40-by-40 arena with various scaffolding for barriers, consisting of 20-second duels where the chaser has to tag the chased to see which team gets the point.

The 2012 graduate of Centennial High School played baseball as a youth but was much more interested in individual action sports than team sports and did not join any school teams in high school.

His parents, Brian and Laurie, have operated Rock Gardens, a landscape supply business, in Lino Lakes for over 30 years. He’s the third of three brothers. Troy, the oldest, works for an aviation company in Salt Lake City and is preparing to be a pilot. Dustin returned to the family business. Soderman has worked for his parents off and on throughout his life and is home now due to the shutdown of the entertainment business.

His main ventures were motocross, snowboarding, paintball tournaments, and BMX, during his high school years and in college at St. Cloud State, where earned a degree in real estate “that I haven’t used yet, except to invest in real estate.”

He’s done well enough in Ninja meets around the country to earn an appearance on the once-a-year, televised nationals, in 2018 and again this year, although this year’s program was called off due to COVID-19. “I was in L.A. the day everything shut down. We were doing interviews on Friday and it was supposed to start Saturday,” he said.

After that, he returned to Rock Gardens. “It’s a blessing to be able to come home to this place, be with my family and make money,” he said.

Soderman got into Hollywood stunts as a natural progression from his action sports.

“They need people who know how to move and how to fall,” he said.

With Rock Gardens closing after the Christmas tree season until April each year, he decided “I might as well go to L.A. and give that a try,” and moved there in January 2018. He’s landed several jobs and got into the union, SAG AFTRA, in October of 2019, meaning he’s eligible for TV and movie work.

His stunt man highlight is a featured role in a Bon Jovi video for the song “Limitless.” Soderman and a stunt actress, Angie Dick, portrayed a couple who escaped from a prison encampment, sprint through L.A. a streets and make a 40-foot fall in tandem.

“That’s my highlight so far. That’s the only time my face has been on screen. Most of the time, you’re doubling for an actor and your face isn’t shown.”

One of his movie stunts was doubling for an actor named Carlos Sanson in a Netflix movie, “Malibu Rescue, the Second Wave,” who’s running an obstacle course. He’s had around 20 roles counting several small ones that didn’t pay much as he builds up his resume.

Extremely fit, he hasn’t done any weight-lifting for about six years, preferring body exercises like pushups, pull-ups and rock climbing which develops a strong grip.

So far, he’s had no stunt injuries; his only mishaps have been breaking his wrist twice while snowboarding.

Reflecting on how he’s spending his 20s, Soderman has certainly lived up to his ambition about avoiding the nine-to-five routine. He plans to continue stunt work as long as he can, maybe move into stunt coordinating, and, eventually, use his degree to go into real estate.