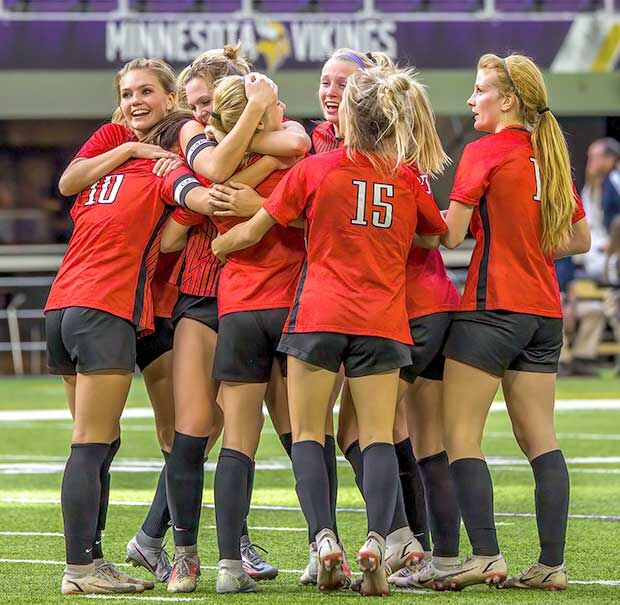 Ally Hamski (third from left) was smothered in hugs after scoring the game’s lone goal with 41 seconds left.

The Cougars including goalie Jordan Metz (purple) sprinted happily toward their student gallery after the win.

Ally Hamski (third from left) was smothered in hugs after scoring the game’s lone goal with 41 seconds left.

The Cougars including goalie Jordan Metz (purple) sprinted happily toward their student gallery after the win.

The Centennial Cougars advanced to the state championship game with a 1-0 victory over Rosemount on a last-minute goal on Thursday morning at U.S. Bank Stadium.

Allyson Hamski’s blast into the upper corner of the net from about 20 yards out with just 41 seconds left prevented an overtime that seemed inevitable in an evenly-matched game.

“The ball popped out (to me). Lauren Ahles left the ball for me to take the shot and I knew that was our chance. I put it in the top corner,” said Hamski, a senior midfielder.

Centennial (19-1) faces Stillwater (15-3-2) in the Class AAA championship game on Saturday at 8 a.m. Stillwater upset top-ranked, previously-unbeaten Edina 3-2 in the other semifinal. Centennial beat Stillwater 1-0 in a non-conference match Oct. 2.

Rosemount (19-2) had blanked its last 12 consecutive opponents and had 18 shutouts in all. Hamski’s goal was just the sixth allowed by the Irish all season.

Rosemount goalie Jordan Hecht made a leaping save of a Brooklyn Bordson shot in the 60th minute, then dived to stop a penalty kick by Bordson a minute later. But she could not reach Hamski’s perfectly-placed shot just under the bar.

“You get limited opportunities,” said Hamski, about trying to score against such a strong defensive team. “It felt amazing.”

Coach Christa Carlson added, “Ally made the (deciding) goal in the shootout against Wayzata, too,” referring to a shot, also into the upper corner, that capped a 3-2 shootout win for a 1-0 victory in the state quarterfinals. “She is a senior captain and she made the most of her opportunities.”

Hecht and Centennial’s Jordan Metz each made seven saves. It was the 12th shutout for the Cougars, who have yielded just nine goals in 20 games. Metz recounted that she stopped one scoring opportunity “with a lucky dive” and another with an outstretched left hand.

“Rosemount was awesome,” said Carlson, former White Bear Lake star in her first year as head coach. “They had a good attack. Honestly, the game could have gone either way.”

Irish coach Gretchen Stramel reflected: “It was a hard-fought game. In the last 40 seconds, that’s a hard time to lose. But I’m sure proud of the way the girls came out and played in the second half. We had multiple scoring opportunities. Centennial controlled the first half. I felt like we won the second half, until (with the late goal) it turned out they won the second half.”

This is Centennial’s ninth state tournament and the third time they’ve reached the finals. Under coach Ginger Flohaug, the Cougars won the 2016 title game over Rosemount 2-1 and lost in 2019 to Maple Grove 2-1.