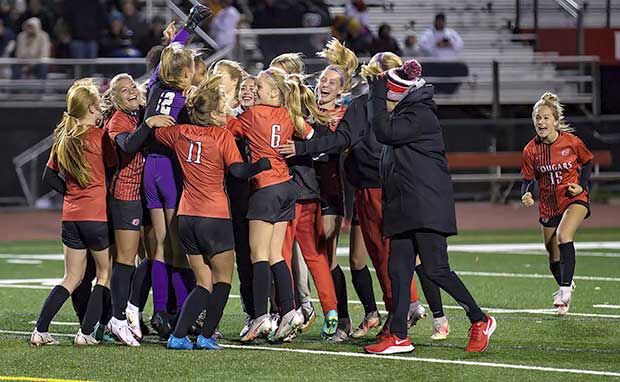 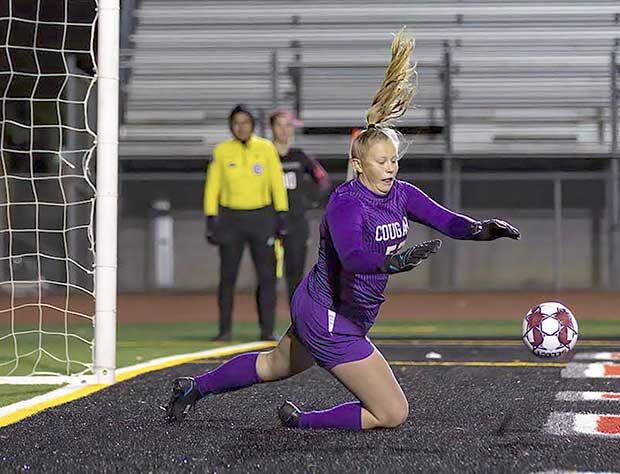 Jordan Metz, Cougar goalkeeper, lunged to make a save against Wayzata. namystphotography.com

Jordan Metz, Cougar goalkeeper, lunged to make a save against Wayzata. namystphotography.com

Asked if anyone enjoys a shootout, Cougar coach Christa Carlson said: “Nobody. It’s not how you want to end a game.”

Centennial advances to the semifinals Thursday, Nov. 4, against either No. 3 Rosemount or Elk River, at U.S. Bank Stadium, starting 10 a.m. In the other first-round match Tuesday, No. 4 Stillwater beat Lakeville North 5-4

“The girls are very excited to go to the ‘Bank.’ That’s been their goal, their dream, all season,” Carlson said.

Lauren Ahles and Brooklyn Bordson also found the net, while Sydney Kubes and Marissa Frost missed. Wayzata had one shot hit the post, one miss the net entirely, and one stopped by Cougar goalie Jordan Metz.

Centennial was playing with close to 20 percent of its regular lineup missing due to illness, injuries and players getting cramps, Carlson said.

Wayzata, which has allowed just two goals in the last seven games, threw a defensive formation, including a sweeper, at the Cougars “that you usually don’t see in high school,” Carlson said, adding that the Trojans have very good athletes in the defensive corps.

Also, a cold wind whipped the field from end to end, hampering each team for one half and one 10-minute overtime.

In regulation, the Cougars had two strong shots by Tatum Trettel and a breakaway by Sarah Strating, but each were rebuffed by Trojan goalie Becca Carroll. Meanwhile, the Cougars got a trio of “real good saves” by Metz, Carlson said.