Danny O’Neill (5) speeds away from STMA offensive players on a 99-yard run after swiping the ball at the goal line. 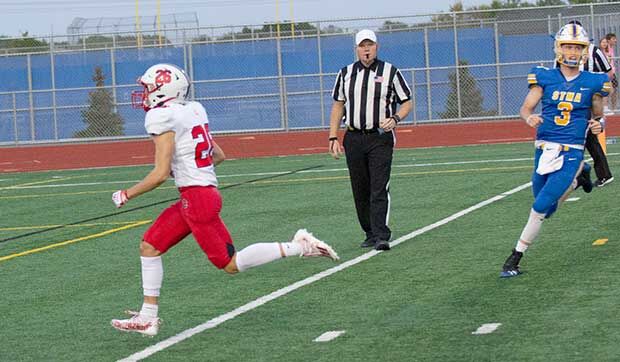 Will Quick dashes to the end zone after picking off a pass by Owen Neros (3). 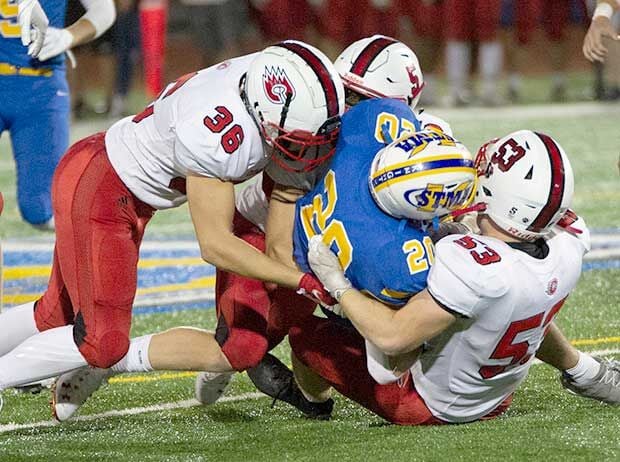 Danny O’Neill (5) speeds away from STMA offensive players on a 99-yard run after swiping the ball at the goal line.

Will Quick dashes to the end zone after picking off a pass by Owen Neros (3).

With two electrifying defensive touchdowns, the Centennial Cougars were on the verge of a huge upset Friday night.

However, the No. 3 ranked St. Michael-Albertville Knights proved to be shock-proof and pulled out a 19-16 win after trailing 16-0 in St. Michael before a huge crowd.

“It was a good game, a fun game,” Cougar coach Mike Diggins said. “We always enjoy playing there.”

Centennial cornerback Will Quick intercepted an Owen Neros pass on the first play from scrimmage with an open field in front of him to return it 20 yards for a touchdown. The extra point kick failed due to a mishandled snap.

Another cornerback, Daniel O’Neill, ran 99 yards with a fumble recovery to give the Cougars a 16-0 lead in the third quarter when the Knights had a first-and-goal at the one-yard line. O’Neill also had a wide-open field. At the 30, he looked back and saw nobody was near him.

“Their running back tried to reach the ball over the line,” Diggins said, “and Danny took it away. (The ball) might have been over the line, too, as we looked at the film. But that’s why we tell kids, don’t do that.”

The Cougar defense made two other huge plays in the first half, which ended with them up 9-0. They stopped a fourth-and-one play at the Knights 30, setting up Eli Nowacki’s 28-yard field goal. And with the Knights on the Cougar 20 in the final minute, outside linebacker Lance Nielsen Jr. made a soaring interception in the end zone with the intended receiver behind him.

However, after yielding just 85 yards in the first half, the Cougar defense, on the field most of the game, gave up 249 yards to the talented Knights in the second half.

“Our defense got tired,” Diggins said, “We used some of those kids on offense and we ran only 13 plays on offense in the second half. Five of our guys go in and out both ways.”

The Knights (2-0), after giving up the fumble recovery touchdown that left them behind 16-0 rather than 9-7, were hardly deflated by the turn of events, as they dominated the rest of the game.

Neros, shaking off the two disastrous interceptions in the first half, fired two perfect over-the-top balls to Riley Purcell for touchdowns of 32 and 43 yards on back-to-back series, drawing the Knights within 16-13 in the third quarter. Neros missed an extra-points pass after the second TD.

Their go-ahead touchdown drive was mostly on the ground, capped by Max Keefer’s one-yard run with five minutes left. A missed PAT kick by the Knights left the Cougars within three points, but STMA’s Logan Jans and Bo Bitzer intercepted passes in the time remaining.

Neros finished 8-for-13 for 163 yards. The Knights had 181 yards rushing, with Ryan Kayden gaining 73 in eight carries, Keefer 51 in 16 carries and Connor Luongvan 50 in nine carries.

The Cougars, a week after being held to less than 50 yards in a 7-0 loss at Stillwater, mustered just 118 yards — 102 rushing and 16 passing — and never mounted a scoring threat. Daylen Cummings was 3-for-12 for 16 yards with two pickoffs. Twice he had a receiver open behind the defense but overthrew by inches. Landen Liu carried 15 times for 54 yards and Cummings 10 for 23.

“Our offense isn’t off to a good start but the kids are working hard and we are going to get it going eventually,” said Diggins. “Daylen is a sophomore who is learning. We are playing in the Gold Division and there aren’t going to be any bad defenses where he could get his feet wet. He’s facing the best players in the state and we feel he is getting better each week.”

The Cougars will host Totino-Grace, also 0-2, next Friday.