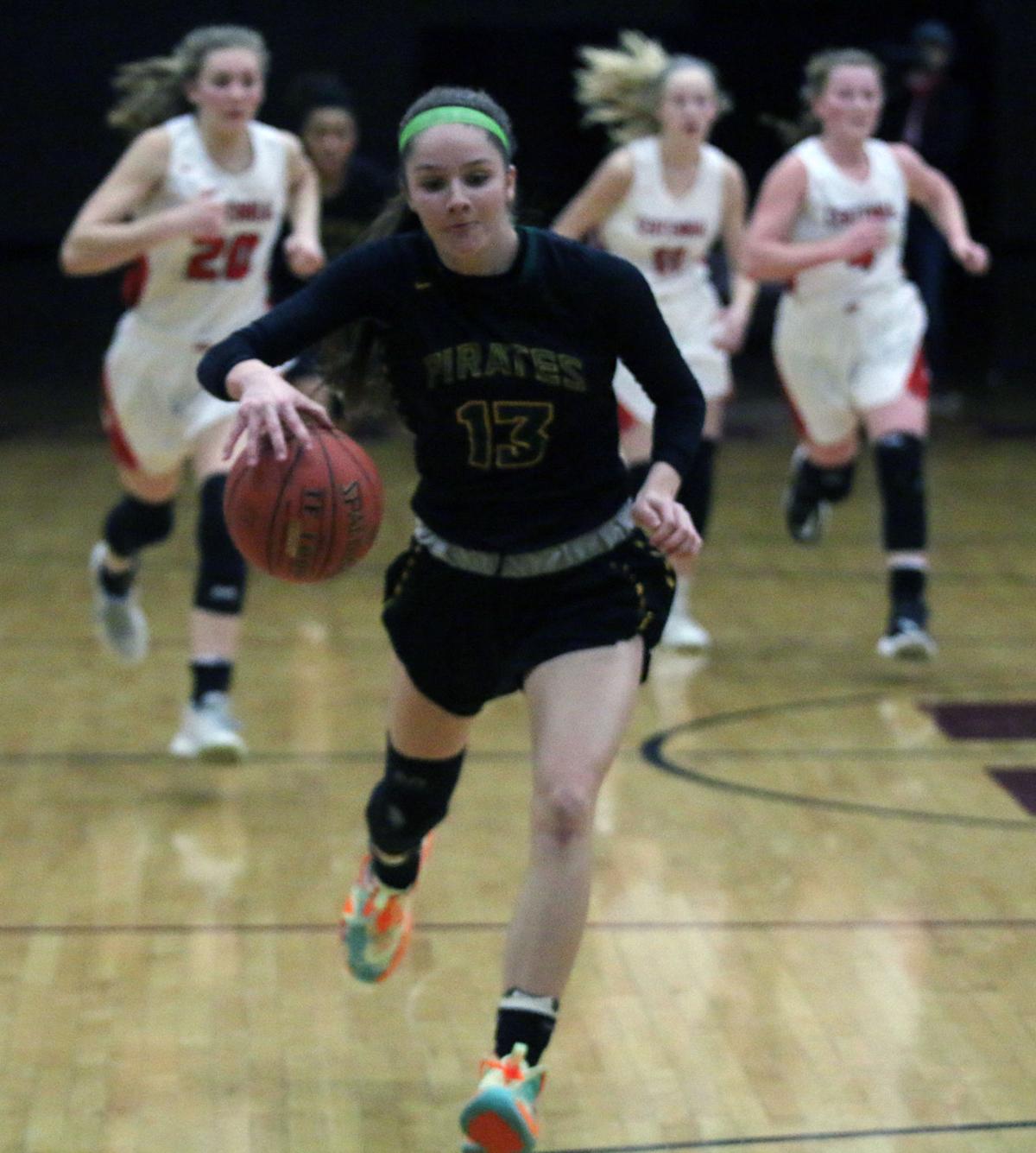 Lauren Frost of Park Center was about to make a behind-the-back pass to Adalia McKenzie for a breakaway basket with Centennial players trailing. 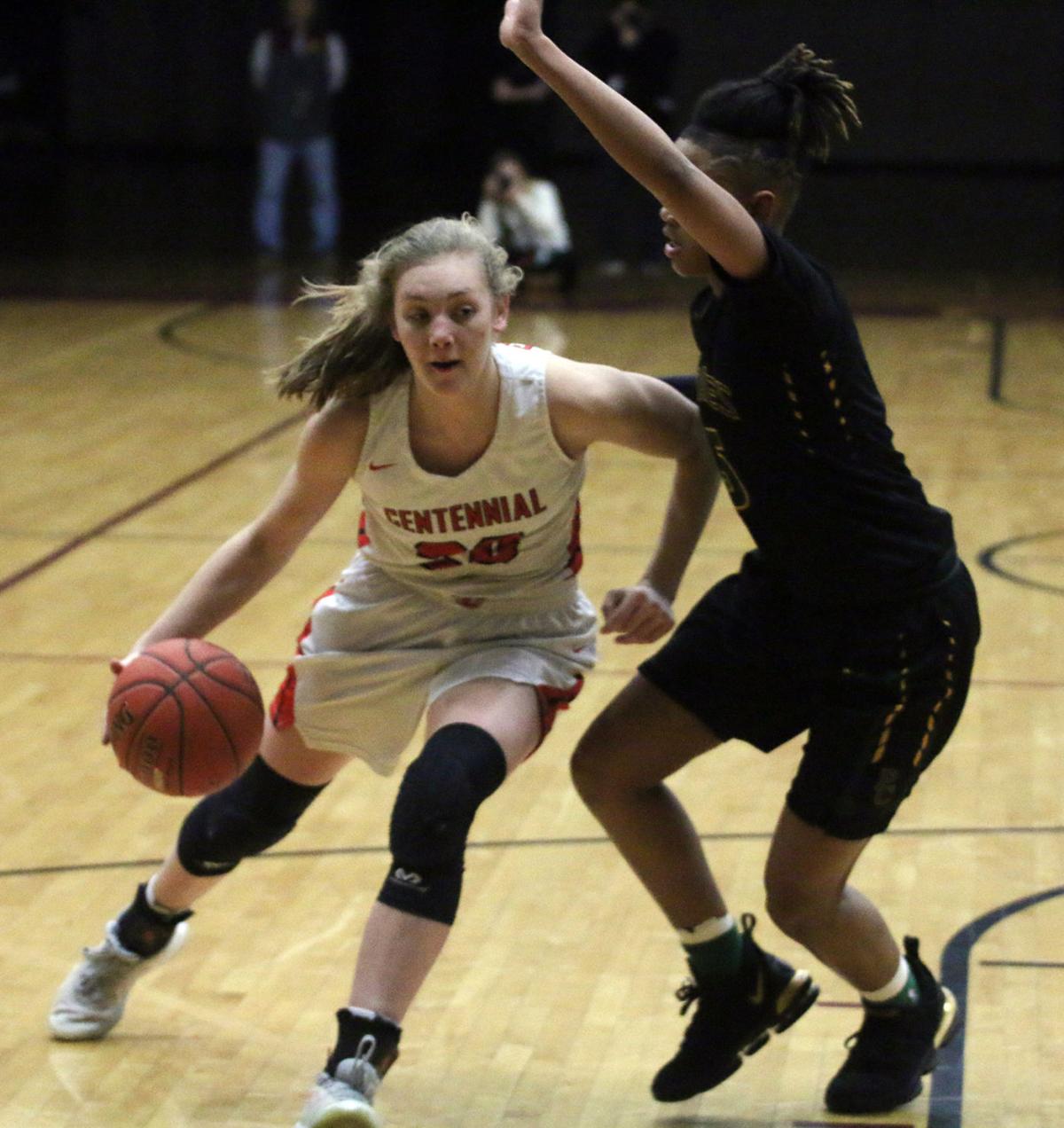 Jodi Anderson, who scored 24 points for Centennial, tries to find an opening. 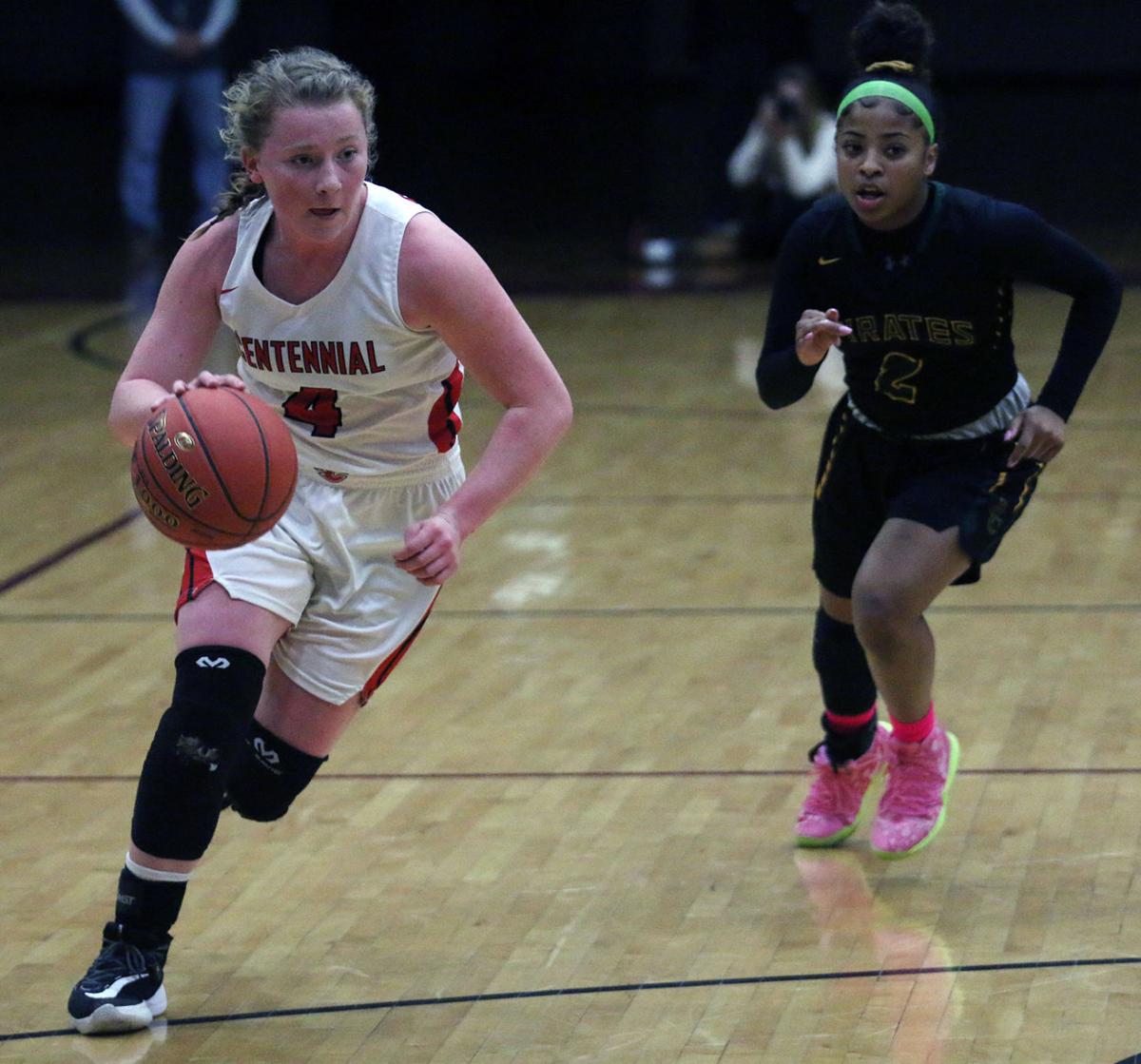 Grace Johnson, senior point guard in the last game of a four-year varsity tenure, brings the ball up. 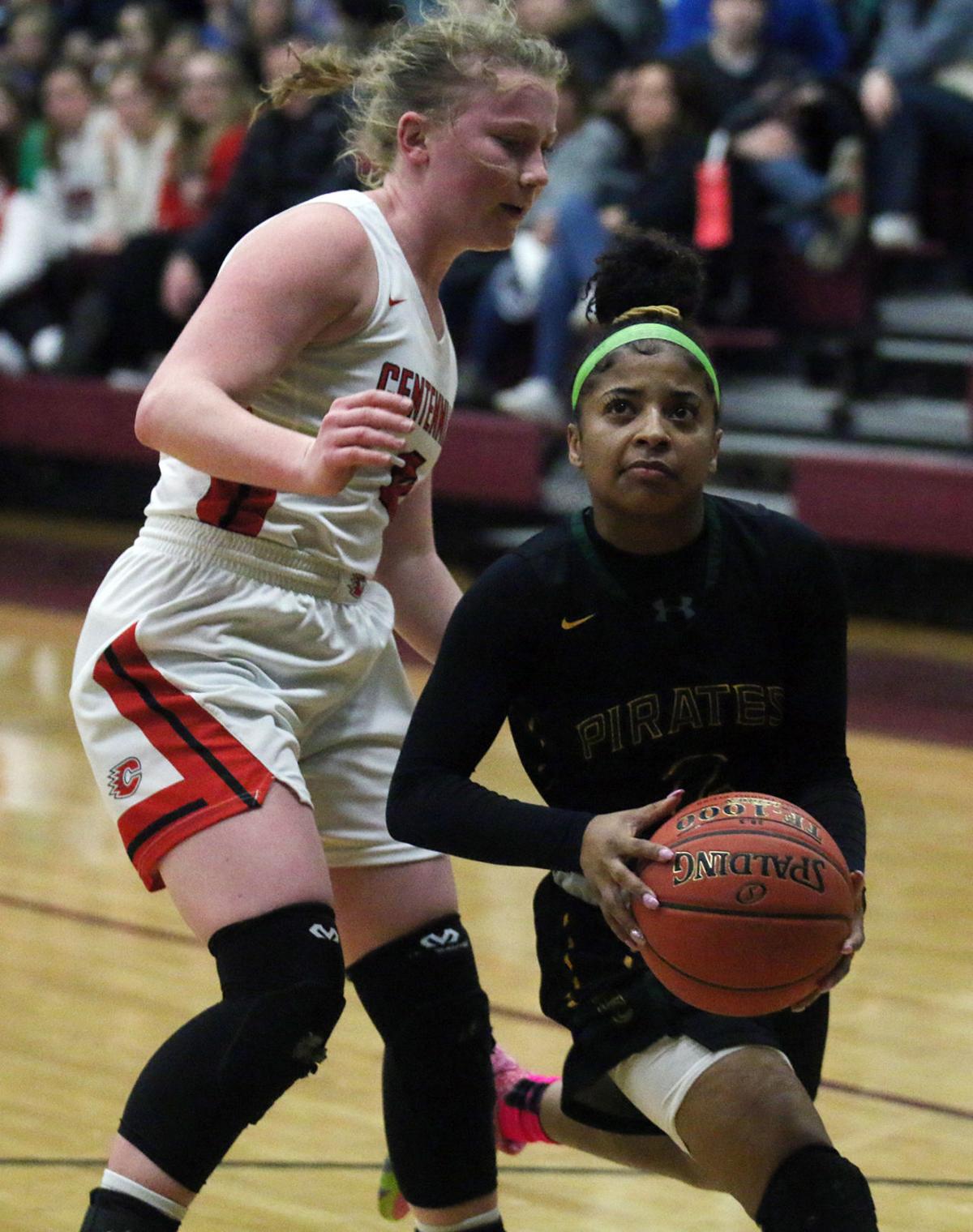 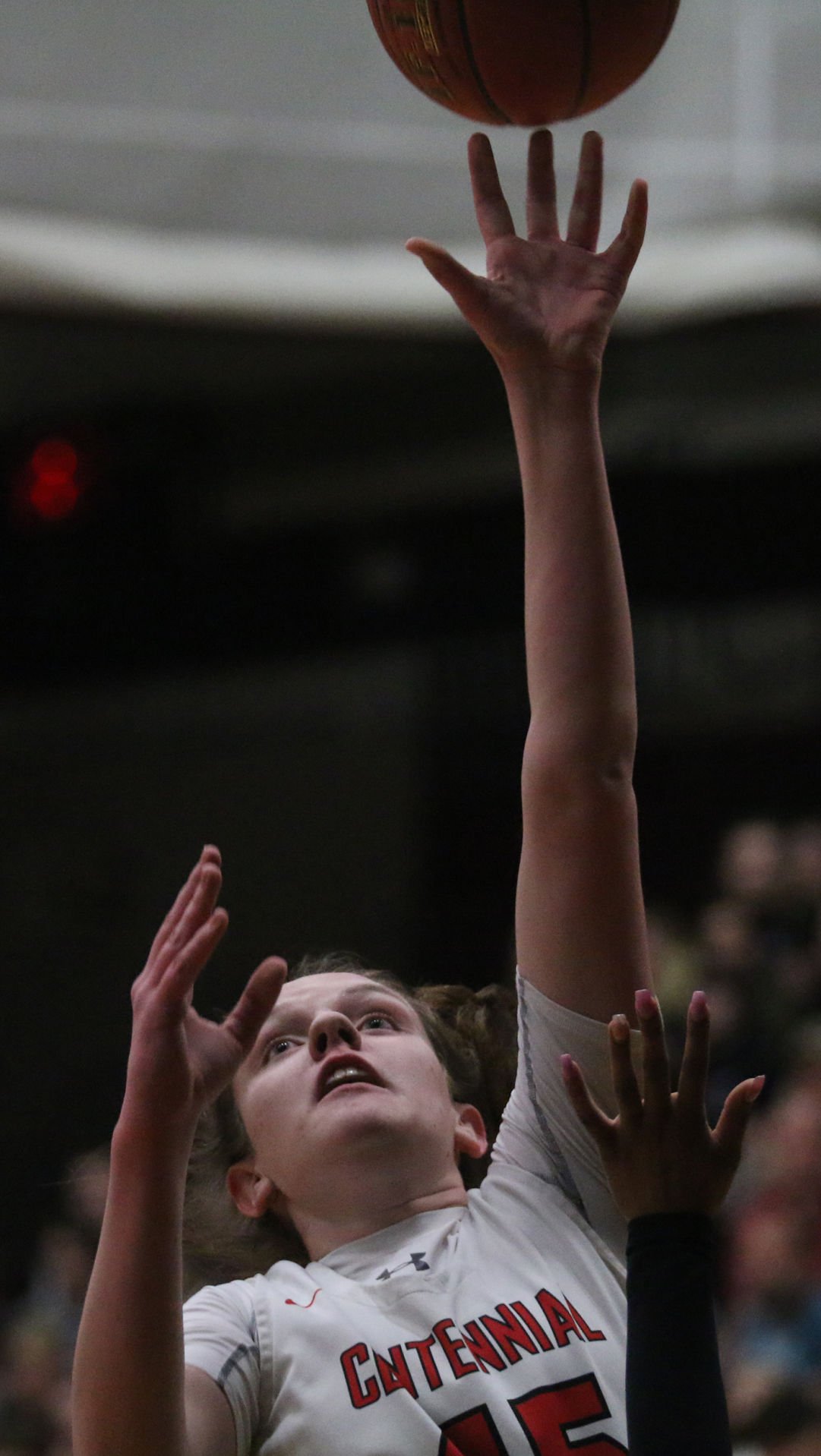 Jenna Guyer lays up two of her 12 points.

Lauren Frost of Park Center was about to make a behind-the-back pass to Adalia McKenzie for a breakaway basket with Centennial players trailing.

Jodi Anderson, who scored 24 points for Centennial, tries to find an opening.

Grace Johnson, senior point guard in the last game of a four-year varsity tenure, brings the ball up.

Jenna Guyer lays up two of her 12 points.

This time, Park Center made sure there would be no last-second shot by Centennial.

The Pirates cruised to the Section 5AAAA championship with a 68-52 conquest of the Cougars, leading by as much as 24 points in the second half, Thursday evening in Anoka.

Centennial beat the Pirates 73-71 in early January on a three-pointer just before the buzzer after trailing by double digits. Last year, Centennial was section champion without having to play Park Center, which was upset by Spring Lake Park in the semifinals.

But Park Center earned another shot at Centennial on Thursday night and made the most of it, powered mainly by supremely-talented junior Adelia McKenzie with 28 points and red-hot senior Lauren Frost with six 3-pointers and 22 points.

“It was one of those games where we needed to play our ‘A’ game and hope that they struggled, but it ended up going the other way,” reflected Jamie Sobolik, completing his first year as Cougar head coach. “I was very proud of the effort our kids gave. They never quit or got down on themselves and battled to the very end.”

Centennial, after graduating two Division I players from last year’s state third-place team, finished another strong season with a 21-8 record after a 12-1 start.

Junior guard Jodi Anderson jumped in 24 points to Centennial from getting blown out completely on a night where they needed some 3-pointers and didn’t hit many. Junior post Jenna Guyer added 12 points.

The Cougars have fairly good speed themselves but Park Center out-quicked them the whole game for steals, long rebounds and blocked shots while making the Cougars rush their shots inside and cast from long range more than they wanted.

“Our goal was to slow their transition down, keep them out of the lane, and force them to shoot from the outside in hopes that they would be off,” Sobolik said.

Park Center beat their full court press early and the Cougars moved back to the quarter court. They tied to mix up zones, man-to-man’s and traps in the second half “but the always seemed to have an answer.”

The Pirates led 38-24 at the half with McKenzie scoring 20 points, and Frost kept their foot on the pedal at the outset of the second half. The Nebraska-Omaha recruit bombed in 3-pointers from the wing their first two times down the floor, led a fast break culminated with her behind-the-back pass to McKenzie for another layup, then scored on another breakaway herself with a feed from guard Aaliyah Ragulen opening a 46-24 lead.