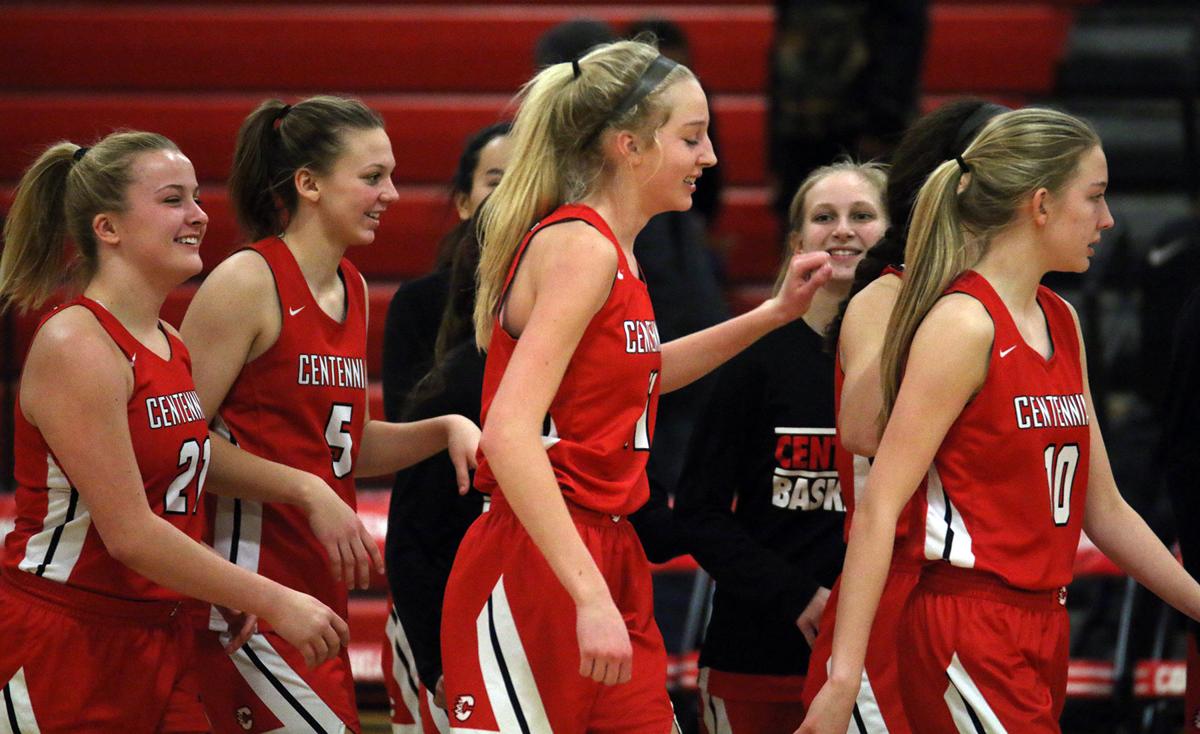 Hannah Herzig (middle) beams as the Cougars savor a 73-71 win over an arch rival. 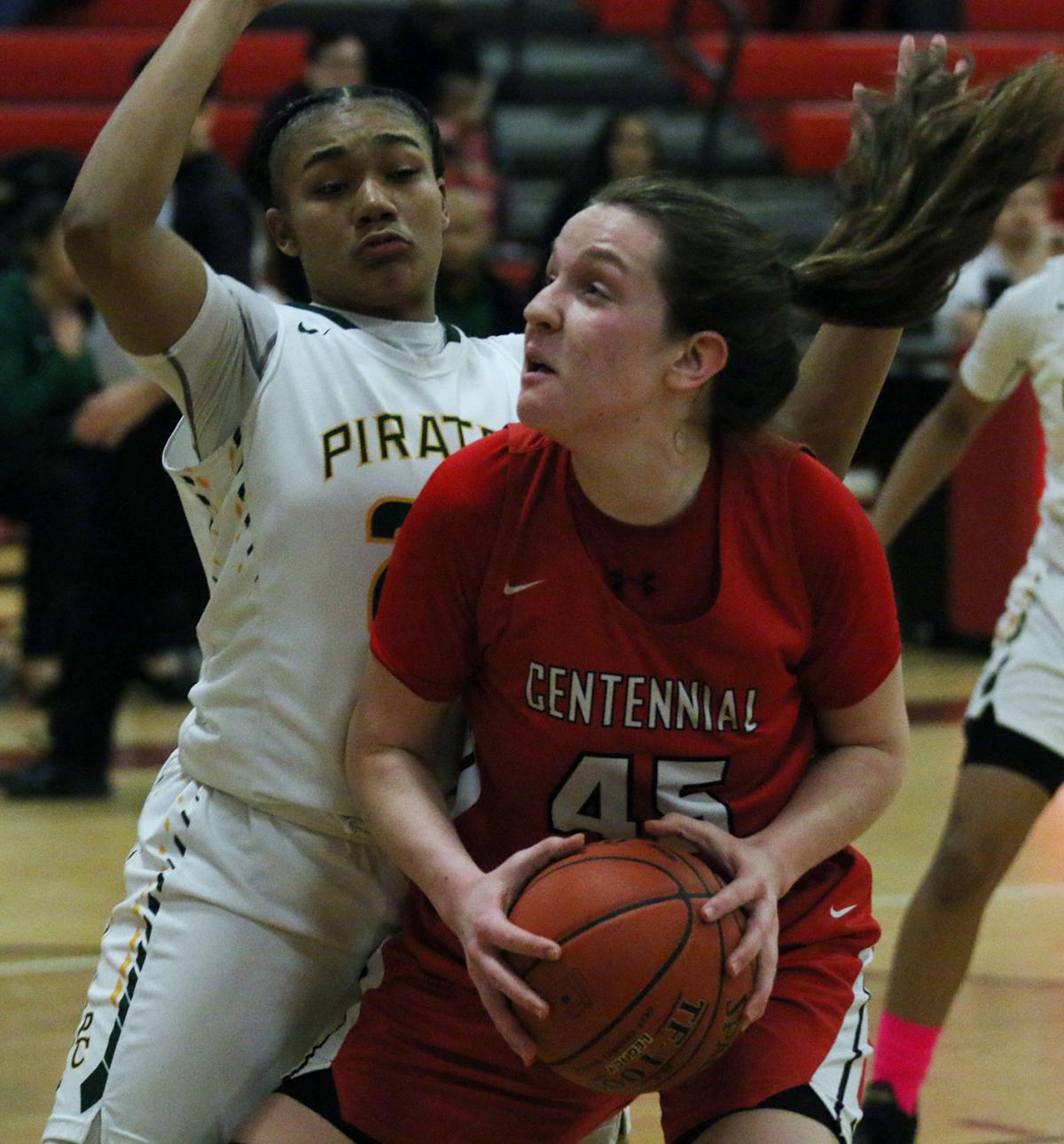 Jenna Guyer squared up before scoring two of her 28 points, with Adalia McKenzie guarding her. 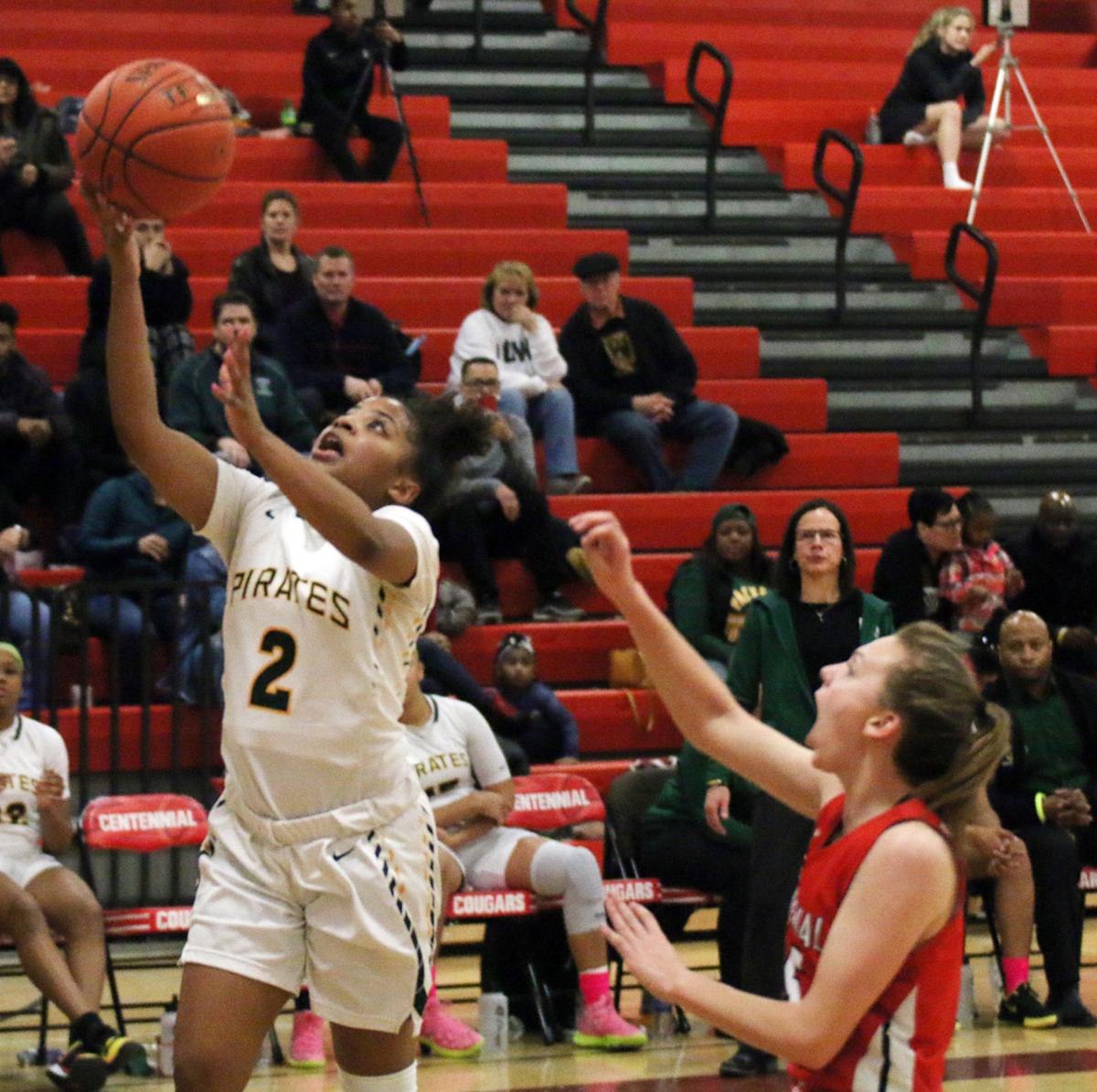 Aayilah Ragulen lays in two of her 25 for Park Center.

Hannah Herzig (middle) beams as the Cougars savor a 73-71 win over an arch rival.

Jenna Guyer squared up before scoring two of her 28 points, with Adalia McKenzie guarding her.

Aayilah Ragulen lays in two of her 25 for Park Center.

Centennial trailed Park Center the entire game, until three seconds remained, when Hannah Herzig delivered a three-point shot to win this top-ten showdown of conference and section rivals 73-71 on Tuesday evening at home.

“I looked to see how much time was left and knew that I had to shoot,” said Herzig about her game-winner from the right wing that rustled the cords with 2.7 second left, “and then I took off down the court to get back on defense.”

“I wasn’t sure if that was the shot we wanted,” coach Jamie Sobolik said, “but our sophomore had ice water in her veins.”

The Cougars had an inbounds play with about 10 seconds left. They wanted 6-2 post Jenna Guyer, who had 28 points, to take the shot, but she was covered. Guyer flipped to guard Jodi Anderson, who had 18 points, in the lane, but Anderson was quickly covered also. She spotted Herzig, who was wide open, Herzig hit nothing but net, finishing with 15 points.

But No. 4 Centennial (13-2) held the Pirates to one field goal in the last 7:15 of the game, forced several turnovers and chipped away at the lead.

“Our team seems to really enjoy the intensity of the defense that we need later in games when we are down,” Sobolik said, noting that this is not the first time they’ve rallied against strong teams.

Park Center has a powerful, nimble forward, Adalia McKenzie, who’s averaging 31.4 points, although Cougars “held” her to 21 points. The Pirates are fleet footed and have some amazing quick hands resulting in a lot more steals that the Cougars are accustomed to giving up. Their speedy 5-2 senior guard Aaliyah Ragulen poured in 25 points including several 3-pointers.

The Pirates had an unlucky break with about 1:30 left when T’Naye Griffin, who had nine points, fell to the floor with a leg injury, moaning in pain. Before a time out was called, the Cougars got a 5-on-4 layup by Anderson that pulled them within 71-70.

The Cougars forced a mid-court turnover with a half-minute left, leading to a foul that put Anderson on the line. But she missed twice. However, the Pirates threw the ball out of bounds bringing the ball up to court under pressure and the Cougars had another chance.

Centennial had an excellent game shooting, hitting 56 percent on field goals and 40 percent on three’s. They had four double-digit scorers. Camille Cummings was the other with 10 points. However, they almost lost the game at the line, making 11 of 20.

Jenna Guyer got her 28 points on 11-for-14 shooting, while pulling down 19 rebounds and blocking four shots. She played all 36 minutes and made a good decision in the final seconds by not forcing a shot when tightly guard.

About Park Center, she said, “They are really fast and really strong and have a lot of athletic ability. We thought we could beat them. We have been working hard for them in practice.”

Anderson had 11 rebounds, six assists and five steals along with her 18 points. Herzig, 2-for-3 on three’s, had five steals and four assists with her 15 points. Camille Cummings had four steals with her 10 points.

The Cougars now have a leg up on No. 1 seed in Section 5AAAA, having also beaten another of the top section teams, Roseville Area.