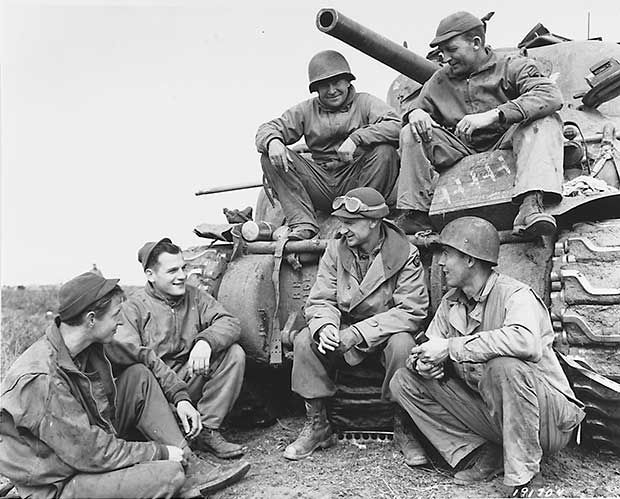 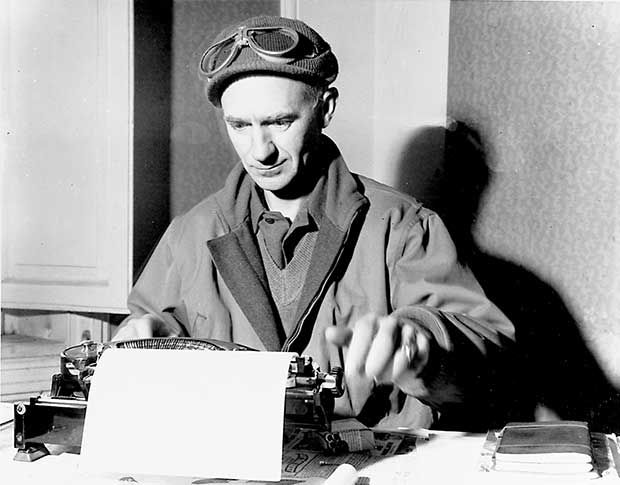 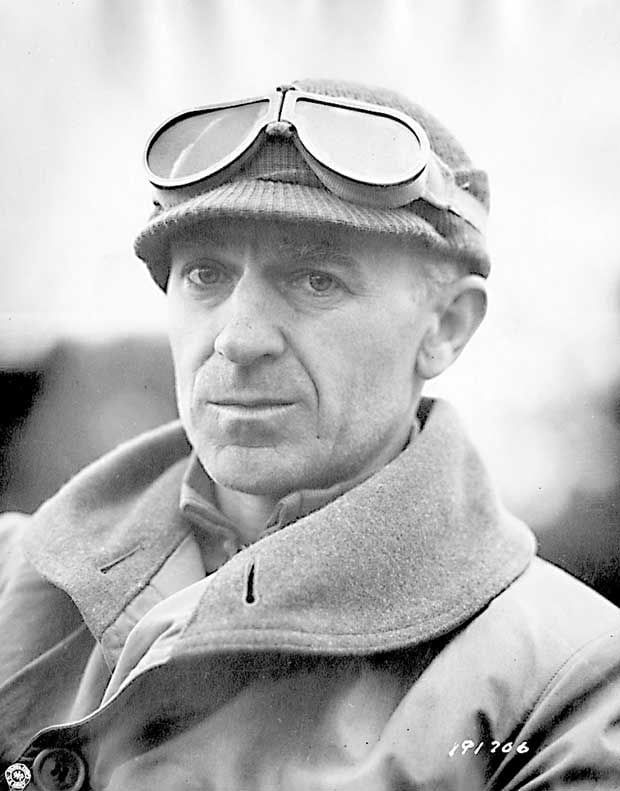 In commemoration of the 75th anniversary of D-day, we are running a column by Ernie Pyle, considered one of history’s greatest war correspondents. His column, written six days after the Normandy invasion, and photographs of Pyle, have been made available by the National Newspaper Association for reprinting.

We chose a column called “A Pure Miracle” to commemorate June 6, 1944, when more than 160,000 Allied troops landed along a 50-mile stretch of heavily-fortified French coastline. More than 9,000 soldiers were killed or wounded fighting Nazi Germany on the beaches of Normandy.

Pyle, 44, was later killed by a Japanese machine gun on the tiny Pacific island of le Shima in 1945 during the Battle of Okinawa. His New York Times obituary said his syndicated columns were delivered to more than 14 million homes at the time of his death. Pyle won the Pulitzer Prize in 1944 for his newspaper accounts of “dogface” infantry soldiers.

NORMANDY BEACHHEAD, June 12, 1944 – Due to a last-minute alteration in the arrangements, I didn’t arrive on the beachhead until the morning after D-day, after our first wave of assault troops had hit the shore.

By the time we got here the beaches had been taken and the fighting had moved a couple of miles inland. All that remained on the beach was some sniping and artillery fire, and the occasional startling blast of a mine geysering brown sand into the air. That plus a gigantic and pitiful litter of wreckage along miles of shoreline.

Submerged tanks and overturned boats and burned trucks and shell-shattered jeeps and sad little personal belongings were strewn all over these bitter sands. That plus the bodies of soldiers lying in rows covered with blankets, the toes of their shoes sticking up in a line as though on drill. And other bodies, uncollected, still sprawling grotesquely in the sand or half hidden by the high grass beyond the beach.

That plus an intense, grim determination of work-weary men to get this chaotic beach organized and get all the vital supplies and the reinforcements moving more rapidly over it from the stacked-up ships standing in droves out to sea.

Now that it is over it seems to me a pure miracle that we ever took the beach at all. For some of our units it was easy, but in this special sector where I am now our troops faced such odds that our getting ashore was like my whipping Joe Louis down to a pulp.

In this column I want to tell you what the opening of the second front in this one sector entailed, so that you can know and appreciate and forever be humbly grateful to those both dead and alive who did it for you.

Ashore, facing us, were more enemy troops than we had in our assault waves. The advantages were all theirs, the disadvantages all ours. The Germans were dug into positions that they had been working on for months, although these were not yet all complete. A one-hundred-foot bluff a couple of hundred yards back from the beach had great concrete gun emplacements built right into the hilltop. These opened to the sides instead of to the front, thus making it very hard for naval fire from the sea to reach them. They could shoot parallel with the beach and cover every foot of it for miles with artillery fire.

Then they had hidden machine-gun nests on the forward slopes, with crossfire taking in every inch of the beach. These nests were connected by networks of trenches, so that the German gunners could move about without exposing themselves.

Throughout the length of the beach, running zigzag a couple of hundred yards back from the shoreline, was an immense V-shaped ditch fifteen feet deep. Nothing could cross it, not even men on foot, until fills had been made. And in other places at the far end of the beach, where the ground is flatter, they had great concrete walls. These were blasted by our naval gunfire or by explosives set by hand after we got ashore.

Our only exits from the beach were several swales or valleys, each about one hundred yards wide. The Germans made the most of these funnel-like traps, sowing them with buried mines. They contained, also, barbed-wire entanglements with mines attached, hidden ditches, and machine guns firing from the slopes.

This is what was on the shore. But our men had to go through a maze nearly as deadly as this before they even got ashore. Underwater obstacles were terrific. The Germans had whole fields of evil devices under the water to catch our boats. Even now, several days after the landing, we have cleared only channels through them and cannot yet approach the whole length of the beach with our ships. Even now some ship or boat hits one of these mines every day and is knocked out of commission.

The Germans had masses of those great six-pronged spiders, made of railroad iron and standing shoulder-high, just beneath the surface of the water for our landing craft to run into. They also had huge logs buried in the sand, pointing upward and outward, their tops just below the water. Attached to these logs were mines.

In addition to these obstacles they had floating mines offshore, land mines buried in the sand of the beach, and more mines in checkerboard rows in the tall grass beyond the sand. And the enemy had four men on shore for every three men we had approaching the shore.

And yet we got on.

Beach landings are planned to a schedule that is set far ahead of time. They all have to be timed, in order for everything to mesh and for the following waves of troops to be standing off the beach and ready to land at the right moment.

As the landings are planned, some elements of the assault force are to break through quickly, push on inland, and attack the most obvious enemy strong points. It is usually the plan for units to be inland, attacking gun positions from behind, within a matter of minutes after the first men hit the beach.

Our men simply could not get past the beach. They were pinned down right on the water’s edge by an inhuman wall of fire from the bluff. Our first waves were on that beach for hours, instead of a few minutes, before they could begin working inland.

You can still see the foxholes they dug at the very edge of the water, in the sand and the small, jumbled rocks that form parts of the beach.

Medical corpsmen attended the wounded as best they could. Men were killed as they stepped out of landing craft. An officer whom I knew got a bullet through the head just as the door of his landing craft was let down. Some men were drowned.

The first crack in the beach defenses was finally accomplished by terrific and wonderful naval gunfire, which knocked out the big emplacements. They tell epic stories of destroyers that ran right up into shallow water and had it out point-blank with the big guns in those concrete emplacements ashore.

When the heavy fire stopped, our men were organized by their officers and pushed on inland, circling machine-gun nests and taking them from the rear.

As one officer said, the only way to take a beach is to face it and keep going. It is costly at first, but it’s the only way. If the men are pinned down on the beach, dug in and out of action, they might as well not be there at all. They hold up the waves behind them, and nothing is being gained.

Our men were pinned down for a while, but finally they stood up and went through, and so we took that beach and accomplished our landing. We did it with every advantage on the enemy’s side and every disadvantage on ours. In the light of a couple of days of retrospection, we sit and talk and call it a miracle that our men ever got on at all or were able to stay on.

Before long it will be permitted to name the units that did it. Then you will know to whom this glory should go. They suffered casualties. And yet if you take the entire beachhead assault, including other units that had a much easier time, our total casualties in driving this wedge into the continent of Europe were remarkably low – only a fraction, in fact, of what our commanders had been prepared to accept.

And these units that were so battered and went through such hell are still, right at this moment, pushing on inland without rest, their spirits high, their egotism in victory almost reaching the smart-alecky stage.

Their tails are up. "We’ve done it again," they say. They figure that the rest of the army isn’t needed at all. Which proves that, while their judgment in this regard is bad, they certainly have the spirit that wins battles and eventually wars.

Permission to distribute  and re-publish Ernie Pyle’s columns was given by the Scripps Howard Foundation.