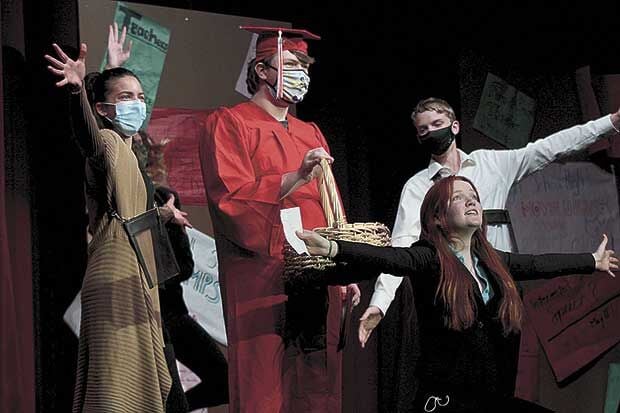 Centennial High School students perform a musical number in a rehearsal of “The Dance.” 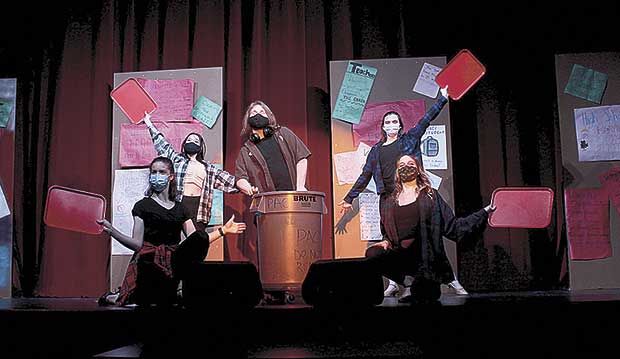 High school experiences connect people in a myriad of unexpected ways—a theme at the heart of Centennial High School’s performance of “The Dance.” 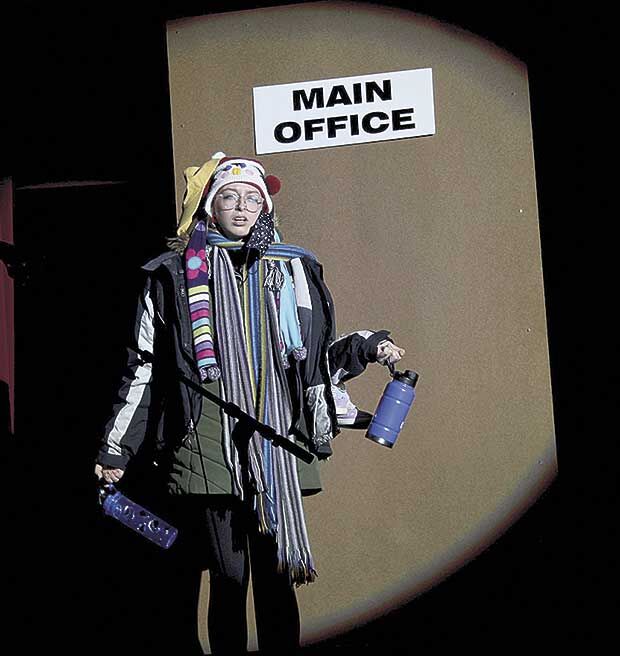 Senior Erin Schmidt, wrapped in forgotten scarves, delivers a monologue from the perspective of the Lost and Found.

Centennial High School students perform a musical number in a rehearsal of “The Dance.”

High school experiences connect people in a myriad of unexpected ways—a theme at the heart of Centennial High School’s performance of “The Dance.”

Senior Erin Schmidt, wrapped in forgotten scarves, delivers a monologue from the perspective of the Lost and Found.

Centennial students knew the rules would be a little different when they returned to the stage—but they didn’t care. They are happy just to be back together.

“The Dance” is the name of the Centennial theater department’s spring play, which marks the first opportunity for the high school students to return to in-person performance. The script was specially commissioned for Centennial schools and written by Twin Cities playwright Shanan Custer.

During the first few months of COVID-19, creators were struggling to find outlets for their usual work under the intense public safety restrictions. Co-director Eric Webster reached out to Custer and several accomplished Twin Cities musicians to collaborate on something that could be specifically designed to work in the midst of a pandemic.

“The Dance” is designed to be as socially distanced as possible, with a minimal number of students onstage, and several solo monologues. For the most part, students can even keep their masks on. The theater department held three other plays during the 2020-2021 school year, but all were done digitally over Zoom, which required quite a bit of editing. The return to in-person performance has been a welcome change for both students and adult staff.

“It’s all about them seeing each other and getting back,” Webster said. “They’re having fun, they enjoy being back together, we’ve overcome and improvised a way through all of the differences, and we’re doing the best we can.”

“The Dance” is a series of intertwining scenes set at High School High, showing a day in the life from numerous perspectives—student council members, custodial staff, even a personification of the Lost and Found. A pair of students navigate their feelings as they rehearse “Romeo and Juliet,” a mother and daughter discuss the nuances of high school rites of passage, and dancers with lunch trays intermittently whirl between the scenes. Meanwhile, the upcoming high school dance seems to loom over everyone’s lives.

“It’s really special to do a new show,” said senior Nina Broberg. “It’s kind of a unique opportunity to go out on your own and not really have anything to follow. I think that Shanan Custer, who wrote our script, is an amazing playwright and we’re really lucky to have her write for us.”

“We wanted some of these kids, especially some of the seniors who weren’t going to get a musical, to sing onstage,” Webster said.

Since the play was written over the course of a lengthy pandemic, the themes of connection and resilience are especially resonant for both the actors and the audience, Webster said.

“This was written in the last year and I think that’s extremely important,” Webster said. “We’ve all learned that you can’t count on anything—but there are things you can count on, and that is our relationships to each other.”

Something as ordinary as a high school dance can be momentous or mundane—depending on your perspective.

Senior Megan Strang, a member of the tech crew, shared her thoughts on returning to in-person theater.

“Just being able to be hands on in the booth instead of doing something online for our last show as high schoolers, that’s a huge deal right now, because last year’s class just kind of lost everything,” she said. “We’re just happy with what we’re getting.”

While the cast and crew are able to be together onstage, there won’t be an in-person audience for “The Dance.” Instead, the final performance will be aired on Friday, May 7 at 7 p.m. Viewers can attend by logging on to centennialtheatre.org.

The theater department is asking for donations of $10 or more, since regular ticket sales aren’t quite possible under the restrictions of COVID-19. Webster also added that if anyone wants to view the performance but can’t make the May 7 showing will be able to make a donation to watch the show at a later time.