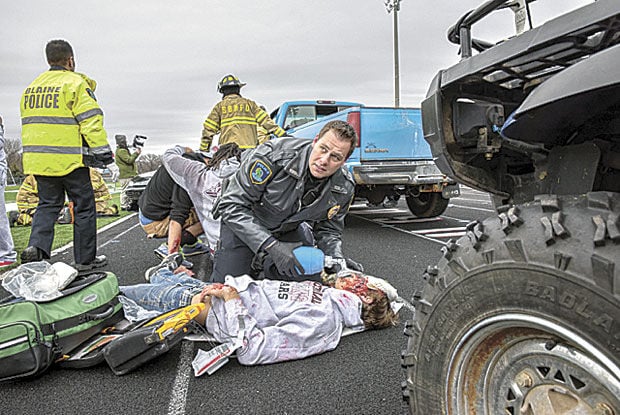 Detective Ben J. Johnson, Blaine Police Department, aids Bailey Ludwig, one of the students “injured” in the simulated crash. The event was also used as a training exercise for community partners to ensure a healthy and safe community. — Photo by Dee Ann Sibley 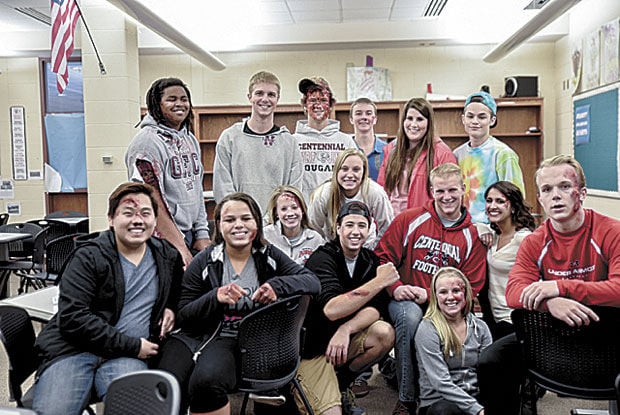 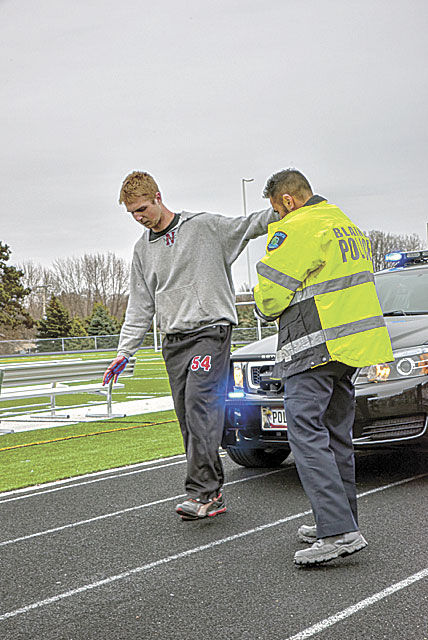 Detective Ben J. Johnson, Blaine Police Department, aids Bailey Ludwig, one of the students “injured” in the simulated crash. The event was also used as a training exercise for community partners to ensure a healthy and safe community. — Photo by Dee Ann Sibley

A simulated fatal crash at Centennial High School last week was designed to drive home a message to teens that it is unsafe to drive while drinking and/or distracted.

The simulation was part of a two-day event focused on challenging teens to think about drinking, driving, personal safety, the responsibility of making mature decisions and the impact their decisions have on family, friends and the community. Teens saw firsthand the emergency responders at work after the crash happened, as well as the emotion that accompanies a fatality.

In the simulation, a student trapped inside a vehicle is recovered, pronounced dead and removed from the scene by a funeral director from Mueller-Bies funeral home. Another student is crushed by an ATV driven by a drunk student, and is airlifted by Life Link III to Unity Hospital, where he dies. A third student is arrested for drunk driving. A fourth student, a distracted driver, kills another student while texting and using Snapchat. Paramedics also treated several students for minor injuries.

Other activities included taking the arrested drivers to jail; transporting the critically injured patient to a local trauma center where doctors simulate attempts to save his life; a doctor notifying parents of a child’s untimely death; and organ procurement team members discussing the option of organ donation. Meanwhile, the student who died on-scene is placed in a body bag and taken to the mortuary where a family member can identify the body.

“The simulation took the collaboration of many partners, all working together to ensure a healthy and safe community,” said Blaine Police Chief Chris Olson. “An impaired or distracted driver not only harms themselves but can have a devastating impact on other drivers on the road, their families and the overall community.”

Day two of the simulation included a mock funeral assembly for the two students who were killed and the reading of letters written to family by students involved as if they had died. Speakers included Anoka County Attorney Tony Palumbo and a representative from MADD, who talked about the death of her daughter who died as the result of a poor decision by a drunk driver.

“Images of broken parents being notified that their child has been killed, young teenagers being handcuffed and sentenced in court, and large poster-sized obituaries on display in the hallways at school all add to the message that many lives can be painfully affected if a student chooses to drive while distracted or under the influence,” said Barb Culp, a parent of one of the teens who “died” in the 2013 simulation.