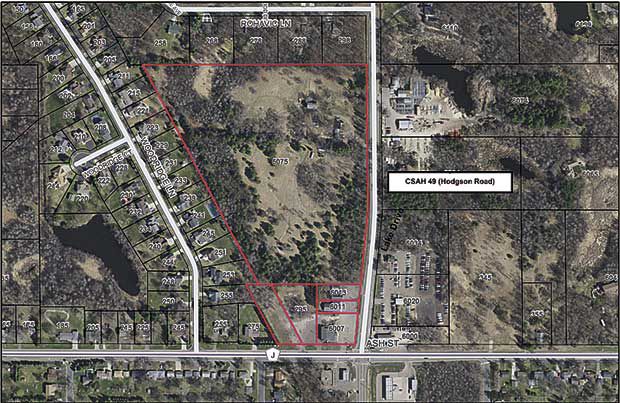 Lyngblomsten is proposing to build a senior living campus on the 20-acre site located in the northwest quadrant of Hodgson Road and County Road J/Ash Street. 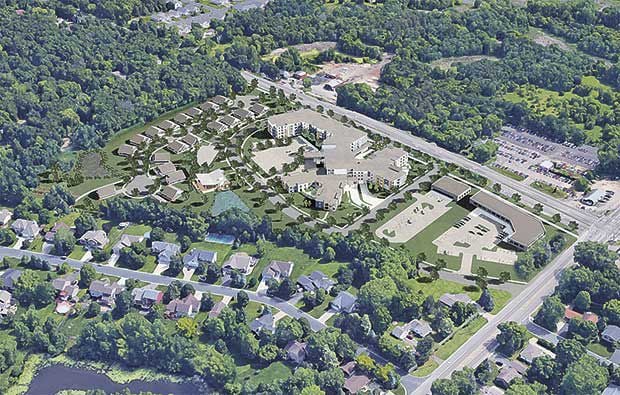 The proposed senior living campus will include 218 units, a mixture of cottage homes and a senior living campus that features independent living, assisted living and a skilled nursing facility. The concept plan also calls for a standalone 6,000-square-foot restaurant with an outdoor patio and future commercial development.

An architect’s rendering of the main building of the senior living community proposed by Lyngblomsten for the corner of County Road J and Hodgson Road in Lino Lakes. The campus is proposed to include 218 units.

Lyngblomsten is proposing to build a senior living campus on the 20-acre site located in the northwest quadrant of Hodgson Road and County Road J/Ash Street.

The proposed senior living campus will include 218 units, a mixture of cottage homes and a senior living campus that features independent living, assisted living and a skilled nursing facility. The concept plan also calls for a standalone 6,000-square-foot restaurant with an outdoor patio and future commercial development.

An architect’s rendering of the main building of the senior living community proposed by Lyngblomsten for the corner of County Road J and Hodgson Road in Lino Lakes. The campus is proposed to include 218 units.

LINO LAKES — Following 20 years of proposals for development on the corner of County Road J and Hodgson Road, one proposal is getting a bit closer to being shovel-ready.

The Planning and Zoning Commission discussed a proposal from Lyngblomsten, a senior care provider with an existing campus in St. Paul, at its Feb. 13 meeting.

Last May, Lyngblomsten presented its concept plan to the City Council for a senior living campus on the 20-acre site located in the northwest quadrant of Hodgson Road and County Road J/Ash Street. After a lot of discussion at the city staff level and advisory boards and input from the neighbors, the concept has been refined.

Lyngblomsten has submitted a land use application (for Phase I) for rezoning, planned unit development (PUD) development stage plan, preliminary plat and site plan review for the development of a senior living community, future restaurant and future commercial building. The development of the site is guided by the council's adopted (2007) master plan for the area.

The site has previously been considered for a grocery store and, most recently, a housing development known as Eastern Heights, a project of Hampton Companies.

The project is proposed to occur in three phases. The first phase is slated for a senior living community with a total of 218 units, which will include a mixture of cottage homes and a senior living campus that features independent living, assisted living and a skilled nursing facility.

The community includes complementary campus amenities such as a life enrichment center, main floor town center with bistro-style or fine dining, pub, cinema, chapel, fitness center and gift shop as well as a community garden and 4,600-square-foot clubhouse with a game room, kitchen and lounge.

Larsen explained many of Lyngblomsten's services and amenities would also be available to nonresidents. Judd Fenlon with Grand Real Estate Advisors said Lyngblomsten's club house and programming would be open to non-residents.

Phase II is proposed to include a standalone 6,000-square-foot restaurant with an outdoor patio; Phase III will be for future commercial development.

“I think you get a sense that the Lyngblomsten's proposal kind of takes that vision (the master plan) and puts it into play,” said City Planner Katie Larsen. “The proposed project meets the goals, objectives and standards of the Comprehensive Plan and master plan. As we know, this is redevelopment of a city gateway. It will provide economic value and stimulus to that area as well as that social value, those amenities and services that other residents can utilize as well.”

Grochala explained the project would likely stimulate development on the east side of the project but could also be instrumental in keeping some much-needed Anoka County and Ramsey County road projects moving forward.

Planning and Zoning Commission members then asked a barrage of questions about access points, road improvements, traffic, project phasing, parks and trails, garage widths, trees/buffers and other screening, and the clubhouse.

Commissioner Neil Evenson asked, “Why Lino Lakes? What brought you here?” Fenlon responded, “Several years ago Lyngblomsten set out as a priority to look at if they should expand and do a second campus. We were focused on this general geography and reached out to the city when we saw the city owned some land close to where we are.” He added, “Our original efforts started with a 6-acre city-owned parcel (near City Hall) over a year ago ... that turned out not to be appropriate for that site, so we continued to work with staff. From our standpoint, this really represents a great opportunity for us to do a larger project.”

During the public hearing, three residents spoke. Dan Kvinge said, “I have lived here for 23 years, so I have watched this property over and over thinking we are going to get something going here,” he said. “I want to say I am really impressed. I don't have anything but praise to say. Finally, we have something that I think looks really good and I appreciate that.”

Kevin Sontag noted, “I have been in Lino Lakes for 25 years. It has been a great place to live. I am only going to talk about my property because it really only affects me,” he said. “The 50-foot easement (tree buffer along the western edge of the development), they have done a really good job on the property line, but it appears as it comes down the back of my property it goes from 50 to 25 (feet in width). I am concerned about that buffer.”

Larsen explained because of where Sontag's property is, the buffer would not make it to his property, but she said the city would work with Lyngblomsten to add in some additional screening such as a fence.

Resident Mike Witham said, “It seems like past projects have always been ones that have brought up things to push the boundaries with PUD’s. We have never wanted to be ones that seem to be the 'not in our backyard' group, but we also want to make sure they are meeting the development standards,'” he said. “It really feels like these developers have made a real effort to listen to our concerns and that they genuinely took a lot of our feedback into consideration, so we really appreciate that.”

Commissioner Jeremy Stimpson shared his opinion about the proposal. “I have looked at that corner for years, and this is about the least rigorous use that I could have imagined. Mike (Grochala) touched on the traffic and how little traffic there is surprisingly for developing an almost 20-acre site,” he said. “Lyngblomsten is about one of the best senior housing providers in the Midwest ... I think we are really lucky from a development standpoint to have somebody that is willing to listen that is bringing a development like this to Lino Lakes.”

Vice Chair Michael Root said, “This has been a great process. The developer has done a lot to work with the neighborhood to get the best project. Those of us who have been up here a while have seen a number of projects and other types of uses, and I think this is a great use for it.” He added, “We had a developer just before this that came through and was looking to develop the property for a similar use. Lyngblomsten must have listened to that meeting, because they went through and checked off all those boxes that we expressed concern on.”

Before recommending the council approve the project, Commissioner Perry Laden expressed his opinion on the master planning process. “One thing the master plan did for us is it gave us the teeth to tell the bad or undesirable projects ‘no, this does not work for our community,’” he said. “As we move forward, I would like to encourage the council and staff to look at other areas where we need master planning done, because I think that has been a real asset.”

“Lyngblomsten has been involved in this site for quite some time. The city and community have been great in giving us feedback on what the vision is,” Fenlon said. “I think we are very proud of that effort by all parties to develop the plan that we have in front of you today. A lot of time and effort has gone into this planning and we are excited to be a part of this community for the long term and bring a much-needed product and a senior housing campus to Lino Lakes.”

The commission unanimously approved the rezoning of the property, PUD stage plan, preliminary plat and a site plan review. Larsen said the City Council will discuss the topic at its March 4 work session, but likely will not take action on the item until sometime in April.