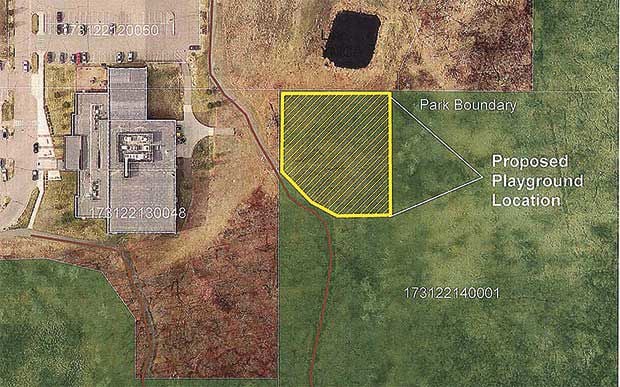 Woods Edge Park is an undeveloped neighborhood park adjacent to the YMCA in Lino Lakes. 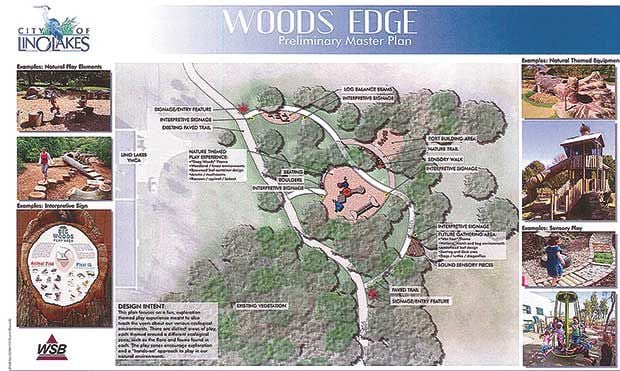 The Woods Edge Park Master Plan, which was drafted in 2017, calls for “a nature-themed play experience.”

Woods Edge Park is an undeveloped neighborhood park adjacent to the YMCA in Lino Lakes.

The Woods Edge Park Master Plan, which was drafted in 2017, calls for “a nature-themed play experience.”

LINO LAKES — The City Council has checked two more projects off of its long list of parks and trail capital projects.

Sunrise Park, located at 6918 Sunrise Drive, and Woods Edge Park, an undeveloped neighborhood park adjacent to the YMCA, are the next two parks the city plans to tackle.

The City Council approved a contract in the amount of $95,000 with Northland Recreation Inc. for new playground equipment at Sunrise Park at its Jan. 28 meeting.

“Sunrise Park is our largest, most heavily used park,” Public Services Director Rick DeGardner said. “We have four ball fields there, hockey rinks, host special events there like the Community Corn Roast … This is definitely a scenario where the city can get the most bang for its buck.”

DeGardner noted the playground was installed in 1998 and is need of replacement. The $95,000 includes design work, playground equipment, a concrete border, engineered wood fiber and the installation.

Northland Recreation will provide the design and equipment for the project through Sourcewell, a public corporation that serves as a municipal contracting agency for government and education agencies. (Sourcewell serves member agencies under the legislative authority established by Minnesota Statute 123A.21.)

The city utilized the same process to complete the playground project at Birch Park in 2018.

The project will either be installed this spring or next fall depending on if the city can find volunteers to help install the playground equipment. If the city is not able to find volunteers, either public services department staff will have to take it on or the city would have to pay Northland Recreation more money for the installation.

The City Council not only approved an amendment to a joint powers agreement (JPA) between the city and Anoka County for the development of Woods Edge Park, but also ordered the project, approved the plans and specifications and authorized advertisement of bids at its Jan. 28 meeting.

“This has been in the works for a long time,” Mayor Jeff Reinert said. “This is a good project. It is going to be a great addition to that area of town. In addition to those folks that go to the YMCA,  eventually as our Legacy at Woods Edge development finishes up, it will need a park.”

In 2006, the city and county entered into the JPA to construct and maintain the park trails within the Rice Creek Chain of Lakes Regional Park Reserve. The JPA amendment will allow the city to develop the park over county property located directly behind the YMCA.

DeGardner explained, “This park will create a more natural type of feel that aesthetically fits with the natural surroundings.” He said the city received $283,400 in dedicated park funds from the Woods Edge Development that can be used for the project.

According to the plan, there should be distinct areas of play, each themed around a different ecological zone, such as the flora and fauna. The play zones should also encourage exploration and a hands-on approach to play in natural environments.

“The residential development has accelerated, and there is more of a demand to get this park developed,” DeGardner said. “This is going to be a unique park; we don't have this type of park in our parks system, so we are excited to construct it and see how it turns out.”

The council is expected to award the construction contract for the project at its March 11 meeting, with substantial completion by the end of June 2019.