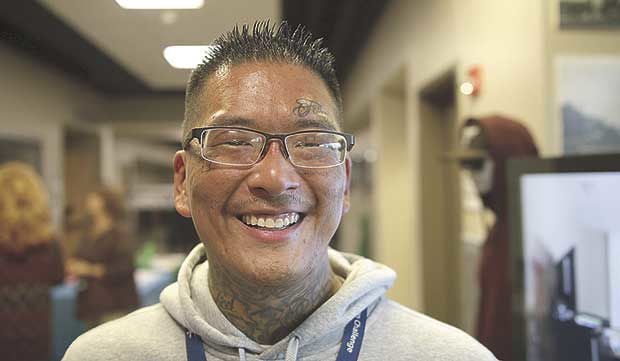 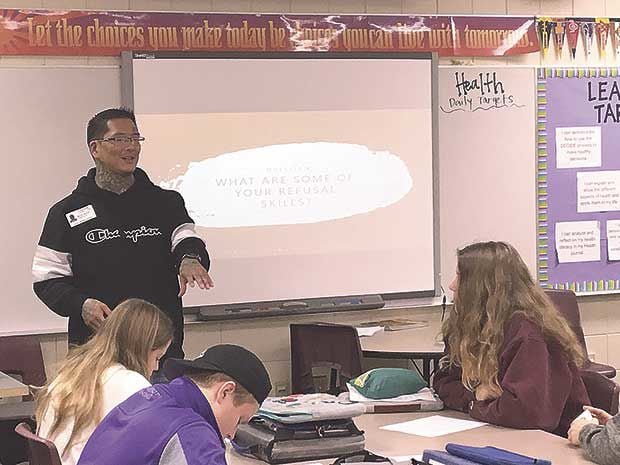 Students in grades 10-12 enrolled in the healthy living class at Centennial High School (CHS) learned Jan. 7 about the consequences they may face if they choose to say yes to drugs.

Presenters from Know the Truth (KTT) shared their stories. They also presented information concerning various topics, including marijuana, vaping, alcohol and prescription pills. KTT is a substance use prevention program that targets teenagers and reaches more than 58,000 students each year in over 160 high schools and middle schools throughout the state. The program uses a peer-to-peer format in which presenters share their personal stories and struggles with substance use, stripping away any glamour or myths that may exist.

“KTT does a great job with connecting with students and sharing real-life examples of what we talk about in class. It is a great opportunity for our students to ask KTT presenters questions, and to relate on current life stressors and questions they have,” said CHS physical education and health teacher Dave Frasier. “KTT is always top-notch and one of the students’ favorite days in the whole course.”

KTT lead presenter, 31-year-old Micah Meline, shared his story with the students. He is originally from South Korea, but he

was placed into the foster care system because his 14-year-old mother was not ready to care for a child. He was adopted by a nice Minnesota family but at a very early age already felt like he didn't fit in or belong.

At the age of 9, he started hanging out with 17-year-olds and smoking. “I wanted to be accepted,” he explained. By the age of 10, Meline was using marijuana daily. He started attending class high on drugs and skipping school, which strained his relationship with his family.

His 17-year-old girlfriend became pregnant, and he didn't graduate from high school. When he turned 18, he moved to Canada for a brief time to be with his girlfriend and child. To escape the scrutiny of his girlfriend and her mother and return to his old ways, he lied and said he had a job waiting for him back in Minnesota. “I started believing that I needed drugs more than my family,” he said.

He continued to experiment with drugs, including Xanax. He told a story about when he was pulled over and took police on a seven-mile, high-speed chase. He was arrested for fleeing a police officer and was cited for DUI. In addition to losing his license, Meline was not allowed to return to Canada due to his criminal record.

He told another story about a time when he was high. He became convinced that his mother was stealing from him and became very confrontational. His mother called the cops and he was charged with four felonies. “In that state I was in, I very well could have killed her. There was a firearm in the house,” he recalled. He was sent to prison for four years.

Eventually, Meline felt so hopeless about his situation that he tried to take his own life by driving into a bridge going 100 mph. Through the years, he has lost 23 friends to addiction. Meline graduated from the 13-month Teen Challenge program in August 2018 and now works full time as a lead presenter.

Following the presentation, students asked questions and took an anonymous survey about drug use. KTT uses the survey results to better understand what is going on at schools throughout the state. Meline encouraged students to contact the anonymous text hotline at 612-440-3967 if they need help.

“I believe it is important for students to hear from people who are just like them. Many of the speakers grew up around Centennial. Many are not the stereotypical addicts; they come from good families, (are) athletes, etc. and it just shows how addiction can affect anyone,” said CHS health teacher Amanda Daeger.

“I also think it's important to destigmatize addiction. These talks show students that there is a way out, and emphasize the importance of strong connections and friend groups. Our hope is that we can help students see the risk they take by starting.”