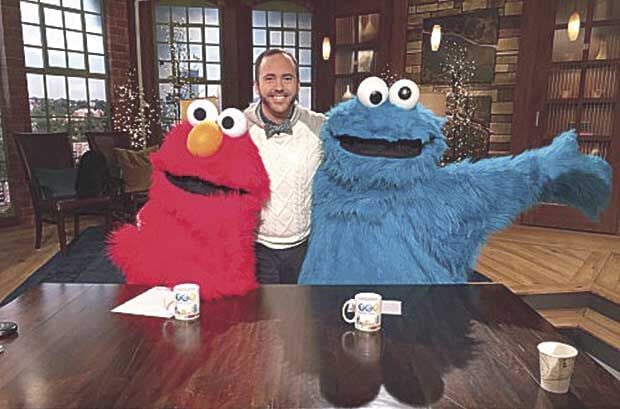 Centennial grad Mike Marcotte poses for a photo with Elmo and Cookie Monster during a show with Twin Cities Live.

Mike Marcotte has published a Minnesota Holiday Lights Display Guide on his website Give Me the Mike since 2017. This year’s guide features more than 150 listings. A map feature on his website allows people to specify the zip code in which they are interested or find out how many lights each display has.

Centennial grad Mike Marcotte poses for a photo with Elmo and Cookie Monster during a show with Twin Cities Live.

Mike Marcotte has published a Minnesota Holiday Lights Display Guide on his website Give Me the Mike since 2017. This year’s guide features more than 150 listings. A map feature on his website allows people to specify the zip code in which they are interested or find out how many lights each display has.

Marcotte, a resident of Minneapolis, graduated from Centennial High School (CHS) in 2004. He started a website called Give Me the Mike in May 2017 as a hobby. “The website is just an outlet for me to get this information out of my brain,” he explained. “It is a way to push some stuff out there that I think people will be able to use and enjoy.”

After Marcotte graduated from CHS, he attended Gustavus Adolphus College to major in elementary education. While in college, he had a part-time job with Channel 5 as an events staffer. He graduated from college in 2008 but was unable to find a job right away. He ended up working an interim position in student activities at Gustavus for a while and later got a marketing position with Big Brothers Big Sisters of America.

In 2011, Channel 5 offered Marcotte an assistant producer position for Twin Cities Live. “I had no producing or on-air experience,” he recalled. Marcotte worked for Twin Cities Live for nearly nine years but took off that hat in April. He now works as an events manager full time.

Marcotte has never had just one gig. At any given time, he has always had several things going on. Perhaps one of the more unique jobs he has had is as a Guinness World Records adjudicator. For the past three years, Marcotte has traveled around the U.S. and Canada to determine whether a record has been broken. Of course, all of that is now being done remotely. So far, he has been involved in verifying about 30 attempts to break records throughout North America.

Give Me the Mike

One of the most popular features of Marcotte’s website is the Minnesota Holiday Lights Display Guide, which he has done every year since the website launched 3 1/2 years ago.

“The whole reason this guide started in the first place was because there was a void when it came to a listing of (holiday light) displays around the state,” he recalled. “I do it as a resource for people. It is fun to see people be able to take something away from it.”

As of press deadline, the guide had around 150 listings, compared to 55 in 2019. “This year, obviously it is a whole different beast. It has been blowing up,” he said. “It just continues to grow. People keep hearing about it.”

When Marcotte began his holiday lighting list, he drove around and searched social media to locate significant displays. This year, people are sending in submissions. Marcotte says he does have some minimum criteria that light displays must meet in order to be listed in the guide. Those requirements are not spublished anywhere so as not to stifle creativity.

The guide has a map feature that allows people to specify the zip code in which they are interested or find out how many lights each display has.

Marcotte’s website also features several Best of Minnesota Guides, including best pizzerias, best coffee shops, best bakeries, best patios, best fireworks and more. Marcotte, a self-described “fair fanatic,” also generates a lot of website traffic for his State Fair coverage, everything from how to get there, how to get around, best days to go and — of course — the best food. Another popular resource is an article listing birthday freebies.

For the Minnesota Holiday Lights Display Guide, or to check out Marcotte’s website, visit givemethemike.com.