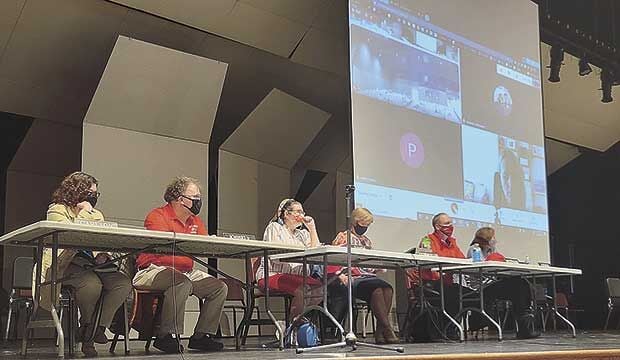 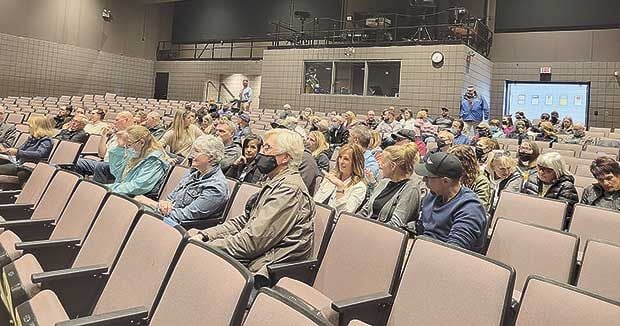 So many people showed up to the Centennial School Board meeting last week, the meeting had to be moved from the District Center to the Performing Arts Center.

A group of about 80 people attended the May 10 meeting, many of them, to voice their displeasure with the joint powers agreement (JPA) and contract with Equity Alliance MN (EA-MN) on which the district was scheduled to vote.

After a nearly 15-minute delay so microphones and technology could be set up, School Board Chair Suzy Guthmueller reminded everyone in the audience that it was the law to wear masks indoors, but she was quickly interrupted by booing and shouting.

Guthmueller offered a motion to amend the agenda to move the EA-MN JPA from an action item to a discussion item. The board then opened up the public forum. Those who wished to speak during the public forum were asked to sign up and provide a full name and address before addressing the board and abide by several rules, but not every speaker complied with those requirements.

Eighteen people spoke during the public forum, which lasted for 45 minutes. First up was state Rep. Donald Raleigh (District 38). He said there were parts of the contract that he was concerned about and wanted to draw attention to.

“If you take a look at the contract language that is in the proposal, Article 8, which is the powers area, it says that the board will be vested with all of those powers granted to independent school districts by Minnesota statute,” Raleigh said. “And this is the important part, ‘the powers of the board shall include, but not be limited to’… Any time you have got contractual language that says ‘not limited to,’ we need to take a look at what the enumerations of those powers are …”

Raleigh referenced Cruz-Guzman v. State of Minnesota, an ongoing lawsuit that stems back to 2015 when seven families and one nonprofit organization sued the state of Minnesota on behalf of children/families in the Saint Paul and Minneapolis school districts. The suit asserts that segregation in those districts has maintained an unfair and substandard educational environment for minority students.

“I would ask the board, as you are contemplating getting into contract like this, number one, are you allocating powers that should be reserved to the board itself? And secondly, making sure you take a look at the language of the contract, so that we as a community, don’t get into yet another lawsuit,” Raleigh said.

Former state Rep. Linda Runbeck shared her thoughts. “America was on its way to becoming a colorblind society, and all of a sudden critical race theory started creeping into our culture, really coming from academia,” she said. “You say we are not talking about critical race theory here tonight, but we need to be asking what it is, because Centennial Schools, if it does enter the contract with EA-MN, is going to find out the hard way. There is nothing good that comes from EA-MN, which is a truly biased and political organization.”

Lino Lakes resident Cori Duffy questioned EA-MN’s Executive Director Sebastian Witherspoon’s political agenda. “I’m very concerned that the students, the teachers, everybody in this community is going to be shamed, bullied, their voices not heard. Only his and his group’s voice is going to be heard and nobody else,” she said. “All it does is create division. These people come in here, say they are going to bring people together, heal the racial divisions — and it ends up being the opposite of that.”

Benjamin Jaffe-Talberg, a 2002 Centennial grad, told the board about a petition he created to address racial inequity at Centennial High School, which had 343 signatures as of press deadline. “Reflecting on my experience as a student, I recall the usage of racial stereotypes, microaggressions and racially insensitive language in the hallways. I remember occasions in which teachers used insensitive materials and instruction in the classroom, and I remember the ways administrators were unprepared to create an inclusive environment,” he said. “One especially outrageous example I recall was the principal of my class offering an Indian American student an African American Student of the Year award. This demonstrates to me the deep lack of racial awareness and sensitivity at the highest levels of leadership at the school when I was a student.”

Retired school board member John Burns asked Superintendent Brian Dietz about the motivation behind the program. “Did the school board poll the students, parents, to see if this is really wanted or warranted? What is the percent of diversity in our school? If I recall it’s very small …” he said. “It just doesn’t seem right to spend that kind of money on a program like this. I can’t stand behind this program. I’m here to support neighbors. Somebody has to take a stand, and many people have.”

Heather Berg-Patel, an alumna of the district, said she has two children of color who are currently enrolled in the district and who have experienced racism since elementary school. “Part of the reason it is an important issue is because there are a small number of students of color that are going uncared for and unsupported. I don’t think that means that we shouldn’t do this, because they are less than 20% (of the student population); I think that is the absolute reason we should do this,” she said.

Several audience members shouted out while Berg-Patel was trying to speak. She added, “I think that having an equity coordinator would be helpful, because our staff is also all white. How do we address issues of race if we don’t have diversity? I support hiring them and an equity coordinator. There is a lot more people like me that are afraid to speak up because of bullies.”

Several parents had questions about how much the partnership would cost the district. Dietz said it would cost $5/per student to be a member of EA-MN, which would equate to roughly $32,000. In addition, there would be several items the district would need to pay for the first year of membership as well as some recurring costs annually. According to the cost breakdown in the school board packet, the district’s bill (depending on services selected) could be as much as $125,000; second-year costs could amount to $38,500.

“Our goal is to continue to make sure that we create a positive environment for all students. For the existence of our district, it’s always been about how do we get better each and every day and support our learners in our schools,” Dietz said. “We want to get feedback on what are our strengths, what are the opportunities that we have, and how do we get better to ensure that all of our students are supported in the work they are doing.”

Witherspoon then gave a presentation on EA-MN. According to the organization’s website, EA-MN works with organizations to support systemic equity and integration through careful and intentional use of professional development; external supports, including equity audits, facilitation and action planning; and student programming. The organization, which was formerly known as the East Metro Integration District (EMID), has been around since 1995.

Centennial Schools has worked with EA-MN, although not as a member, for the past three years since it adopted its strategic plan in 2016.

Throughout Witherspoon’s presentation, there were many contributions from the audience, including questions, commentary and an occasional profanity. At one point, Guthmueller called a recess because of the interruptions, but audience commentary continued.

Guthmueller said, “We are listening to Sebastian give us some information on something we felt would be good for the district. What we have heard tonight is that you are not interested in this program,” she said. “This is in a pause at this point for more conversation. We are going to listen to you. We are all going to be a part of this conversation, but you need to let us do our work without interrupting and not be disrespectful … I can tell you every single person on this board here tonight cares about your students.”

The next school board meeting will be held at 6:30 p.m. Monday, June 7. It is unclear whether this topic will be on the agenda.