Birch Street is scheduled to be reconstructed to address corridor needs by improving mobility and safety along the segment. Multiple design options were considered during the planning process. A divided two-lane roadway with roundabouts, center median and access controls is deemed to be the most safe, efficient and cost-effective option. Currently about 12,000 vehicles use this segment, which is expected to grow to 14,0000 by 2040. 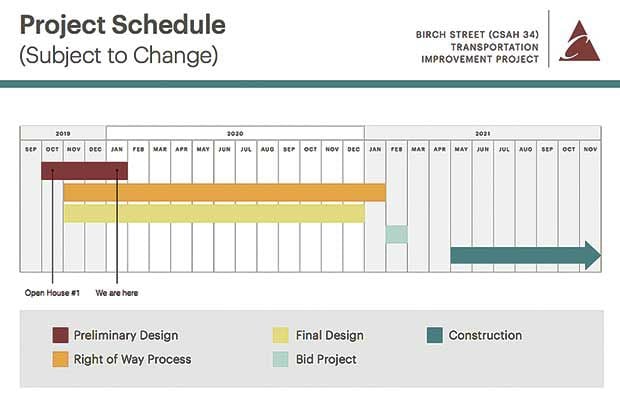 This chart depicts the timeline for the Birch Street improvements. Construction is slated to begin in 2021.

Birch Street is scheduled to be reconstructed to address corridor needs by improving mobility and safety along the segment. Multiple design options were considered during the planning process. A divided two-lane roadway with roundabouts, center median and access controls is deemed to be the most safe, efficient and cost-effective option. Currently about 12,000 vehicles use this segment, which is expected to grow to 14,0000 by 2040.

This chart depicts the timeline for the Birch Street improvements. Construction is slated to begin in 2021.

“I think it (the open house) went really well. I think the public had time to digest the information that was shared at the first open house and then we were able to respond and provide comments and answers to a lot of the questions that came up,” said Transportation Division Manager/County Engineer Joe MacPherson. “I think overall, a lot of residents understood a little more. We provided more information regarding how we got to this point, why we think it is a valid alternative to consider roundabouts versus signals. The residents understand the safety benefits of a roundabout.”

The first option is the one that the county revealed at the first open house (roundabouts at West Shadow Lake Drive and Tomahawk Trail). The second option was the proposal discussed in December that incorporates three roundabouts (West Shadow Lake Drive, Tomahawk Trail and Old Birch Street). The third option, which MacPherson said is the one the county is leaning toward right now, includes roundabouts

MacPherson said one thing was clear from this open house: residents want to see safety improvements made along the corridor, but they may disagree on how to achieve that. The county received positive and negative comments on all three options but, in general, a lot of residents didn’t care for the first option discussed at the first open house.

“There was no way for residents on either side of that median to make a safe U-turn to go back the other direction,” MacPherson explained. “We did provide some left-turn lanes along the median, but it would be really difficult to provide every single staggered access a left turn just because of the way the accesses exist today: they don’t line up with each other.”

A lot of residents wanted to understand how roundabouts work and had specific questions about how they would impact their travel, MacPherson said. The county plans to beef up the information it has available about roundabouts on its website.

“Anoka County has always been cognizant of the fact that we are not in a box here. When we design projects, it affects everyone that uses the road, so we want to know what the opinions are, what the concerns are, what people’s comfort level is with the particular alternative,” MacPherson said. “These open houses really provide us an opportunity to get feedback from public and to give good information to the public so they are not hearing it second hand.”

City Council members asked questions about the project and weighed in the options at the Feb. 3 work session. Mayor Rob Rafferty said he is not convinced that the county should pursue the three-roundabout option. “At the end of the day, we are trying to solve a problem for the residents. Safety is first, that is key,” he said. “We have to do our best to come up with solutions that we can all work with.”

The council is supportive of improvements to Birch Street but has not yet determined which option it would like to see implemented. Council members requested some additional cost information for each of the options and will discuss the topic again at their March work session. The county will continue with the design process and start to finalize plans, right of way acquisitions and permitting. The plan is still on schedule to begin construction in spring 2021.