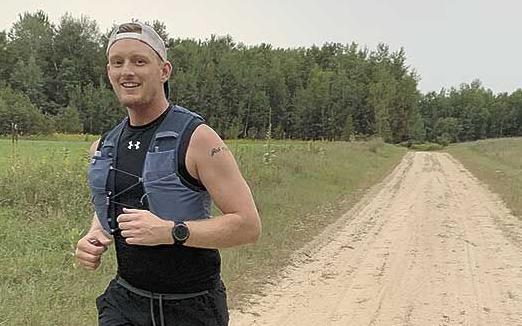 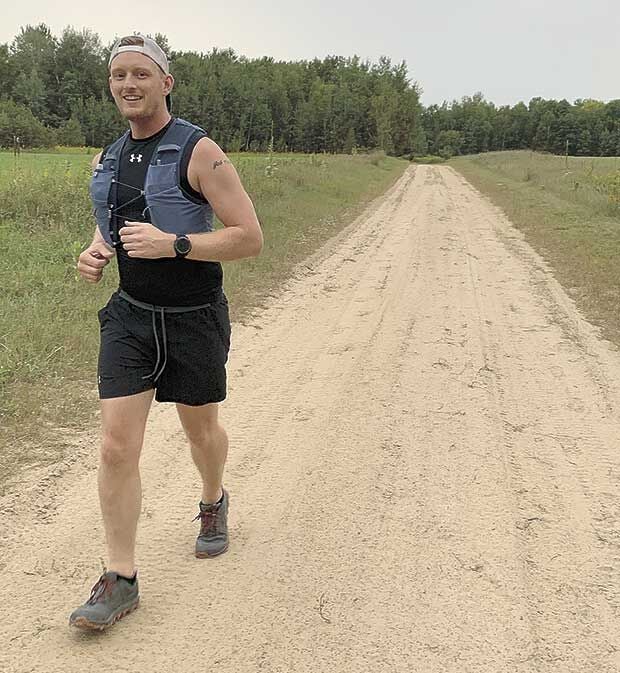 Later this week, a local veteran will lace up his running shoes and attempt to do the nearly impossible — all in hopes of spurring conversations and raising awareness of veteran suicide.

Forest Lake native Caleb Wedger served in the Minnesota Air National Guard for nine years. In 2012, he was deployed for six months. He spent half of his time in Kuwait and the other half in Afghanistan. Two weeks before he left for basic training, his father took his own life.

About a year ago, Wedger stumbled across a video on YouTube of Gov. Walz giving a press conference about veteran suicide and the fact that on average, 100 veterans take their lives each year in Minnesota.

“For whatever reason, that really grabbed my heart,” Wedger explained.

At the same time, Wedger was reading a book by David Goggins called “Can’t Hurt Me,” in which Goggins shares his life story and illuminates a path that anyone can take to push past the pain, demolish fear and reach their full potential. Goggins, a veteran, runs ultramarathons for charitable causes.

“That’s where 100 is TOO MANY was born, and I’ve been able to gain support and traction through local communities to pull it off,” Wedger said.

The first Saturday of October is recognized as Veterans Suicide Prevention & Awareness Day in Minnesota. On Friday, Oct. 1, there will be an opening ceremony at Lakeside Memorial Park in Forest Lake. Wedger will begin his run north along the trail on Highway 61 to North Branch and then turn around to head back toward Hugo.

It’s all in an effort to not only start a conversation about veteran suicide and the importance of mental health, but to raise money for the Freedom Fishing Foundation, a nonprofit organization whose mission is to help military and veteran families live healthier and more fulfilling lives. That happens through fishing trips.

“The reason I chose them was because I truly believe that they, and organizations like them, are in my opinion doing the hard work of keeping people out of that downward spiral that leads to mental health issues, in a lot of ways (accomplishing that) through connectivity and community,” Wedger explained.

“Our fishing trips connect vets with other vets and with nature. We believe it is important to encourage healthy activity and connection,” said Freedom Fishing Foundation President Ben Enfelt. “Caleb believes that true help for vets will come through building community, and that’s what we’re trying to do … Through putting this event together, we’ve seen so many people step up to make a difference. Raising awareness to veteran suicide was part of the goal for this event and that mission has already been accomplished.”

Wedger has been training for the big day since last October. Fun fact — he absolutely loathes running. The longest Wedger has run to date is 18 miles. “This just gives me an excuse to do something crazy,” he said. “I have no idea if I can do it or not. Statistically, and if you talk to the pros, I can’t, but this really is the ultimate ‘If you put your mind to it, you can do it.’”

Now, more than ever, Wedger feels this is a conversation that needs to be held. He believes we all have our own unique role to play.

“I'm so grateful for everyone that is helping you spread the word and the message. I think our current environment is exposing a weakness that we all ultimately play a role in fixing. Especially as leaders, we can do way more than we maybe think we can,” he said. “COVID has exposed in a big way that we could all use more connectivity, that these devices that are claiming to bring us together in all of these ways are sending us on a speeding bullet in the opposite direction.”

Community members are encouraged to write messages to Wedger along the trail and come out and cheer him on along his route. Wedger’s goal is to raise $100 per mile for a total of $10,000 for Freedom Fishing Foundation. Donations can be made online at https://freedomfishingfoundation.com. There, you can also sign up to cheer on Caleb in Forest Lake, Hugo or North Branch. You can also purchase apparel. Both Freedom Fishing’s Facebook page and Wedger’s Instagram (100toomany) will have live updates of his progress.

“It is going to be an adventure. I don't know the outcome. I'm perfectly okay with that,” Wedger said.

70.7 percent of male veteran suicide deaths were from firearms in 2017

43.2 percent of female veteran suicide deaths were from firearms in 2017

919: The number of suicides among never federally activated former National Guard and Reserve members in 2017 (average of 2.5 suicide deaths per day)

Details: The opening ceremony will feature the Forest Lake American Legion Color Guard, remarks from special guests and the start of the 100 is TOO Many run.

Details: Join us for a mental health expo for education and resources. The Legion will also host a breakfast from 8-9 a.m.

Details: Caleb will likely arrive in Hugo around 9 p.m. Friday evening. Before that, community members are invited to a barbecue and ice cream social hosted by Encore and Chef Hot Hands.

•Make the Connection: This online resource connects veterans, their families and friends with information on suicide symptoms and conditions. https://www.maketheconnection.net