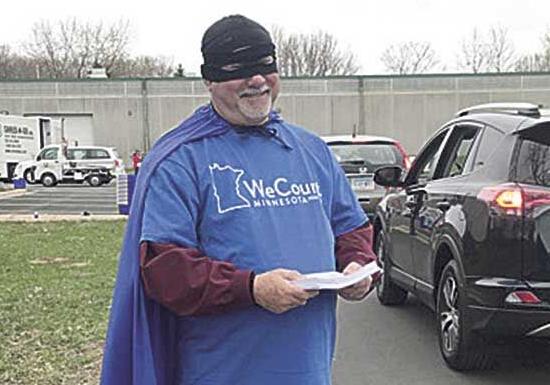 Census Man, aka Circle Pines City Council Member Dean Goldberg, attends a citywide recycling day to inform residents about the importance of being counted for the 2020 Census.

This chart compares the 2010 Census results to the 2020 Census results for Anoka County as a whole, as well as the cities of: Lino Lakes, Lexington, Circle Pines and Centerville.

Census Man, aka Circle Pines City Council Member Dean Goldberg, attends a citywide recycling day to inform residents about the importance of being counted for the 2020 Census.

This chart compares the 2010 Census results to the 2020 Census results for Anoka County as a whole, as well as the cities of: Lino Lakes, Lexington, Circle Pines and Centerville.

If 25 fewer people would have been counted in the Circle Pines’ 2020 Census, the city would have had a lot to lose.

In the 2010 Census, Circle Pines had a population of 4,918. Subsequently, it just missed out on the 5,000 count it needed to qualify for approximately $150,000 a year in state aid funding. Circle Pines was granted an unusual legislative exemption to be treated as a city of more than 5,000, but it was uncertain if it would have been able to secure that exemption again.

“It’s one thing to hit the 5,000 mark and get state aid funding for streets, but it is a whole other thing when you look at this as an example of a community working and trying to come together,” Mayor Dave Bartholomay said. “It was a great community ‘coming together’ event.”

This time around, Circle Pines’ population was counted as 5,025. Lino Lakes’ count came in at 21,399, Centerville’s at 3,896, and Lexington’s at 2,248. City Administrator Patrick Antonen explained that Lexington’s count is not accurate, as it doesn’t account for many of the apartments that have come online in the past year or so, and the units that are currently under construction.

The committee was tasked with brainstorming and implementing ideas to engage the residents of Circle Pines and educate them on the importance of filling out the census. One of the committee’s main areas of focus was trying to reach the “hard-to-count” category, which includes those who reside in rental housing or multiunit housing and residents who have moved from another residence within the last year. In 2019, the Complete Count Committee completed 25 activities to raise community awareness; in 2020, there were 38 before the pandemic shut everything down.

Perhaps the most well-known meme that came out of the city’s efforts was Census Man (aka Goldberg). In addition to a lot of local media attention, Census Man had more than 6 million views across the nation after he appeared on HBO’s “Last Week Tonight with John Oliver.”

“Census Man created awareness of the census and our city, and it turned the census into a fun thing for a lot of people,” Goldberg recalled.

In addition to state aid funding, census numbers also determine how much Local Government Aid (LGA) and community education funding the city/school district receives. The census also determines the number of seats each state has in the U.S. House of Representatives, which is made up of 435 people. Minnesota was one of nine states that was projected to lose a seat because its population was not growing as fast as other states such as Texas, Arizona, Colorado, California and Montana.

“You (Circle Pines) hit your mark by 25, and we as a state hit our mark by 26. It was a close victory,” said Director of Census Operations and Engagement Andrew Virden. “Minnesota held onto its eighth congressional seat by 26 people. If New York had counted 91 more people, or we had counted 26 less, we would have lost our congressional seat for the first time in over 100 years.”

Everyone thanked Goldberg for his efforts. Goldberg simply said, “It took a village to get the census done very well in Circle Pines.”

Maybee said he was appreciative of the creativity that came about as part of the Complete Count Committee, and said the city will have to keep its changing demographics in mind going forward. “It feels good to know that we are going to have resources that are appropriate to our changing community,” the pastor said. “As we are changing in a lot of different ways, I think we need to be mindful and thoughtful with the ways we adapt to everything.”

“We are a changing community,” Goldberg said.

Thanks census man for making us all aware of the need to pay attention to this. Thanks for all of your contributions to our city as well since you are now also on the council.yay!