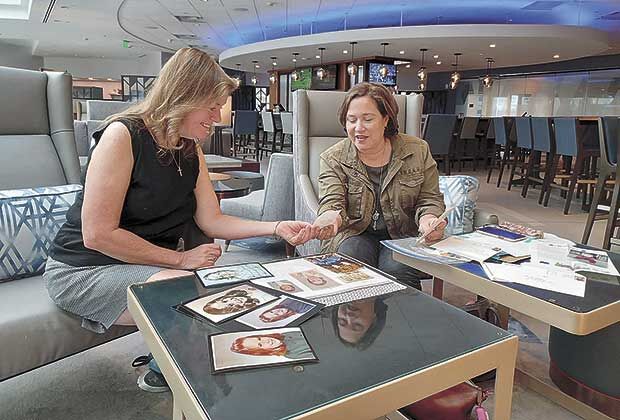 Carla Heck and Mildred Rivera Severseike look back at pictures they have mailed each other throughout the relationship. The two recently met for the first time in person, after communicating via letters for nearly 50 years. 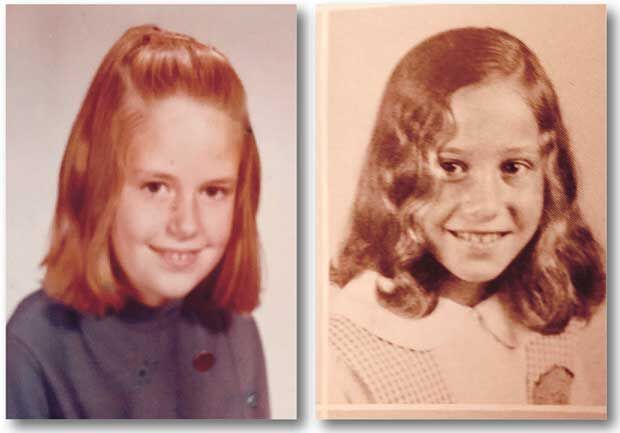 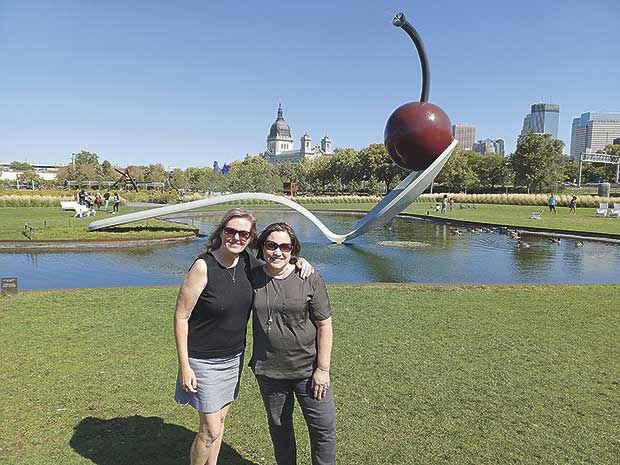 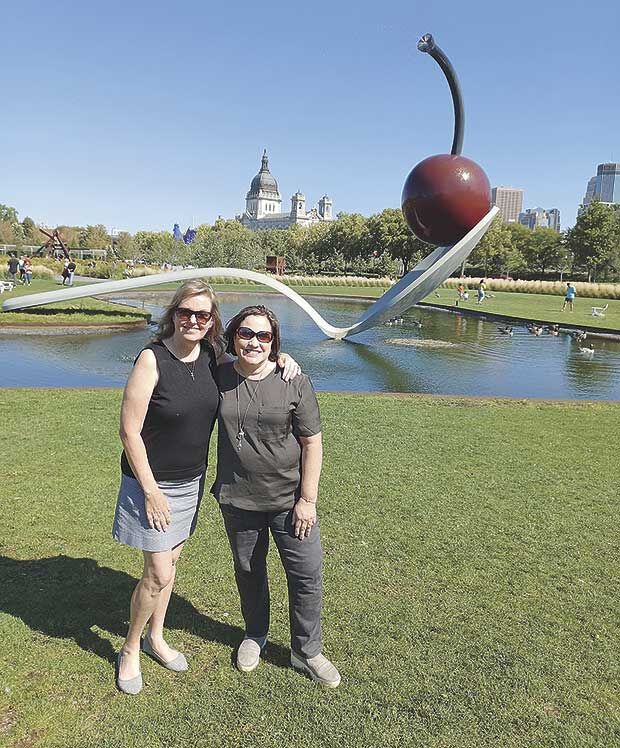 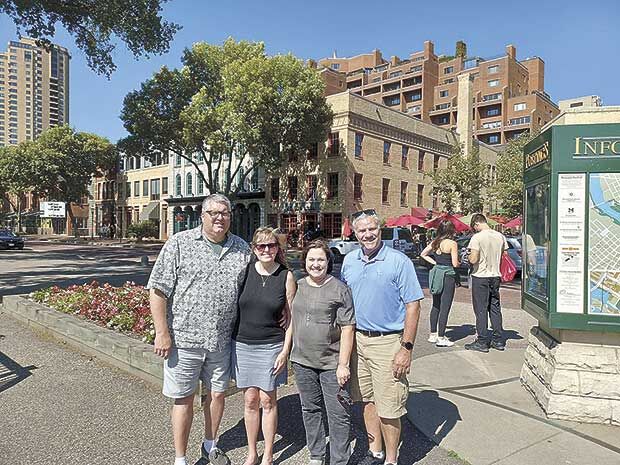 Carla Heck and Mildred Rivera Severseike’s husbands (Larry and Jeff) tagged along for the fun too. 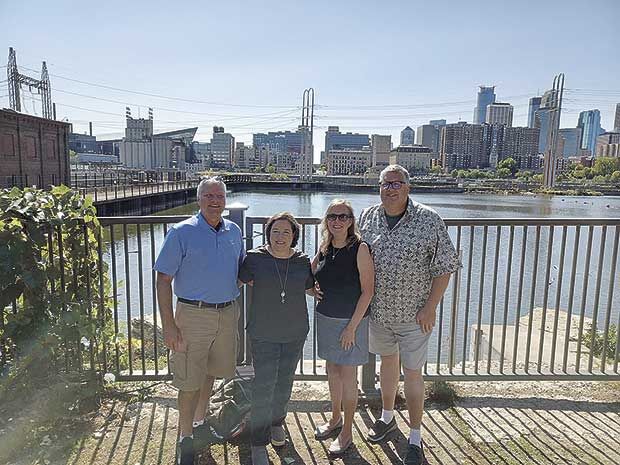 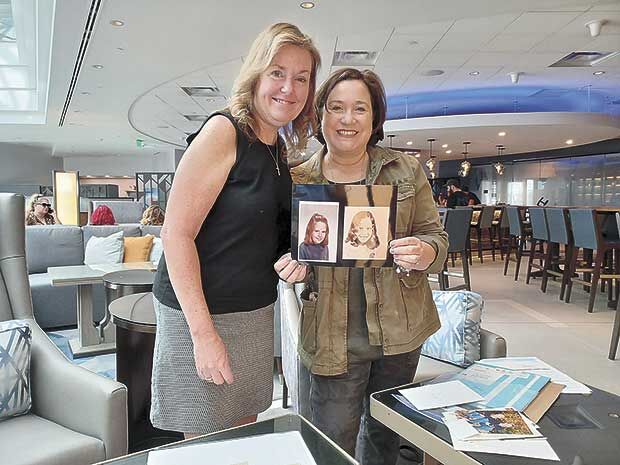 Carla Heck and Mildred Rivera Severseike look back at pictures they have mailed each other throughout the relationship. The two recently met for the first time in person, after communicating via letters for nearly 50 years.

Carla Heck and Mildred Rivera Severseike’s husbands (Larry and Jeff) tagged along for the fun too.

Circle Pines resident Mildred Rivera Severseike finally got to meet her pen pal. She’s been writing to her since she was in the fourth grade — almost 50 years ago.

Severseike was born and raised in Guaynabo, Puerto Rico. While in elementary school, her fourth grade teacher was friends with a fourth grade teacher in Michigan, and the two decided to do an exchange of names. Each student was paired with a student in the other teacher’s class.

“At my school they were teaching us English, so part of the reason we were doing this pen pal thing was to practice our grammar and our English in letter writing and also to learn from another culture,” Severseike explained.

She was paired with Carla Heck from Pleasant Lake, Michigan. The two started writing letters in the early ’70s. In the beginning of the relationship they wrote back-and-forth frequently.

“It was fun to write to someone and find out about each other,” Severseike said. “In the beginning, it was more about learning each other's cultures and learning about what life was like over there and over here, whereas later it was more of ‘What are you doing now? How's your family? What's the new thing that happened in your life this year?’”

She added, “Kudos to teachers. Teachers do things that impact students for the rest of their lives … It is nice to see friendship and positivity in this world. I learned about another culture. I practiced my English. I made a friend. These are all good things.”

Heck said, “I loved learning about Puerto Rico and her culture, that was added bonus. It was a way to learn something about another part of the country that we had no idea about.”

Throughout their high school and college years, the communication became less frequent as their lives got busier. They never lost contact with each other and always made sure to exchange addresses any time they moved.

Heck recalled living in Mexico for a few years, and Severseike happened to save one of Heck’s letters from that time. Severseike also held onto letters over the years that had important milestones in them, like one where Heck shared the news that she was expecting a baby.

Severseike eventually moved to the U.S. to attend Washington University in St. Louis, Missouri.  There she met her husband, Jeff, who was from Minnesota.

Both women got married shortly after college and started to have families of their own. For the past decade or so the two have mainly kept in contact via handwritten Christmas letters and photographs with yearly updates.

As technology evolved and connecting became easier with the advent to email, text messages and social media, the two preferred to keep communicating via letters.

“When you write a letter, your handwriting is part of you. It’s so personal. I enjoy writing … When I really want to express my heart, I handwrite because I feel like that’s me,” Severseike explained. “There is nothing like new stationery, a new pen and writing your thoughts out to a friend.”

Heck added, “It takes the right kind of people. You need to be a person that is committed to the other person in kind of a unique way … You have to value it.”

The thought of meeting in person has always been in the back of both of their minds. In fact, several years ago, Severseike sent a newspaper article to Heck about two longtime pen pals who were finally able to meet in person. Severseike said, “Maybe this will be us someday.”

Around five months ago, Heck contacted Severseike via text message and informed her that she was planning a fall trip to Chicago and was thinking about making a stop in Minneapolis. On Sept. 18, they met each other for the first time in a hotel lobby in Minneapolis.

“I was so nervous,” Severseike recalled. “I told my husband on the way there, ‘I feel like I’m going on a first date or something.’” After a long embrace, the two sat down, in the company of their husbands, Jeff and Larry, and reminisced about the long friendship and looked at old letters and photos they had sent each other over the years.

After that, the Severseikes took the Hecks on a tour of Minneapolis. They visited the Sculpture Garden, Basilica of St. Mary, Saint Anthony Falls, Stone Arch Bridge and Minnehaha Falls, all while teaching them some history of Minnesota.

“We were being ourselves; it didn't feel uptight at all. It felt like we were really both interested in each other, and we were just amazed at the similarities that our lives have had,” Severseike said. “I guess the teachers did a good pairing.”

Heck added, “We both grew to be the same type of person. We have the same family and faith values, we are both down-to-earth. We always focus on looking at the best side of any situation.” Jeff and Larry also got along really well and enjoyed the experience.

“It felt so warm and wonderful. It was such a perfect day,” Heck said.

When asked why it took so many years to meet each other in person, Severseike said they were both so busy with their own lives and focused on raising their children. Now that their children are grown, their schedules are a bit more flexible these days.

It will not take another 50 years for them to meet for a second time.

“We are going to see each other again,” Severseike said.

Until next time, they will stay connected via their yearly Christmas letters and perhaps try out FaceTime or Zoom.