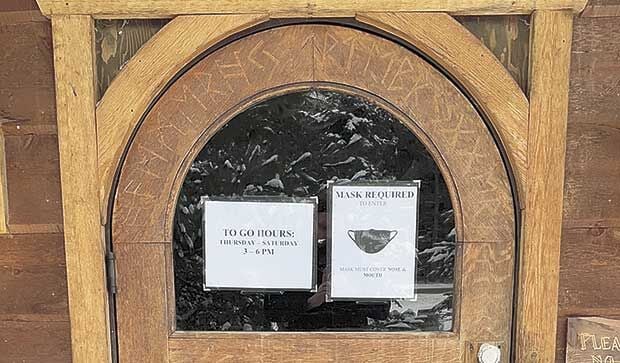 Breweries in Minnesota are weathering their second shutdown. Many of them are now open for to-go orders only 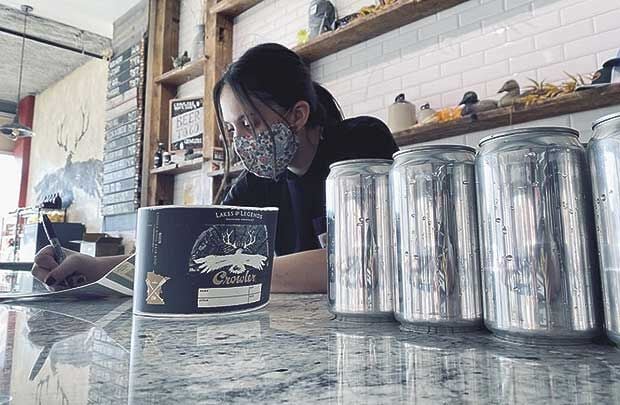 Breweries in Minnesota are weathering their second shutdown. Many of them are now open for to-go orders only. 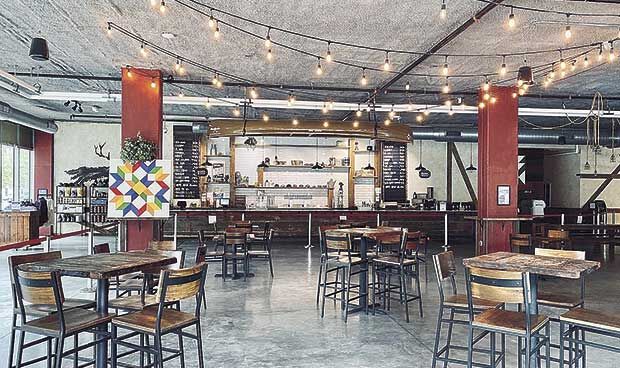 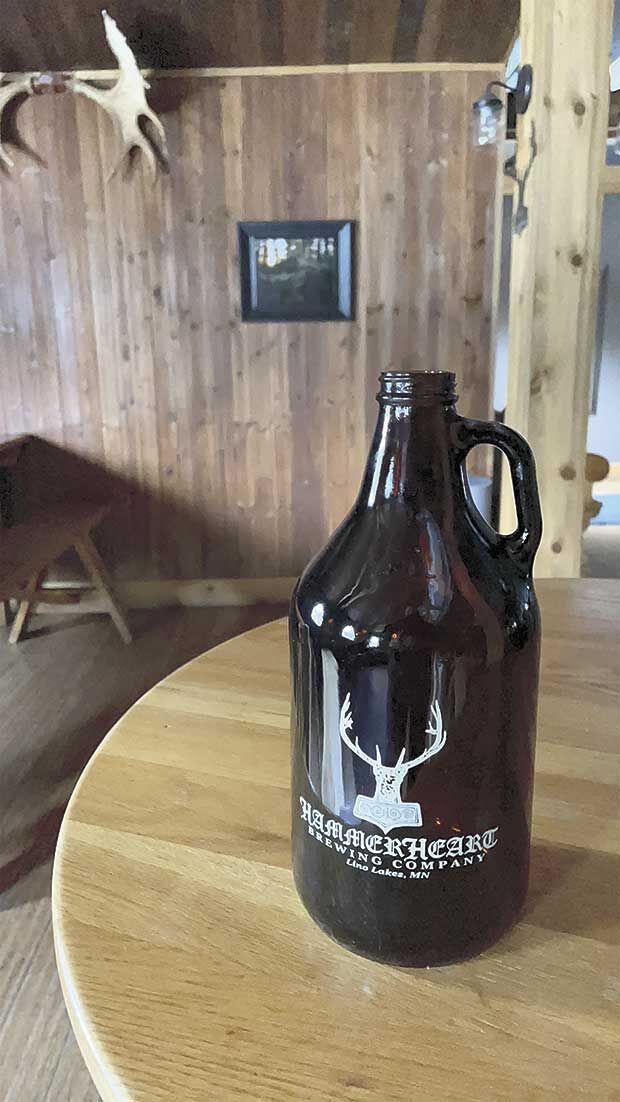 HammerHeart Brewing Company co-owner Nathaniel Chapman says the business is losing over 50% of its profit every week. 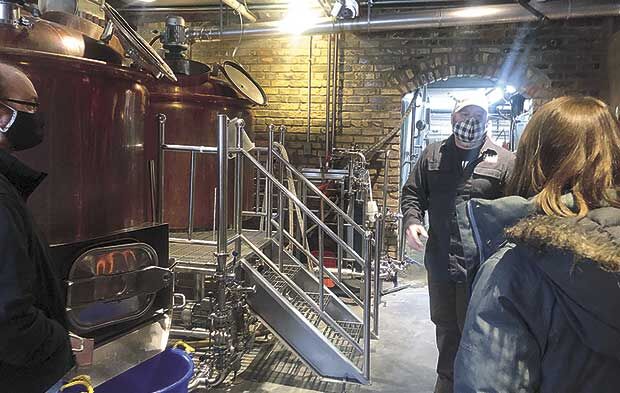 Ty McBee of Big Wood Brewery gives State Representative Ami Wazlawik a tour of the brewing facilities. The White Bear Lake craft brewery hosted local legislatives for a discussion on how the COVID-19 crisis and extended shutdown has affected its business.

Breweries in Minnesota are weathering their second shutdown. Many of them are now open for to-go orders only

Breweries in Minnesota are weathering their second shutdown. Many of them are now open for to-go orders only.

HammerHeart Brewing Company co-owner Nathaniel Chapman says the business is losing over 50% of its profit every week.

Ty McBee of Big Wood Brewery gives State Representative Ami Wazlawik a tour of the brewing facilities. The White Bear Lake craft brewery hosted local legislatives for a discussion on how the COVID-19 crisis and extended shutdown has affected its business.

If it wasn’t for government funding, customer support and the innovation of business owners, several more breweries would have closed their doors since the pandemic began.

Breweries are now weathering their second shutdown. The first shutdown began last year on March 17 and lasted 2 1/2 months. From June 10 until the second shutdown, which began Nov. 21, breweries were allowed to operate at 50% capacity indoors and had to adhere to a long list of guidelines. On Dec. 18 Gov. Walz revised the executive order to prohibit indoor dining but allow breweries to serve patrons outdoors. The executive order is effective through Sunday, Jan. 10. Restrictions may be dialed back at that time or remain in place.

Press Publications spoke to the owners of HammerHeart Brewing Co. in Lino Lakes, Lakes & Legends Brewing Company in Minneapolis and Big Wood Brewery in White Bear Lake to learn more about how the pandemic has impacted the industry.

HammerHeart Brewing Co. has been around since August 2013. Co-owner Nathaniel Chapman said that from the very beginning of the pandemic, his business chose to be cautious.

“If there was a recommendation to do something, even before it was mandated, we did it,” he explained. “Once the first shutdown happened, that’s when we just settled into the new normal.”

Throughout the entire pandemic, Chapman said the guidance the business has received from the state has been “straightforward.”

“We always agreed with the guidance,” he noted. “At any point, we have never had qualms with it.

“The whole thing has been frustrating, but we agreed with it so we never had issues navigating what we could or couldn’t do, because we always erred on the side of caution,” he said. “We were never trying to push the boundaries of the gray areas.”

Out of all the different phases, Chapman said operating indoor service at 50% capacity was the toughest. Although a majority of customers were understanding of the protocols in place, it was evident that a select few customers were frustrated with the guidelines.

“As a brewery, our number one goal is to make people feel welcome and comfortable, and by default we weren’t able to do that … It took a toll on our staff.”

Chapman said if it wasn’t for government funding — both a Paycheck Protection Program (PPP) loan and a grant from Anoka County — his business would not be open. The funding has allowed the brewery to keep its full-time staff. He said it is crucial that his business receives a second round of support from the government.

“I absolutely have to get those. If I don’t, it really puts me at risk. We are losing over 50% of our profit every week,” he said. “Over the course of the last nine months, that’s a ton of change that we have lost.”

HammerHeart is currently open for to-go orders only, as well as merchandise and gift cards. Visit hammerheartbrewing.com for more information.

“We have had a lot of people coming out. People have been super supportive,” Chapman said.

Immediately after the first shutdown, the business saw a dramatic decline in revenue. “Tuesday is usually our best day of the typical work week, and we have made probably 20% of what we typically make on a Tuesday. That was just a sharp decline in revenue, and then it just continued from there,” Taylor recalled.

The business is down over 60% in taproom revenue and down 25% in distribution (to other bars, restaurants, liquor stores).

Taylor said it has been challenging to try to plan for 2021 and beyond. “It is difficult to try to predict what is going to come up ahead of us,” he explained. “It is tough to plan on what we can and cannot do, not only the fun stuff like marketing and releasing new beers and products, but the financial planning is so difficult … It is really difficult to see the future and make decisions.”

The other side Taylor needs to think about is the people, both his staff and his customers. “I use the term ‘space and grace’ around here quite a bit. I ask my team and customers to remember to give everybody space and grace and to know that we are not firing on all cylinders right now and that’s okay, it is OK to not be OK,” he said.  “As Americans, and Minnesotans especially, it is in our DNA to work hard and to figure it out, and so the pandemic is extremely challenging.”

One thing that has helped the brewery weather the pandemic so far is innovation. The Lakes & Legends business model changed several times in 2020 and will continue to evolve in 2021. It’s had to change staffing and rethink purchases. The business added delivery options and installed a new point of sale system for a more digital experience. “It is adapt or die. You really don’t have another choice,” Taylor said.

Taylor said he is grateful for the support his business has received, especially from his Blaine and Circle Pines neighbors who regularly put in very large orders for him to deliver to them.

Lakes & Legends is currently open for to-go orders and delivery (once a week). Of course, customers can also purchase gift cards and merchandise. Visit lakesandlegends.com/ for more information.

Taylor encourages everyone to continue supporting small businesses. “The major corporations, the big box stores, they are going to be just fine; they are thriving right now, but it’s the small businesses … Those are the places that may not be around this spring or summer,” he said. “Support the places that you like going to. A meal once a week or even once a month, is likely the difference of them making it through this or not.”

Big Wood Brewery is doing its best to stay afloat throughout the coronavirus crisis, but restrictions have made for a challenge unlike any other the team has faced in its decade-plus long history.

The pandemic has led to a series of unforeseen problems for the beer industry, said Sales Manager Jamey Worley, an aluminum can shortage being among the biggest.

The COVID-19 pandemic has dramatically decreased draught beer sales, as breweries cannot sell kegs to restaurants or pints to taproom patrons at the same rates as pre-pandemic. As lockdowns and social distancing guidelines confine people to their homes, more and more consumers have been purchasing cans of beer to drink at home.

With a finite amount of aluminum to manufacture those cans, the supply chain has proven unable to handle the increased demand, and so the industry is bracing for a shortage. Local craft breweries like Big Wood have been hit the hardest by the can crisis, as they generally have fewer resources and less leverage with metal suppliers.

At the same time, Big Wood is facing a deficit due to an excess of beer that it has not been able to sell.

“Just think about how precious our resources were when we were operating at 50% capacity outside and 25% inside. Then, we were forecasting to have beer going out into the marketplace,” Worley said. “It took all our resources to buy the stuff to put it into, and now it’s out there rotting …. You think about the waste there and you’re like, ‘You’re kidding me.’ It’s not like we have money to spare right now.”

Worley said that Big Wood will continue to comply with state restrictions, though she and the rest of the team worry about their future. So far, the support of loyal customers has helped them weather the storm.

Big Wood offers free delivery to homes within a 10-mile radius of the brewery with a $20 minimum order and $10 delivery to homes outside of that radius with a $30 minimum. Delivery is free for all orders over $50. Growlers can also be purchased online and picked up at the brewery, located at 2222 4th St., White Bear Lake. For more information, visit bigwoodbrewery.com.

The brewery owners can’t wait to return to the fun part of the industry. They look forward to the days when their taprooms are at 100% capacity and they can once again host special events, offer samples and attend beer festivals.