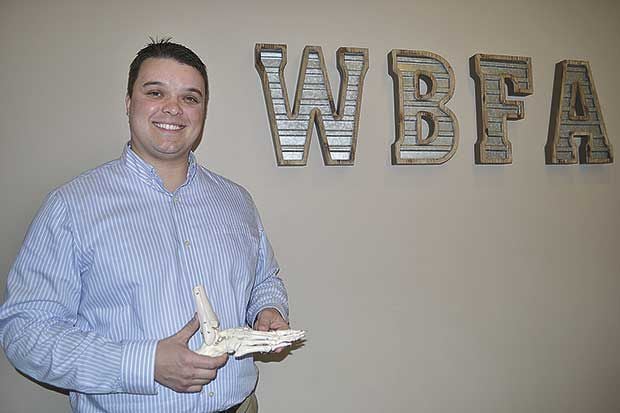 Phillips has owned the White Bear Foot and Ankle Clinic at 4653 White Bear Pkwy. since 2014. A White Bear native, he grew up on Bald Eagle Lake and graduated from Hill-Murray High School. He received his doctor of podiatry in Ohio, where he met his wife, Mary. 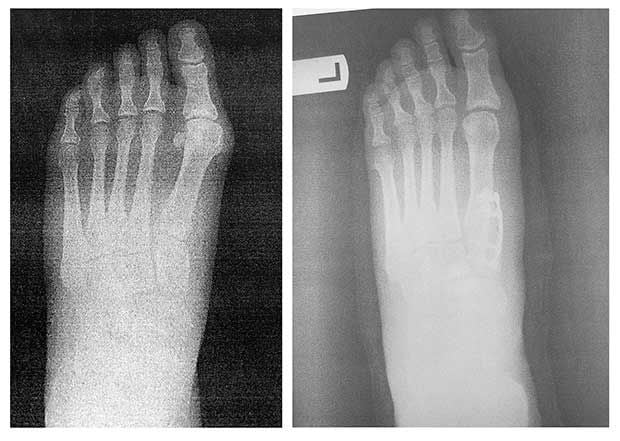 The post-op lapiplasty procedure to correct Foell’s bunion is shown at right. Her pre-op radiograph, left, shows the bunion deformity. Using instruments to align the metatarsal, the joint is corrected before a cut is made. Two stainless steel plates are affixed to the bone with screws for a rapid return to weight bearing.

Phillips has owned the White Bear Foot and Ankle Clinic at 4653 White Bear Pkwy. since 2014. A White Bear native, he grew up on Bald Eagle Lake and graduated from Hill-Murray High School. He received his doctor of podiatry in Ohio, where he met his wife, Mary.

The post-op lapiplasty procedure to correct Foell’s bunion is shown at right. Her pre-op radiograph, left, shows the bunion deformity. Using instruments to align the metatarsal, the joint is corrected before a cut is made. Two stainless steel plates are affixed to the bone with screws for a rapid return to weight bearing.

Oh, the abuse our feet endure. Painful bunions? There's a new remedy for that.

A patented procedure called lapiplasty is the future of bunion surgery.

White Bear Lake podiatrist Christopher Phillips is one of the first in the metro to perform the technique.

“The procedure is driven to create a technique that is controlled, reproducible and lends itself to confidence in the results,” Phillips said. “It aims at restoring anatomy back to normal by correcting the deformity at the joint. A patient can bear weight almost immediately following the surgery.”

Previous methods for fixing the deformity, and there are many, require cutting the bone behind the bunion and sliding it back beneath the toe. Phillips describes it as a “nonanatomical correction that lends itself to recurrence.”

A bunion is a bump on the side of the foot. It forms from what the podiatrist calls a “structural deviation” of the metatarsal joint and big toe.

The first patient to have the procedure under Phillips' care, Jessi Foell, can't rave enough about the results.

Foell, 40, had been living with a painful bunion on her left foot for years. It kept her from doing things she enjoys, like playing tennis or using the treadmill.

“I had always heard horror stories of traditional surgery where they break the bone and shave it,” Foell relayed. “A podiatrist referred me to Dr. Phillips, saying I was a good candidate for this new procedure. I am so happy with it I will probably get the other foot done within a year.”

A walking boot was required post-surgery, but both the downtime and the pain were minimal, Foell said. “It has been the complete opposite of what everyone tells me of their personal stories. It has been so worth it.”

According to Phillips, people of any age can have bunions. “All sorts of structural deformities will predispose a foot to bunions,” he said. “High heels can be a component. Pointy shoes play a role, especially if worn for decades. Or it can be genetic.”

Foell started experiencing pain in her 20s from the protruding bone. “Mine wasn't disgusting on my foot. It just hindered me from doing things I like. My foot would throb for hours after a few minutes of exercise.”

Within four days of surgery, she was getting around in just the boot. The St. Paul woman worked from home the following week but could have returned to work, she said.

Lapiplasty isn't for every bunion deformity. “But it's a technology that standardizes the technique, which hasn't been out there before,” noted Phillips. “It takes into consideration the rotational deformity portion of a bunion; it looks at it in three dimensions. Rotation is a big component. We attribute rotation to the rate of recurrence.”

If a patient has a bunion deformity that has created significant arthritis at the big toe joint, they would not be a good candidate.

“Bunions get a bad rap. It doesn't have to be a bad experience,” Phillips said. The surgery is performed in the hospital; patients are put into a deep sleep for the 90-minute procedure.

According to the company that invented lapiplasty, Treace Medical Concepts Inc., 87 percent of bunions have a metatarsal frontal plane rotational deformity. If not corrected, patients are 12 times more likely to have a recurrence.

It’s a great technique to cure the patient when he has problems in the joints and https://www.bestbritishwriter.com/ivoryresearch-com-review/ provide good info to build writing skill for students. The surgeon claims that the person will feel comfort right after the operation. Its very quick and result taking technique.