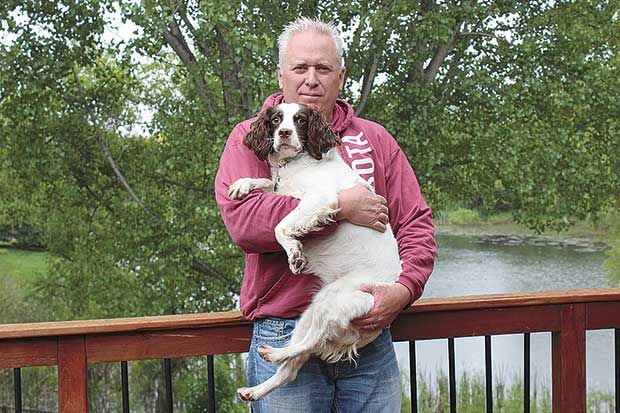 Mike Litman, Lino Lakes resident, is a handler to Judy, a Springer Spaniel that can sniff out explosives. Litman received Judy from K-9 Detection Services (AMK9) and has been with her since March. 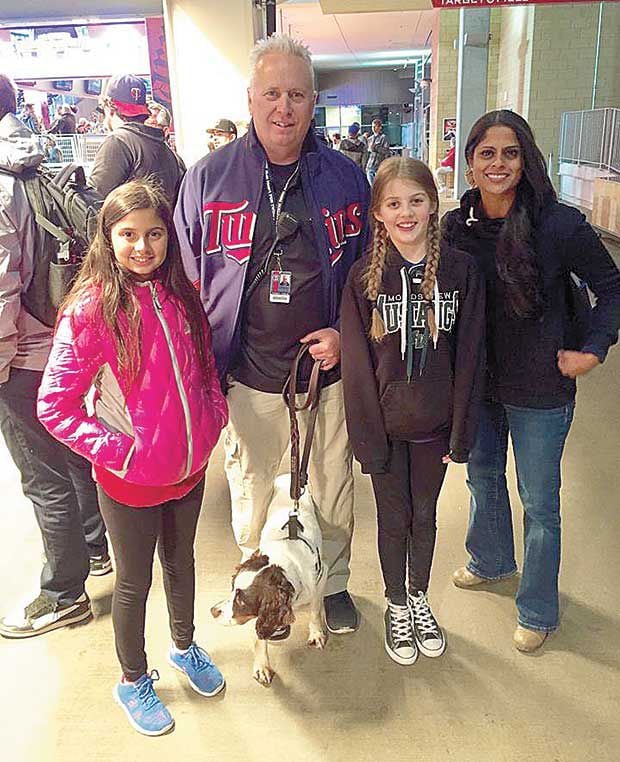 Fifth-graders and Blaine residents Maya Arnold (left) and Noelle Buckley pose for a photo with their favorite Twins mascot, Judy, and her handler Mike Litman. 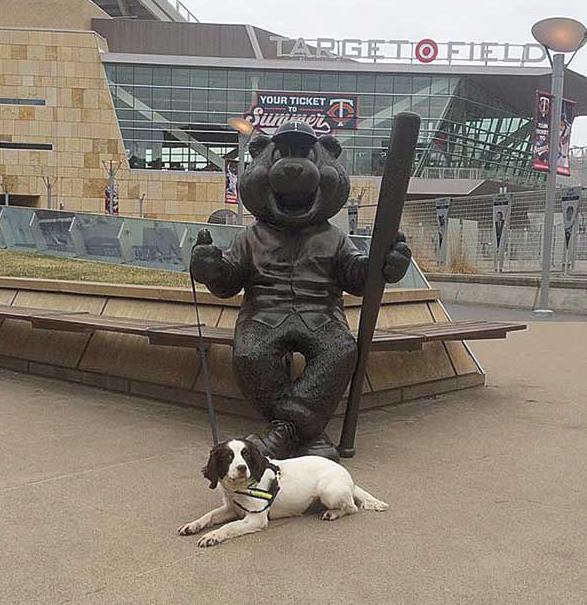 Judy has become a second mascot for the Minnesota Twins. She will work every home game this year, making sure fans stay safe.

Mike Litman, Lino Lakes resident, is a handler to Judy, a Springer Spaniel that can sniff out explosives. Litman received Judy from K-9 Detection Services (AMK9) and has been with her since March.

Fifth-graders and Blaine residents Maya Arnold (left) and Noelle Buckley pose for a photo with their favorite Twins mascot, Judy, and her handler Mike Litman.

Judy has become a second mascot for the Minnesota Twins. She will work every home game this year, making sure fans stay safe.

LINO LAKES — Minnesota Twins fans are often greeted by T.C. Bear while attending home games, but now they may run into another happy face — and a wet nose.

Springer Spaniel Judy, of Lino Lakes, is 5-1/2 years old and a whopping 32 pounds. Judy is not at Target Field because she likes baseball, but she's there instead to sniff for trouble.

“She is there to keep them safe. I think it makes people feel a lot better, especially when you see what's on TV,” said handler Mike Litman, a longtime resident of Lino Lakes. “The Twins go the extra mile, not only in security, but in everything they do.”

Target Field Security Manager Jeff Reardon said, “At MLB and the Minnesota Twins we really try to be one step ahead of the game with being proactive with security. It is a really solid venue. In light of Boston and Manchester, people really appreciate it (having Judy present) and they have really embraced it.”

At every home game, Judy and Litman are present from when the gates open until after they close. Before gates open, they are walking outside the stadium while Judy sniffs for trouble — or explosives. After the first pitch, the two enter the stadium and continue to walk around. On average, the two can walk between 3 and 5 miles during each game.

If a unattended bag is found, Litman and Judy go to the scene to check it out. Reardon also utilizes Mall of America K9s and Minneapolis Police Department K9s, but only at about 13 games, whereas Litman and Judy are at all 81 home games.

Litman has been with Judy since they completed three weeks of training together in Alabama in March. Judy came back a two-year deployment in Baghdad in September 2016, so there was a bit of a transition.

“The work style is different. In Baghdad, it is eight hours of working. Here, sometimes she is just walking, she is not constantly searching and that is what she wants to be doing,” Litman explained.

“She is curious and loves working. She has always got to be sniffing and she is always wiggling.”

Judy is from K9 Detection Services (AMK9), which is a U.S.-based specialty canine services provider with an extensive background in training, deploying and managing canine teams for explosives, narcotics and other special purposes. AMK9 provides canine detection and security solutions to government agencies, nongovernment organizations and private entities.

Litman, who is a retired federal law enforcement officer, was employed by the Bureau of Alcohol, Tobacco, Firearms and Explosives (ATF) for 26 years. He found out about AMK9 after another retired ATF agent told him about it. While employed by ATF, Litman was a handler of two dogs. He retired in 2014, became a dog handler with another organization and then started with AMK9 in March.

Judy went through an initial training with a trainer from AMK9. After that training was complete, Judy along with Litman and an instructor completed another training which included both room searches and vehicle searches.

Before her training was complete, Judy had to pass an odor recognition test. During the test, two circles of 15 cans are set up, some of which are “hot cans.” In order to pass, Judy had to alert every “hot can” within the circles.

“She is the best dog I have ever worked with, the best dog I've ever seen,” Litman said. He recalled in the beginning of training, a couple other handlers were joking around with him that his “small dog” wouldn't be able to do what their big dogs could do. “A week into training, they were all asking me to trade,” he said. “It's much easier to work with a dog than it is to work with another person.”

Reardon added, “She is a worker. She just goes, goes, goes.”

Not only does Litman enjoy Judy's presence, but so do the Target Field employees, the fans and especially the children. “All the kids love her. No one is afraid of her, because she is so small,” he said.

Reardon said,  “Sometimes it is a detriment because Mike can barely walk 10 feet, whether it be an employee, or a child, or somebody confronting him and wanting to know what he is doing. Mike is dialed so is Judy.”

Overall, people are happy Judy is there sniffing away to keep them safe.

“Most people are appreciative of the dogs, especially during these times. The fans have a really positive response to her and the employees always want me to stop so they can say hi,” Litman said.