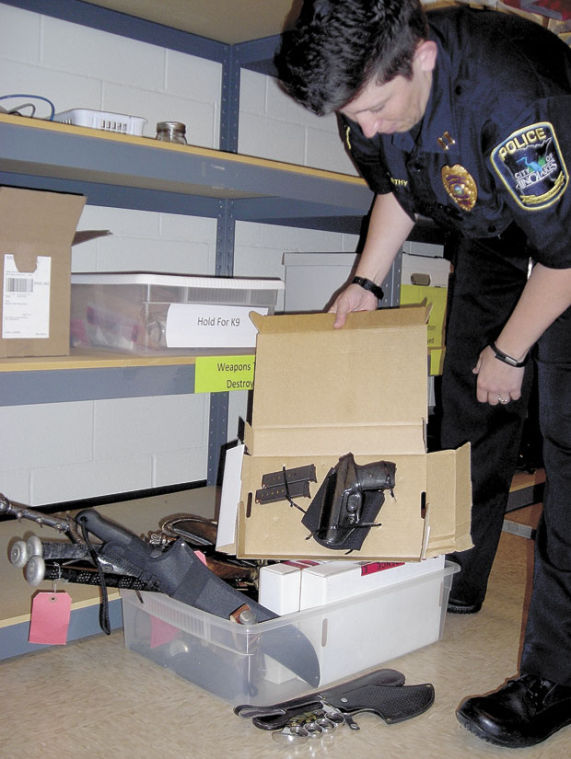 The police department destroys items that were used as weapons after the items are no longer needed as evidence. The evidence room’s box of weapons to be destroyed is currently home to a small pistol, some baseball bats, a sword with a ornately spiked hilt, and more. – Photo by Ryan Howard 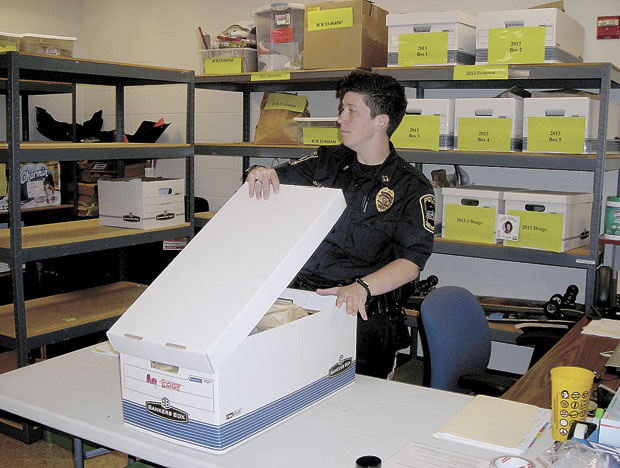 The police department destroys items that were used as weapons after the items are no longer needed as evidence. The evidence room’s box of weapons to be destroyed is currently home to a small pistol, some baseball bats, a sword with a ornately spiked hilt, and more. – Photo by Ryan Howard

LINO LAKES — Being a police officer is often a weird job, and collecting and handling evidence is often one of the weirdest parts of the work. Nobody wants their stuff taken from them, even if the stuff was illegal or not rightfully owned by the person who wants it back.

Lino Lakes Police Captain Kelly McCarthy remembers one such case in particular, when an officer pulled over a pickup truck driven by a man who had committed a host of violations (his passenger was in similar legal trouble).

“In the bed of their truck they had thousands of pounds of copper,” McCarthy recalled, noting that police immediately suspected that the metal, some of it quite valuable, was stolen.

The men were on the way to recycle the copper, but McCarthy said that when questioned, they said it wasn’t their copper and that they didn’t know where it had come from (the truck didn’t belong to the driver). The police department tried in vain to locate the owners of the copper, posting notices and making public announcements, but no one came forward; after a while, the department recycled the copper itself and gave the city a check for $4,000.

“Probably the people who are most adamant about getting their stuff back are criminals,” she said with a smile.

For the last eight years or so, McCarthy has managed the odd corner of police work that is the evidence room as one of three evidence custodians — Officer Mike Monson and Detective Melissa Hagert being the other two. The job is very important and very technical, said McCarthy, as any evidence that is lost or tampered with can’t be used in a case.

“That process is in place so we can tell you where that evidence is and who’s had access to it and when,” she said.

The department recently completed an internal audit of the evidence room, to be followed by an external audit before McCarthy transfers her evidence room responsibility to Sergeant Kyle Leibel. The department uses a rigorous process to keep track of its evidence, made a bit easier now by the use of speedy digital record keeping.

“For a long time we had to keep a computer with a floppy drive,” McCarthy recalled, grimacing at the thought.

When evidence is first collected, whether through a search warrant, a bust or a recovery, it is taken to the department’s evidence processing room. It must be properly sealed and then affixed with an evidence sheet, which details what the evidence is, the case it relates to and who handles it. The sheet remains with the evidence at all times except when the evidence is sent to the Tri-County Regional Forensics Lab in Andover for testing.

After being sealed and affixed with paperwork, the evidence is put in a pass-through locker, where the evidence room supervisors can receive it, file it in the department’s computer system and place it in its appropriate place in the room. A separate pass-through locker is used to give evidence back to detectives and officers who need it for testing, investigations or court hearings. The room itself must be accessed by key card, as security is paramount.

As for the room itself, the mid-sized, concrete-brick-walled space is lined with metal shelves, each one neatly filled with cardboard or plastic boxes bearing the year the evidence inside was collected. Some boxes are more specific, with titles like “2011 Drugs” or emblazoned with a specific case number. Drugs (separately organized as illicit or prescription) and weapons to be destroyed are placed against the north wall, and boxes of items that need to be returned to their original owners or auctioned sit on the floor.

Thanks to the digital cameras officers keep in their cars, most stolen goods can simply be photographed and returned to their owners. What really bothers McCarthy is when the department can’t figure out who owns a recovered stolen item; she’d much rather return a piece of property than sell it.

“[For this] amplifier I’m going to auction, I know it was stolen, but I don’t know from who or where or when,” she said.

Sometimes, there is too much evidence from a case to be stored in a room, as with a marijuana grow operation the department busted this summer. The pots and growing lamps were stored in the department’s secure garage for a time; McCarthy said the department eventually got permission to donate the 30-some bulbs from lamps, valued at $117 each, to the University of Minnesota’s agriculture program.

Some evidence kept in the room is old. Though an audit always uncovers some things that can be destroyed or auctioned (per a court letter stating that the related case is now closed), McCarthy still found some VHS tapes collected in 2003 and some photos used as part of an investigation in 1975. The decades-old stuff used to be more common, she added.

When she started working in the evidence room in 2005, she said, “there were things in here from before I was born.” She found and filed old guns and other items (tools and drug paraphernalia are commonly confiscated as part of cases), and she remembered a brief moment of shock when she opened up a metal case and found a box of grenades — likely from a period in the 1980s when the department was considering operating its own SWAT team.

“I didn’t know what was in there,” she said, adding that she quickly called the St. Paul Bomb Squad to take the explosives away.

The last audit revealed no grenades, but McCarthy said the process always uncovers something small the department missed — usually something that police thought was destroyed when it wasn’t, like a pack of cigarettes recovered from a theft investigation. She, Hagert and Monson have tweaked the evidence organization system to be more efficient and to require fewer middlemen while maintaining responsibility, and she has no doubt that Leibel will continue the practice.

“It’s nice to have employees who are creative and who like process improvement,” she said.

What you need to know about police evidence

• Avoid having to deal with the evidence process to begin with; your property doesn’t have to become evidence if you take precautions. “It’s very rare that we get thefts out of secure vehicles,” said McCarthy.

• Try to keep a secure file of identifiers (like serial numbers) of your valuable property. Then, if your property ends up in an evidence room in a different city or state, you can still recover it by matching the description with your information.

• After a court gives the police department the OK, the department sells some of its evidence on propertyroom.com. When it is auctioning a car, it goes through Total Auto Solutions in Little Canada.