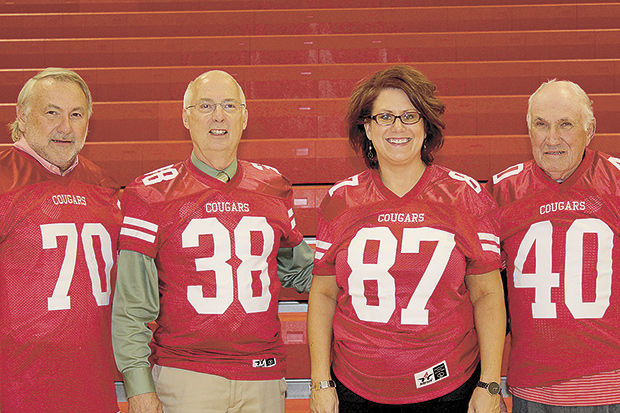 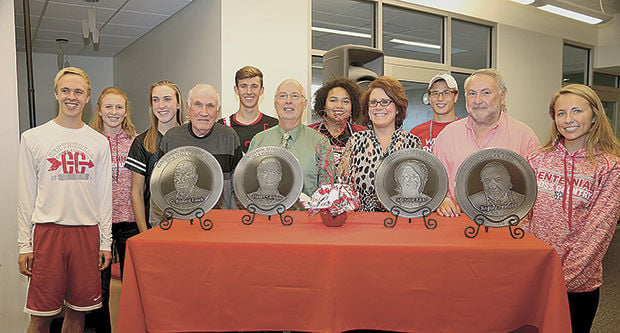 Richard Lasch, Duane Carlson, Michelle Kline and Roger Crawford pose for a photo with their Hall of Fame plaques and some Centennial High School students. The plaques will be placed on the Hall of Fame wall in the new Learning Commons in the west high school building.

Richard Lasch, Duane Carlson, Michelle Kline and Roger Crawford pose for a photo with their Hall of Fame plaques and some Centennial High School students. The plaques will be placed on the Hall of Fame wall in the new Learning Commons in the west high school building.

The Centennial School District inducted four members to the fourth class of the Hall of Fame Friday, Sept. 23.

The Hall of Fame, which was established in 2013, honors alumni and individuals who have made a significant impact on Centennial schools.

The Hall of Fame has two categories: Distinguished Alumni, which honors alumni who have demonstrated outstanding professional accomplishments and/or who have used their education to impact society, and Distinguished Service, which honors individuals who have a longstanding history of service to the district, and who have provided services of time and commitment to education.

The 2016 inductees include Roger Crawford, Michelle Kline, Duane Carlson and Dick Lasch. All four inductees were invited to a Hall of Fame luncheon, pep fest and the homecoming half-time show Sept. 23.

“It is an honor to recognize members of the Centennial community who have made an impact on our students and on society,” Superintendent Brian Dietz said. “Our recipients demonstrate outstanding professional accomplishments and have a longstanding history of service to the district.”

Crawford, who lives in Mora, graduated in the class of 1970. During his time at Centennial he

described himself as “an average student” and was involved in football, basketball and baseball.

“It is a great honor. I am sure there are other people who are as deserving or more deserving. I know in our class we had a lot of great people and a lot of high achievers,” he said. “It is quite an honor and privilege for me to get this.”

After Crawford graduated, he attended St. Cloud University to further his education, but in 1972 he was drafted into the U.S. Navy. During his four years in the Navy, he was on the USS Oriskany in Oakland, California where he served as a Navy journalist. As a Navy journalist he was involved with the daily newspaper, radio station and TV.

After he got out of the Navy, he decided to go back to school and held various jobs. He then went back to school to receive a teaching degree. He taught in Milaca and also taught and was principal at St. Mary’s Catholic School in Pine City.

He has been a Mora City Council member, the Mayor of Mora, a Kanabec County Board member and also served in the Minnesota House of Representatives District 8B.

He currently is the head of the Republican Party in Kanabec County, chairman of the Jason Rarick Minnesota House of Representatives Campaign and a co-chair of the Stuart Mills Campaign for the U.S. House 8th Congressional District.

Kline started skating at the age of five and made her first world team at the age of 13. When she was not at Centennial she would have tutors while training.

“I was very, very fortunate. Our superintendent, principal and one of my teachers were a great support system. I swear, If it wasn’t for them I wouldn’t have had the opportunity that I had,” she said. “I am so grateful for the three of them, that they allowed me to try something different than just being in the classroom and trying sports at school.”

After graduation, Kline competed in the 1992 Olympics, despite being in a car accident six months before the Olympic trials.  From the accident, she suffered a lacerated spleen and kidney, broken ribs and a punctured lung. She went back to compete in the 1994 Olympics before retiring.

Kline currently serves as the director of operations for MHC Culinary Group at the St. Paul River Center. She was shocked when she received the call that she had been selected.

“When the call came I will be honest... I love to speak so I talk all the time, and I was speechless. I was truly honored and humbled, but I didn’t know what to say,” she said. “The places I’ve been, the people I’ve met, the experiences I’ve had, I would’ve never have had that without the support of Centennial and the community.”

Carlson, who lives in Blaine, was selected for his service to the district from 1969-2007. He began his teaching career at the middle school where he stayed for seven years and then taught at the high school for 31 more years. After he retired, he has continued to be a substitute teacher.

Carlson is also recognized for his involvement in Centennial athletics. Over 50 seasons, he coached more than 40 Centennial teams in football, basketball, baseball and the varsity softball team.

“It has left me speechless. It is such a great honor to be even considered to be a part of that group and to be inducted makes it even more special,” Carlson said.

His wife Denise also worked in the district for over 20. The Carlsons have three daughters, all of who are Centennial graduates.

“It has been such a pleasure... we made a decision early in my teaching career to live and raise our kids in the same community where I taught. I think we benefited from that and our daughters have benefited in living in the community where we taught,” he said. Carlson added he really treasures all of the relationships and friendships he has made through his involvement in the district.

Lasch, who lives in Circle Pines,  was recognized for his service to the district from 1960-2000. Lasch not only worked as a fifth and sixth grade teacher, but also coached and served as the recreation director.

He was devoted to improving the sport and recreational programming and laid the foundation for many sports associations that still exist today.

“It is quite an honor. I would’ve not expected it,” he said. “The school district was really small when we came here. To watch it grow has been amazing.”

Today, Lasch enjoys his retirement by watching his grandkids and great grandchild grow up, playing golf and spending time at his cabin near Alexandria.