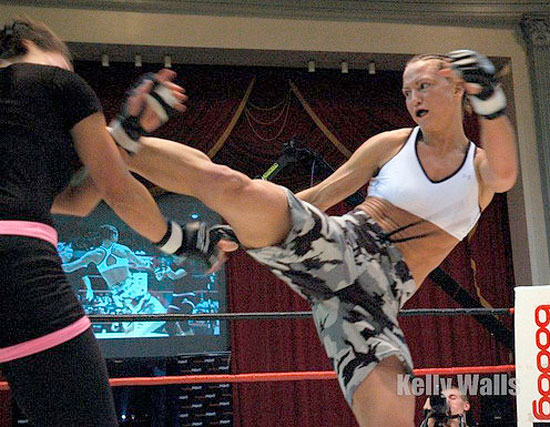 Young specializes in knocking out opponents with kicks to the head. "It's pure elation," the 26-year-old says. — Submitted Photo 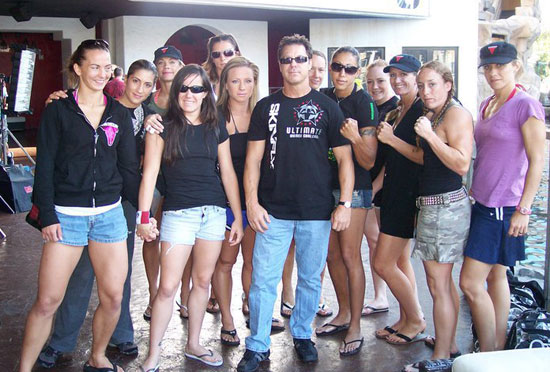 Young (far left), with castmates on the set of reality show "Ultimate Women Challenge." She claims the show still owes her upward of $35,000 in winnings and stipends. — Submitted Photo

Young specializes in knocking out opponents with kicks to the head. "It's pure elation," the 26-year-old says. — Submitted Photo

Young (far left), with castmates on the set of reality show "Ultimate Women Challenge." She claims the show still owes her upward of $35,000 in winnings and stipends. — Submitted Photo

ST. LOUIS PARK — She did a reality television show, she fought an American Gladiator, and she knocked out the current world No. 1 women’s mixed martial arts (MMA) fighter with a vicious muay thai kick to the head.

MMA fighter Kaitlin Young might be the most deadly product of Centennial High School ever, but back in those days, she described herself as an “odd combo of nerd and jock.”

“I was really into history and political science but also enjoyed weight-lifting classes,” said Young, 26. Her favorite classes were weight lifting and conditioning with now retired teacher Mike Watson.

Last Saturday, Young fought for the first time since last April at the Fight Strong for the Cure Freestyle Cage Fighting event in Shawnee, Okla. A portion of ticket proceeds went to breast cancer research. The fight was a pivotal one for Young. She’s trying to get her fighting career, and her finances, back on track after a legal ordeal following a taping for reality show “Women’s Ultimate Challenge.” Young says she’s still owed upward of $35,000 in stipends and winnings. The show, which was filmed in Las Vegas last summer, has yet to air.

“There were a lot of dramatic events that took place,” Young said. She was one of 16 women MMA fighters who lived in a single house over the five-week shoot. “They didn’t do a good job of buying us groceries. At one point, there were girls fighting over bananas.” One of the show’s participants reportedly ended up homeless after not being rehired at her job after the show.

Part of Young’s contract requires her to keep her record on the show private. It’s a problem in terms of booking new fights, she said. From the sound of it, Young more than held her own in the octagon ring during the show’s filming.

She and six other fighters filed a lawsuit against the show and its producers last March. Since then, Young has fought only twice, mostly keeping busy with a day job as a personal trainer at Custom Fitness in Minneapolis. She currently lives in St. Louis Park with boyfriend Ryan Murray, a professional Thai boxer. Getting back on her feet after “Ultimate Women Challenge” wasn’t easy, Young said, but it’s coming along. Part of the problem involves scheduling credible fights. In the MMA world, it’s not uncommon for fights to fall through with one fighter withdrawing and no replacement found in time. Young said she won’t take that extra work shift while training for an upcoming fight, only for it to fall through.

“If it falls through a week out you get nothing,” she said. “It’s like if you’re a general contractor and you do all the work only to have the people say ‘I don’t want this house.’”

Young grew up in Circle Pines and graduated at the top of her class from Centennial. Her positive path was almost derailed at 14, when Young said she was surrounding herself with the wrong people. Her mother, Cindy, intervened by forcing her daughter into an activity. Young chose tae kwon do.

“(Without tae kwon do) I don’t think I would be a hardened criminal but I might have been a loser,” she laughed.

By 15 she was competing, which she said was a thrill for her late father, who died a year later.

“He didn’t get to see my more serious fights, but I think he would have been crazy about it,” she said.

And the fights did get serious — millions-of-people watching serious.

Her ascendance up the women’s MMA ladder was a rapid one. At 23, she won her first MMA fight in front of a hometown crowd at Myth Nightclub in Maplewood. A month later, she won three tournament fights in one night at an Evansville, Ind., event. On the way to the championship belt, she knocked out Miesha Tate in 30 seconds. Tate currently holds the world No. 1 ranking in Young’s 126-to-135-pound weight division.

Perhaps her career-defining moment came in May of 2008, when Young fought the “Face of Women’s MMA” Gina Carano. At the time, Carano was also famous for her spot as “Crush” on the NBC show “American Gladiators.”

Later, it would become the most watched MMA event in history, airing on CBS with an estimated 4.3 million average viewers. For three minutes, Young kicked and grappled with Carano. In the first round, Young escaped an agonizing hold designed to cut off oxygen to the brain. She fought back in the second round, and was ready for a third before ringside doctors called the fight because of a cut under Young’s left eye.

“They thought I had a broken (eye socket), but I knew it was just a cut and a black eye,” Young recalled.

She later posted a photo of herself with the black eye on Facebook, posed with thumbs up.

“I did it to prove it wasn’t serious,” she said.

A cut under the eye means blood would flow down the fighter’s face without blurring his or her vision. Critics of the call that day have said it wouldn’t have happened during a men’s fight.

“My guess is that a decision was made to stop the fight due to a feeling that primetime was not ready for female fighters bleeding,” said ringside doctor Happy Reynolds in a 2008 story for City Pages.

In terms of mainstream recognition, Young thinks women’s MMA could be successful with backing by Ultimate Fighting Championship, currently the world’s largest and most successful MMA promotions company.

Fighting on the big stage has brought with it a level of celebrity for the Circle Pines native. Perhaps the strangest Facebook request she received (she has nearly 5,000 friends, the maximum amount allowed before users must switch to “public figure” accounts) was a man asking her to beat him up for $100.

“You also get a lot of sweet messages from people you don’t know wishing you luck,” she said.

For now, Young continues to look for another crack at the top. She has fought mostly in the top 10 over the last two years, and she continues to train hard. Last week, she was watching her sodium in final preparations to make weight for the Oklahoma fight last Saturday. Someday, she hopes to open her own gym to train fighters.

“If you want to do this, be prepared to work hard,” she said. “Some people think it’s all glamor or fame but it’s mostly going to bed at 9 p.m., dieting and no partying. You live like a granny.”

Nicholas Backus can be reached at quadnews@presspubs.com, 651-407-1235 or on Facebook keyword “Quad Community Press.”