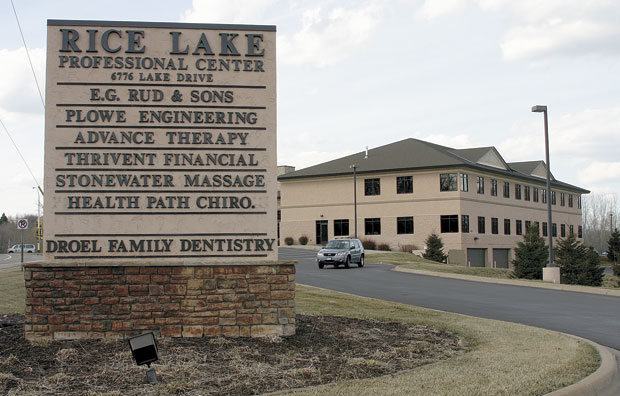 A sign at the entrance to Rice Lake Professional Center in Lino Lakes is all that remains of Stonewater Massage and Skin Care, a business operated by Stephanie Lasch until it closed in February. Lasch was arrested last week for identity theft after allegedly making fraudulent transactions to the accounts of Stonewater customers. – Photo by Ryan Howard

Stephanie Rae Lasch was the owner of the now-closed Stonewater Massage and Skin Care in Lino Lakes.

LINO LAKES — Lino Lakes police announced last week that Stephanie Rae Lasch, the owner of the now-closed Stonewater Massage and Skin Care in Lino Lakes, was arrested April 10 as she was allegedly attempting to flee the country.

Lasch, 35, of East Bethel, was charged April 11 in Anoka County Court with felony identity theft. Police first began investigating her in December after receiving several calls that someone at Stonewater had used financial information from Stonewater customers to make additional fraudulent charges to the business. Police allege that Lasch had almost 80 known victims and defrauded them of about $6,000 (possibly more); they have also received around 140 complaints reporting that the business did not honor gift cards after it closed as well as other, similar civil complaints.

Though police announced an investigation in January, they did not release Lasch’s name, arrest her or request charges because they were still investigating the extent of the case. However, police learned that Lasch had allegedly purchased one-way tickets for her and her husband and was attempting to leave the country on the morning of April 10.

“She boarded a flight to Beijing, China, and she was arrested on the plane before it took off,” said Lino Lakes Police Sergeant Dale Hager.

The case’s investigation is still ongoing, and police continue to ask people who may have been defrauded at Stonewater to call the department at 651-982-2300.

“We took care of enough to get her charged with a felony,” said Hager.

According to court records, Lasch first came under suspicion after the Lino Lakes Police Department received several calls in December 2013 and January of this year regarding allegedly fraudulent charges to people who had visited the business, which was formerly located at 6776 Lake Drive. Police conducted interviews with the staff, who reportedly had become suspicious of Lasch after “hundreds” of calls from people claiming that there were false charges on their accounts. Lasch allegedly told her employees to chalk up the charges as billing errors.

After checking Stonewater’s computer system, police learned that Lasch allegedly made many fraudulent charges to various previous customers’ accounts of $64.28 — the price of a one-hour massage. Lasch was reportedly behind on rent and unable to make payroll. The business closed in February.

Lasch was picked up by airport police at the Minneapolis-St. Paul Airport after she had boarded a plane, according to Hager (he noted it is airport police policy to wait until the suspect has boarded). Court records allege that Lasch had no plans to return and state that she had left her dogs with a company that would vaccinate them and transport them to China for a cost of $10,000.

Police do not expect to arrest anyone else in connection with the case. All civil complaints are being forwarded to the Better Business Bureau of Minnesota and North Dakota. Hager said calls to the department went up after someone posted a previous police department press release on the case to Stonewater’s old front entrance.