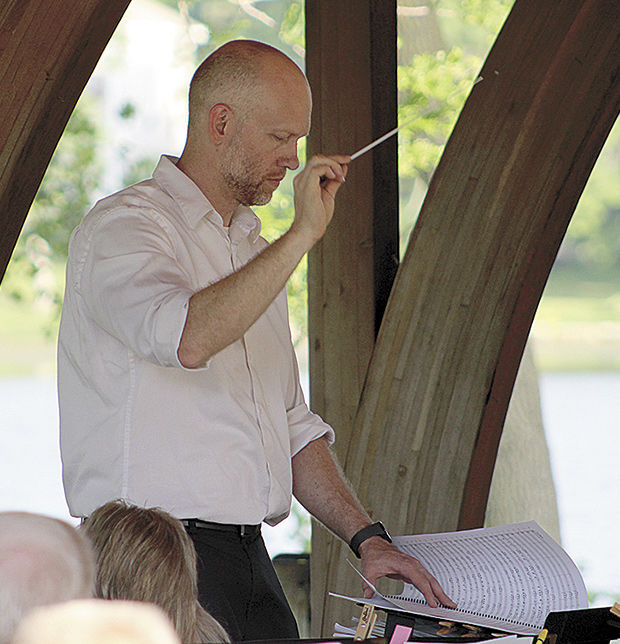 Centennial Community Band Director Barry Zumwalde has been the director since fall 2013. He is currently a music teacher in the Forest Lake School District. 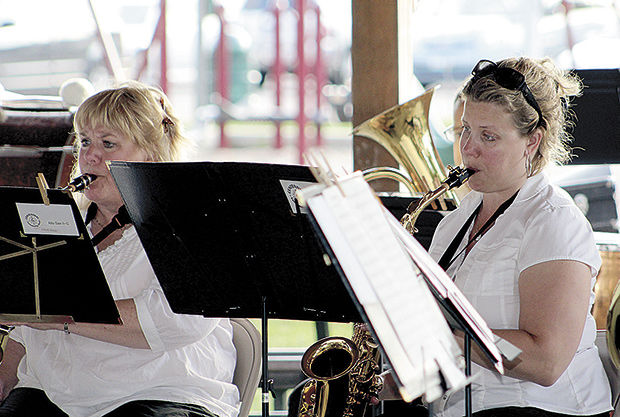 Centennial Community Band member Melissa Jaques of Centerville plays the alto saxophone. She has been a member of the band for 13 years and serves as the band's treasurer on the board.

Centennial Community Band Director Barry Zumwalde has been the director since fall 2013. He is currently a music teacher in the Forest Lake School District.

Centennial Community Band member Melissa Jaques of Centerville plays the alto saxophone. She has been a member of the band for 13 years and serves as the band's treasurer on the board.

CIRCLE PINES — People gathered on the lawn by the pavilion to kick off the summer concert, “Music on the Lake – It’s Golden” with a performance from the Centennial Community Band Thursday, June 9 at Golden Lake Park.

For the second year, the city is offering a free concert series over the summer months. This year's series has four concerts.

When the Centennial Community Band was established in 2003, it had only 12 members from around the Centennial area. Now, with around 50 members, the band has members from all over the Twin Cities. The band's performance included a mix of traditional concert band music along with classical transcriptions, which are songs written for orchestras. Songs were performed from “Star Wars,” “Beauty and the Beast,” the documentary “Victory at Sea” and the Olympics.

“We have people who are college music majors, a few music teachers, and then we also have people who haven't played in 20 years and have dusted off their instrument,” said Centennial Community Band Director Barry Zumwalde.

Zumwalde has been the director of the band since fall 2013. He is currently a music teacher in the Forest Lake School District.

Not only is there a wide range in skill level, but there is also a wide range in ages of the band members. The minimum age is 16; some members are in their 70s. The group meets every Tuesday night throughout the school year. The band performs three concerts during the school year, two to four more performances throughout the north metro in June, and has July and August off.

“There are groups you work with and sometimes they play, but there isn't that complete commitment to what you are doing, and these folks are very kind in their willingness to give everything they've got. It is really enjoyable to be a part of that,” Zumwalde said.

Band member Diane Hofer of Shoreview joined the band 2 1/2 years ago after she found out Zumwalde was the band's new director. She had previously played with him in another community band and was excited for the opportunity to work with him again.

“He just makes rehearsals such a joy to be at. If you want to work with a fabulous instructor, he is the one to work with. What he teaches the group, it really makes a difference in how we perform. He has positive attitude and he is very encouraging. He really sets a tone and makes it a real delight to be a part of,” she said.

Hofer plays the trombone. She began playing the instrument in the fifth grade and then took a break from it to start a family after she graduated from college. Some time later, she was looking for a social activity and hobby and decided to give the band a try.

“They are just the nicest people. They all come together on Tuesday nights, Barry takes control of the room and we do fabulous work together. We have huge improvements from week to week,” she said. “You are making music together and before you know it, the two hours have just flown by and it is time to go home.”

Melissa Jaques of Centerville has played with the band for 13 years and also serves as the band's treasurer. She played the alto saxophone throughout high school and then took a break from it in college. After college, she came across a community education booklet and saw information about the band. “I thought it would be fun to try,” she said.

“There are no auditions, so there is no pressure. Anybody can join.”

Currently membership fees are $70 per year. To become a member or to get more information, call Kerri LeJeune at 763-785-9007. “If people are interested in joining, we welcome them to come to rehearsal and check us out, try playing with us and see if it feels like a good fit for them and their musicianship. We don't turn anyone away,” Zumwalde said.

Other performers in the “Music on the Lake – It’s Golden” concert series include:

Saints of Swing Big Band from 7-8:30 p.m. Thursday, Aug. 18. There will be a free swing dance lesson with a Centennial Community Education instructor at 6 p.m. preceding the event.