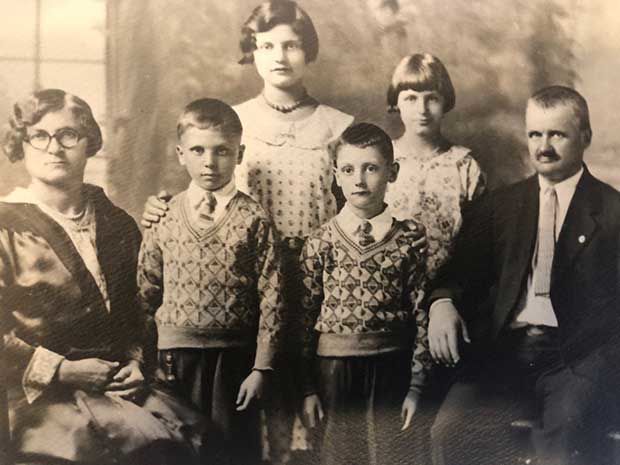 Dante Tini with family. He served as a Radioman third class aboard the U.S.S. Oklahoma and was working in the ship’s hull when it capsized after being struck by Japanese torpedoes on Dec. 7, 1941 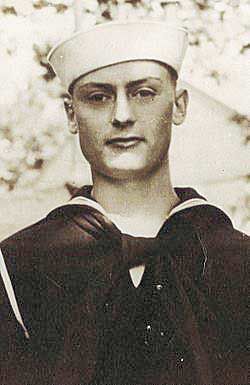 Dante Tini served as a Radioman third class aboard the U.S.S. Oklahoma and was working in the ship’s hull when it capsized after being struck by Japanese torpedoes on Dec. 7, 1941.

Sharon DeRaad never got to meet her Uncle Dante; he died during the Japanese attack on Pearl Harbor years before she was born. But this Memorial Day weekend, she'll drive from Forest Lake to Virginia, Minnesota, to attend his funeral and witness his remains buried alongside those of her grandparents, nearly 80 years after his death.

Dante Sylvester Tini was among the 429 sailors and 2,403 Americans who died in the surprise attacks on Pearl Harbor that launched the start of the U.S.’s involvement in World War II. The son of Italian immigrants, Tini, then 19, joined the U.S. Navy after graduating from high school. He served as a Radioman third class aboard the U.S.S. Oklahoma and was working in the ship's hull when it capsized after being struck by Japanese torpedoes on Dec. 7, 1941, a date that has since lived in infamy for both the United States and the Tini family.

Two weeks after the attacks, Tini's parents, Daniel and Rachel, received a telegram stating that he was missing in action. Rachel's scream, family legend has it, could be heard throughout the neighborhood.

The sudden loss of a loved one is always a tragedy, but the lack of closure around Tini's death, DeRaad said, made his family's mourning all that much more difficult and drawn out.

Tini had been scheduled to return to Minnesota on Dec. 10 and sent many of his possessions back home in anticipation of his homecoming. Though his belongings, such as his harmonica and accordion, made the return trip safely, he never did.

Because Rachel only spoke Italian, Alda often assumed the role of translator, and she frequently found herself explaining Tini's death to her mother over and over again.

“Things would come home, and my mom would have to explain to her mom that it didn't mean that Dante was coming home, just that he had previously sent those things back,” DeRaad said. “For years, my nona (Italian for grandmother) never really fully grasped that her son would never, ever come home, especially because the body was never found.”

Though DeRaad and her siblings never knew Tini personally, thanks to the stories their family members told throughout the years, they still feel connected to him.

“His memory was always kept alive at our family functions,” said Barb Maki, DeRaad's sister. “It was almost like you wanted to pull up an empty chair for him because it felt like he was going to come in and join at any minute.”

“My aunt (Alda) always said he was a really nice-looking Italian boy, and he had many, many girlfriends. He was a bit of a Casanova,” added Renee Proust, DeRaad and Maki's cousin. “He certainly was never forgotten, thanks to all those stories.”

Tini's parents and siblings never got the closure they yearned for, but thanks to advancements in forensic science, his nieces and nephews finally will.

Tini's remains were among those recovered by Navy personnel between December 1941 and June 1944. Of the 429 casualties aboard the U.S.S. Oklahoma, only 35 were identified and later interred in the Halawa and Nu'uanua cemeteries in Hawaii. The others were buried as “unknowns” in mass graves at the National Memorial Cemetery of the Pacific in Honolulu.

Thanks to advocacy on the part of a Pearl Harbor survivor, in the mid-2000s, the Defense POW/MIA Accounting Agency exhumed the remains of the Oklahoma's unknown victims. In 2012, Tini's nieces received calls from the U.S. Navy requesting DNA samples to match what could potentially be their uncle’s remains.

“Females tend to be a closer match than male, so they wanted the eldest of his nieces, which would be my sister Rachel, who lives in Albuquerque (New Mexico),” DeRaad said. “She sent a sample of her DNA in, and last summer she got a call saying that it was a one hundred percent match.”

Seventy-seven years since the telegram arrived announcing Tini was missing in action, his family was overwhelmed to finally have closure.

“Everybody cried,” Maki said. “When we were contacted for our DNA six, seven years ago, we kind of all hoped this would happen, but when the news finally came, it was such a surprise.”

“You can imagine how exciting it was to think that they kept all of these (remains) until all of our forensic studies advanced enough so that there could be a match after all of these years,” DeRaad added. “Everybody had lived for such a long time without getting closure; my mother and her mother never got it ... It's bittersweet that this is finally happening.”

On Thursday, May 23, Tini's remains will be flown into the Duluth airport. From there, they will be transported to his hometown of Virginia for what DeRaad called “a proper burial, finally.”

A visitation and funeral service will be held Saturday, May 25, at Holy Spirit Catholic Church. Afterwards, a memorial procession will pass Virginia's VFW post, which is named in Tini's honor, before his remains are laid to rest next to those of his mother and father.

“He will be buried next to his parents, which was his wish,” DeRaad said.

Though the service is mostly a long overdue memorial for Tini, it is also dedicated to all military service members, past and present.

“We're looking to honor all veterans with this service; our uncle, of course, but also all veterans,” said Maki.

The weekend will also serve as a family reunion of sorts, as Tini's surviving extended family members will traverse the country to pay him their final respects.

“We have relatives coming in from Colorado, Arizona, New Mexico. The local hotel has booked a whole set of rooms in his honor. My children will meet cousins they haven't seen in years,” DeRaad said. “Dante's coming home has reunited all of our family.”

Elizabeth Callen is a staff writer and reporter for the Lowdown, and can be reached at 651-407-1229 or lowdownnews@presspubs.com.