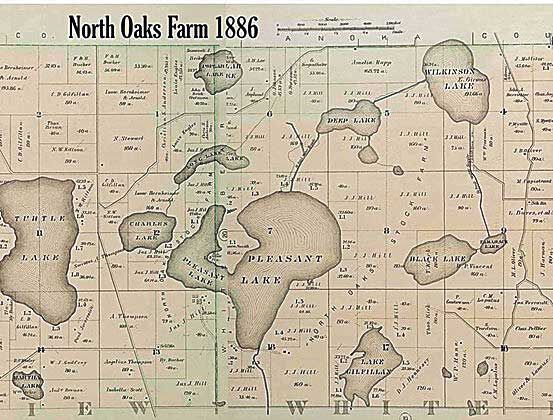 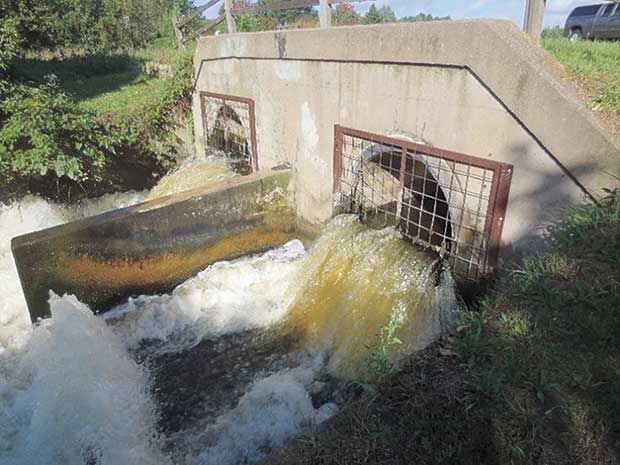 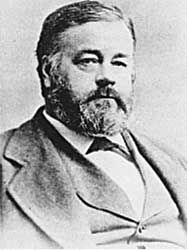 Portrait of Charles Gilfillan circa 1880.

This is the first in a series of articles by the Hill Farm Historical Society which will focus on significant people and events in the history of our community. Some of the information in this article was published in the North Oaks News in December 2016 in an article titled, “North Oaks and the St. Paul Water System.”

The acquisition of the numerous parcels of land in the area of Ramsey County, which eventually became Jim Hill’s North Oaks Farm and later the City of North Oaks, started with a fellow named Charles Gilfillan back in the 1870s. Because of this connection and the continuing presence of the St. Paul Water Company in North Oaks, as well as his namesake lake in our community, that is all most people think of when they hear the name Charles Gilfillan. But, as with Jim Hill, there is lots more to the story about Charles Gilfillan.

So just who was this guy Gilfillan?

Reading what is available about Gilfillan, and that is not a lot, reveals a fellow somewhat like Jim Hill. Gilfillan was five years older than Hill and arrived in Minnesota Territory five years ahead of Hill. His early years show him as a hard worker and over-achiever much like Hill. Gilfillan lost not only his father in childhood, as did Hill, but he also lost his mother and thus was orphaned at age 11. Gilfillan’s career included jobs in fields of education, law, city water systems, banking, and real estate and later in life he had a massive, state-of-the-art stock farm, near Redwood Falls. Sound familiar?

Charles Duncan Gilfillan was born on July 4, 1831 in New Hartford, New York, which is in the north-central part of the state. His parents, James and Janet, came to the United States from Bannockburn, Scotland, the previous year. He attended Homer Academy and Hamilton College, both in New York.

Charles “retired” from the practice of law in 1863 at the age of 32. James continued in the law practice and later became chief justice of the Minnesota Supreme Court where he served until his death in 1894.

Charles Gilfillan was elected the first chairman of the Minnesota Republican central committee in 1856 and he was a Republican candidate for St. Paul mayor in 1860.

Gilfillan married Emma C. Waage, daughter of Rev. Frederick and Angelina Waage on December 28, 1859. Emma (Waage) Gilfillan died at Philadelphia on September 25, 1863. The only child born of this marriage died in infancy. He later married Fannie S. Waage, sister of his first wife. By this marriage, there are four children, Emma K., Fannie W., Charles O., and Frederick J.

Charles represented Ramsey County in the Lower House of the State Legislature from 1864 to 1866 and he was a state senator from 1866 to 1876. The 1880 Census shows him at 48 years of age, living with wife Fanny and sons Charles and Frederick in White Bear Lake, and lists his occupation as “retired lawyer.”

Few men were more actively connected with the material interests of St. Paul and of the State. In 1882 he built the “Gilfillan Block” in St. Paul at the corner of Fourth and Jackson Streets. This building was at the time the finest of its kind in the city. He operated largely in city property and owned large tracts of land throughout the state, including the Gilfillan tract of 5,000 acres in Redwood County, which he bought in 1882 and the 3,000 acres in Ramsey County he sold to Jim Hill the following year. More about that later.

Gilfillan served on the board of directors for the First National Bank, St. Paul from 1865 to 1902. He was instrumental in the planning and construction of the St. Paul waterworks system and an organizer of the Minnesota Valley Historical Association. He moved to Redwood Falls, Minnesota in 1882. Gilfillan received an honorary M.A. from Hamilton College in 1895. He died on December 19, 1902.

St. Paul had water problems almost from the beginning. As early as 1856 the territorial legislature chartered a water company to address the issue, but nothing happened until a year later when an organization was formed to pursue the project. Surveys were done in the area of Lakes Phalen and Como, with initial construction costs estimated at $195,000.

Again, nothing happened, and in 1857 their research findings were turned over to the newly established St. Paul Water Company, a private concern. But by the fall of 1858, things still had not progressed; “there was not a single dollar subscribed,” reported a local news source. Numerous factors including the quantity and quality of local water sources and securing financing (selling stock and/or bonds) as well as the huge job of constructing the infrastructure to deliver the water posed major challenges to anyone undertaking the task.

The legislature repeatedly extended the charter of the St. Paul Water Company until finally, in 1865, Charles Gilfillan was selected one of the new slate of “Incorporators” and was named the President of the committee to move the project ahead.

By the summer of 1866 they were able to announce that $200,000 had been subscribed, and the project finally began to progress. Recognizing that in the intervening years, 1856 to 1866, the water situation had gotten progressively worse, it’s easy to see just how important Charles Gilfillan and his St. Paul Water Company were in the history of St Paul. By the fall of 1869, water had begun to flow from Lake Phalen.

From the time the St. Paul Water Company sold its initial bonds for construction of the water system in 1866, to the late 1870s when Gilfillan was buying land in northern Ramsey County, St. Paul’s population had grown from under 20,000 to over 40,000. It was evident that expanded water facilities would soon be needed.

It should be noted that the St Paul Water Company at the time was already getting water from the Pleasant/Vadnais Lake watershed. There had always been a creek flowing south out of Pleasant Lake into Sucker Lake and then Vadnais; it is clearly visible on the 1867 White Bear Township map. The potential issue, Gilfillan recognized, was with this massive investment in the water system for St Paul, they must secure the water rights from this source to protect their investment.

Ancillary to his main task of constructing a water system for St. Paul was the purchase by Gilfillan, between late 1876 and December 1880, of some 3,070 acres of land to the north of the city in Townships 30 North, Ranges 22 and 23 West. His purpose, according to his friend John Caulfield, was to control and protect the future water supply of the city, as well as to protect the company “from claims for damages for alleged flooding of meadows, principally by parties who did not own the land.” The acquisition of this land was likely done “quietly” to avoid attracting attention to his purchases and avoid driving the price up and alerting others who were potential competitors for the development of the St Paul water system.

Practically all of this land was purchased from nonresidents, some of them no doubt speculators awaiting a rise in values. Included within the limits of Gilfillan’s acquisition were Pleasant, Wilkinson, Deep, and Charles lakes. Although farmers had been cutting hay on the land without payment or permit, some were apparently not backward about claiming damages from the water company.

One can speculate, that if Gilfillan had not taken the initiative to purchase the land to secure these water rights, there might not have been a North Oaks Farm or a city called North Oaks. The land we live on could just be part of the surrounding communities of Shoreview, Lino Lakes, Vadnais Heights, or White Bear Township. It is easy to see Gilfillan was really important to those of us who live in and love this great community.

I was always curious about just how well Jim Hill knew Charles Gilfillan, and it appears he knew him quite well. They served together as life members of the Minnesota Historical Society and on the board of Directors of the St Paul Trust Company. They were also speakers at the same agricultural events and Dr. James S. Gilfillan, Charles Gilfillan’s nephew, son of brother James, was James J. Hills physician at the time of his passing.

Some citizens felt that a water company should be a publicly owned enterprise, and there was considerable discussion as to what the city’s best course of action would be. Should it purchase the plant of the existing water company, or should it construct new works?

When negotiations between the Water Company and St. Paul began, all the stock of the former—2,500 shares—was in the hands of the Gilfillan brothers; 2,400 shares held by Charles and the remaining 100 shares by James. The transfer took place on August 10, 1882, the city paying $37,000 in cash and $313,000 in 4 percent bonds and assuming the company’s bonded indebtedness.

Included in the purchase were “certain rights of flowage and drainage upon the private lands of C. D. Gilfillan in White Bear and Mounds View Towns” (note—this is what became James J Hill’s North Oaks Farm when he purchased the land from Gilfillan in 1883). Thereafter, control was vested in the Board of Water Commissioners, appointed by the judges of the district court. Elected first president of the new board was Charles Gilfillan, who served as a commissioner until December 1887.

There was also a provision in the sale that prevents the city of St. Paul from using revenue from the water sales for anything but the water department. Many cities used water department revenue for other city services to the detriment of water service. Also, Gilfillan paid for some improvements at no cost to the water department just before selling, which led Caulfield to commenting what a fair deal it was.

The demands for water for homes and industry continued to grow so by the late 1890s the water company looked north again and laid a conduit from just northeast of Deep Lake to Centerville Lake a few miles north. This was completed by 1895 and expanded in 1913 by which time St. Paul’s population had grown to 250,000 residents. They looked as far out as the St. Croix River near Taylors falls and Mille Lacs lake as potential sources for additional water. Then they turned to the Mississippi River.

To ensure an adequate supply of water for the growing city, the Mississippi River water was first used to augment the water supply for St. Paul in 1925, with the construction of a pumping station on the Mississippi River and laying a 60-inch conduit for 8 miles along County Road I to Charlie Lake on the North Oaks Farm. A second culvert was laid alongside the first in 1959 to again expand its capacity. The system is now capable of delivering as much as 90 million gallons a day.

Today the St. Paul System provides an average of 40 million gallons of water a day to its 450,000 customers in St. Paul and 11 suburbs, so you can see the Mississippi River is an essential source of water, providing 80 percent of the St. Paul water supply. Ultimately much of that is returned to the river via the Metropolitan Wastewater Treatment Plant, which can process up to 251 million gallons of wastewater a day from the metro area; once processed, it returns to the Mississippi River south of St Paul.