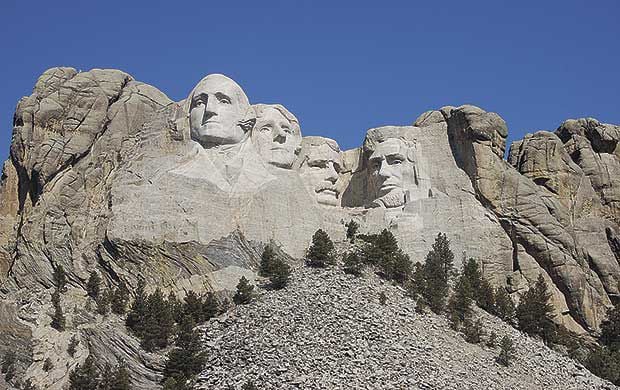 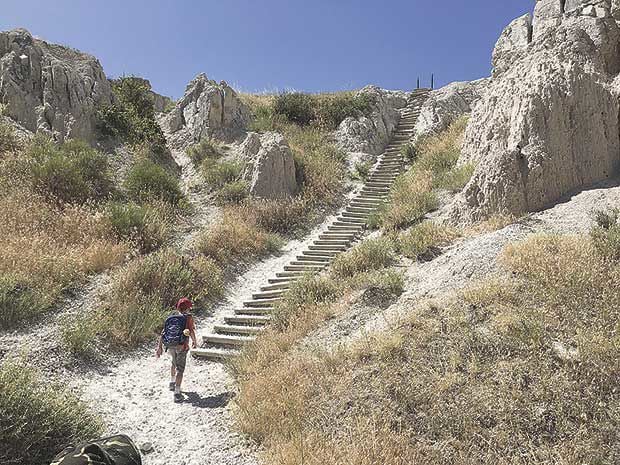 Holden Then attempts to climb the giant log ladder on the Notch Trail in Badlands.

Holden Then attempts to climb the giant log ladder on the Notch Trail in Badlands.

If you want to go on a short road trip that isn’t that far away but is still amazing, then you should go to South Dakota. It’s only 9 hours away from North Oaks and has lots of cool places to see! Here are a few of the places you could stop at in South Dakota:

Missouri National Recreational River is a stop on the border of Nebraska and South Dakota. At this park, you can hike around the Missouri River. You can see the bluffs and rocks above the river. Also, believe it or not, Meriwether Lewis and William Clark traveled up this river at this exact point! The Lewis and Clark National Historic Trail also runs through much of South Dakota.

Did you ever dream of being in a giant palace of corn? If so, your dreams could come true! In Mitchell, South Dakota there is the World’s Only Corn Palace, which is just an event center with cool corn murals on the outside. The designs made of corn are changed every year based on a new theme. If you go inside, you can learn about corn and buy corn-themed souvenirs

Another cool place to visit in South Dakota is Badlands National Park. There are many cool rock formations and animals there. You can see animals like Bighorn Sheep, bison, prairie dogs, Pronghorn Antelope, bobcats and black-footed ferrets. You can hike the on trails and see the rock formations and amazing valleys. One trail you can hike, the Notch Trail, leads you through a canyon and up a giant log ladder for an amazing view of the Badlands.

On the way out of Badlands, you can stop at Minuteman Missile National Historic Site or Wall Drug. Wall Drug has a lot of stores, restaurants and places to take pictures. If history is more of your thing, try Minuteman Missile National Historic Site instead. Here you can see a missile site that was on high alert during the Cold War. You can see nuclear missiles up close and learn the story of American history during the Cold War.

Rapid City is a great place to stay in if you plan on spending a few days in South Dakota. Some free things to do in Rapid City are the Dinosaur Park and Storybook Island. At the Dinosaur Park, you can see lots of dinosaur statues on a hill overlooking the city. Storybook Island has tons of play areas based on famous storybooks. When I went there, my younger brother who was two at the time loved running around to all the different story-themed areas!

Outside of Rapid City is the famous Mount Rushmore National Memorial. You can see the carvings of George Washington, Thomas Jefferson, Theodore Roosevelt and Abraham Lincoln. The size of the mountain and carvings will blow you away! It is definitely a must-see attraction for all people.

Custer State Park is a fun stop in South Dakota. You can drive through and see parts of the Black Hills. You can hike and find forests, hills, caves, and rock formations. Some animals that you can see are prairie dogs, bison, or maybe even donkeys.

The city of Custer is an amazing city. You can go to the Big Thunder Gold Mine to take a tour of an underground gold mine and pan for real gold! You can also go mini golfing or go to the Purple Pie Place and get some pie and ice cream.

Have you ever wanted to hike up an easy mountain that is also the tallest mountain in a state? Well, Black Elk Peak may be the hike for you! The shortest route is 5.8 miles and is very scenic. You can see the Cathedral Spires as well as a great view of the Black Hills. At the top there is a stone lookout tower that you can climb to the top of to get a full view.

South Dakota may have wide plains, but did you know that it had very long caves? South Dakota is home to the third and fourth longest caves in the world! Wind Cave is 149 miles long and Jewel Cave is 208 miles long! In both caves you can find bats and other animals. Above the caves are prairies where you can see bison, Pronghorn Antelope, prairie dogs and other animals. Some say that Jewel Cave is one on the last frontiers on Earth.

Out of all the states in America, South Dakota is the place of adventure. With all the sites and prairies, it is a great place to go on vacation. The hardest part is deciding where you should stop this time around.