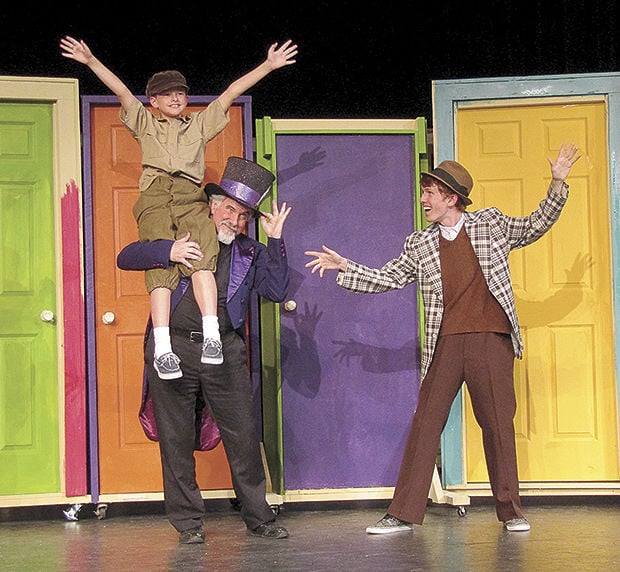 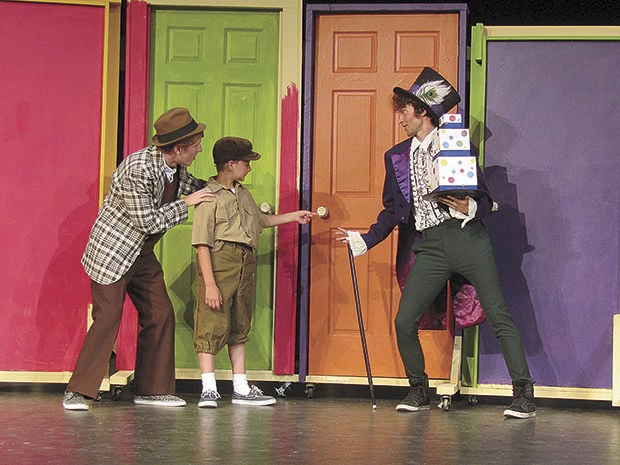 Charlie’s curiosity gets the better of him as he wonders what’s behind one of the doors in the chocolate factory.

Charlie’s curiosity gets the better of him as he wonders what’s behind one of the doors in the chocolate factory.

“We worked with local businesses, went out with a letter stating that we would offer them an ad in our program,” said Masquers Board Member Ian Lexvold. “We got at least 19 businesses, which is a good number of businesses for our first year doing it.”

The show is a fantastical rendition of the classic Roald Dahl story about a poor boy, Charlie Bucket, who wins a chance to visit a mysterious candy factory and meets a memorable cast of characters along the way. The plot is most similar to the 1971 musical film of the same name, but with a few differences. Lexvold said that the director, Michelle Schwantes, has opted to follow some of the details of the book by the same name more closely.

“Willy Wonka in the beginning is a mysterious character, he’s not really on stage right away,” Lexvold said. “The Oompa Loompas are from Loompaland like in the Johnny Depp version. They are more in native dress like fur, instead of that traditional worker factory outfit.”

The production is also hoping to incorporate a few ambitious technical elements to add to the mystique and wonder of the chocolate factory.

“It’s a magical experience,” Lexvold said. “I think the director we have this year, she has a lot of technical aspects she is excited about. We’re trying to accommodate projections, different effects with bubbles, black lighting, all that jazz.”

It’s a musical show, and includes favorite numbers from the movie such as the “Oompa Loompa Song,” “I Got A Golden Ticket” and “Pure Imagination.”

The show includes a cast of more than 35 actors of various ages, many of them students and youth in the Forest Lake community. Lexvold said that one of the challenges in putting the show together was enticing more adults to audition. Right now, there are only seven or eight adults who are participating in the show, which means that the production has to use a bit of fancy makeup work to age up some of the characters.

“A lot of teenagers are playing the grandparents, which is working very well,” Lexvold said. “They’re very good actors.”

The absence of adults in community theater is something that the Masquers Theatre Company hopes to address in future productions.

“One of the huge things we had is the lack of adults auditioning for our shows these days,” he said. “We don’t know where they are, what kind of shows they want us to do. That’s something that our board is still trying to figure out.”

“Willy Wonka and the Chocolate Factory” opened July 7 and will run every Thursday, Friday, Saturday and Sunday through July 24. To learn more about the show or purchase tickets, visit www.masquerstheatre.org.

What: Willy Wonka and the Chocolate Factory