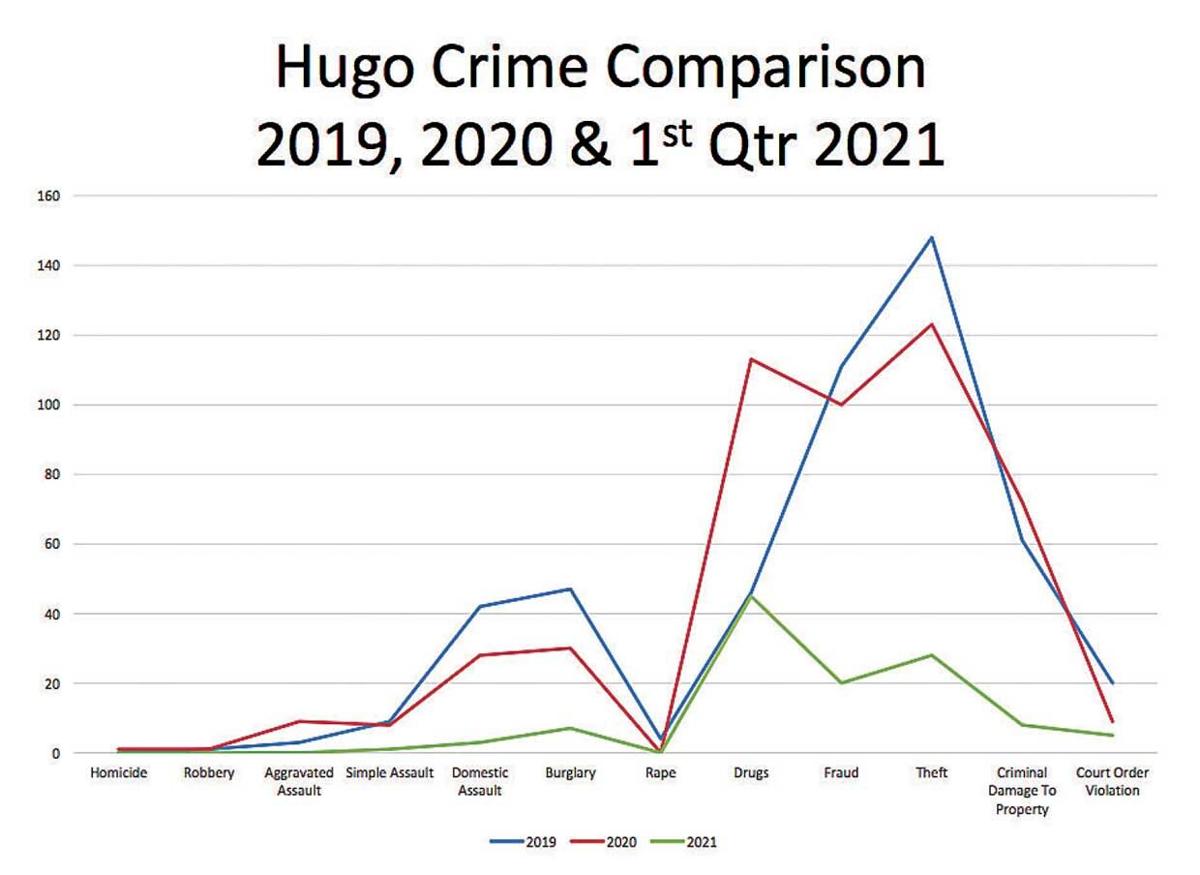 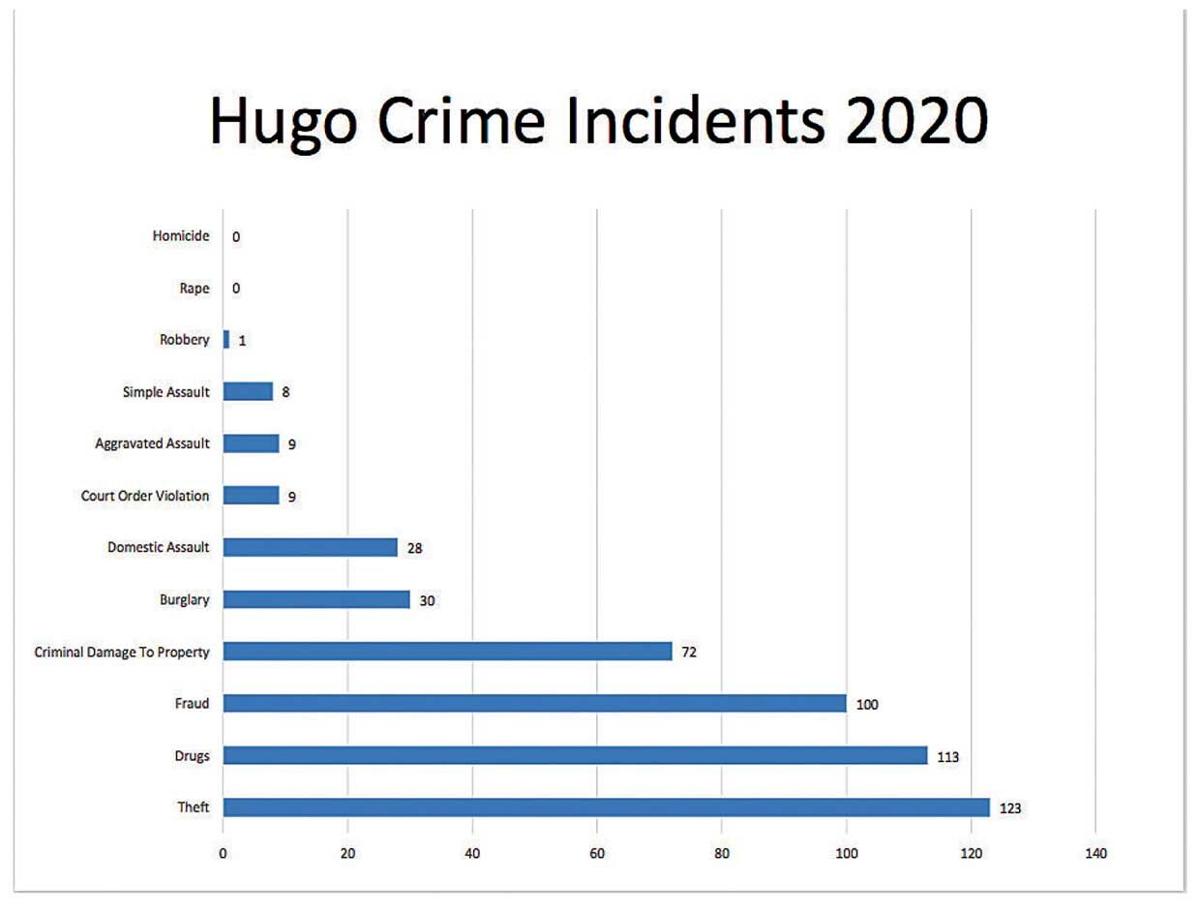 This chart breaks down what type of crimes occurred within the city of Hugo throughout 2020.

This chart breaks down what type of crimes occurred within the city of Hugo throughout 2020.

The Washington County Sheriff’s Office (WCSO) remained busy in Hugo in 2020, a trend that will likely continue in 2021.

The city of Hugo is served by six deputies, one detective and one sergeant. The city of Hugo paid $1.2 million for WCSO to provide services in 2020, which equates to around $80 per capita. Hugo is second to lowest on the list of costs per capita for Washington County cities, just above Mahtomedi, at $67 per capita, and right below Lake Elmo, at $100 per capita. Oak Park Heights pays the most, at $312 per capita.

Starry said 2020 brought on many new challenges for WCSO, mainly related to the pandemic and civil unrest. Due to COVID-19, the WCSO had to shift to an emergency schedule made up of 12-hour shifts and a team concept to limit deputy-to-deputy contact. Deputies also stayed busy responding to civil unrest, both within the city of Hugo and in neighboring communities such as Oakdale, Stillwater, Woodbury and St. Paul.

“Hiring has (also) been a challenge, as we maintain our high standards for hiring,” Starry said. “We are competing for a smaller pool of candidates and staying competitive is a priority for the sheriff’s office.” Starry added that WCSO began to offer more lateral opportunities within the department in hopes to increase the candidate pool.

Overdoses remained flat from 2019, with a total of 39 countywide. There were six overdoses in the city of Hugo for 2020 compared to five in 2019.

The WCSO responded to 8,421 calls for service and 5,433 incidents in the city of Hugo in 2020. (A call for service means any call that comes into dispatch, City Hall or is initiated by a deputy; incidents require more time, such as a ticket, arrest or a formality of a report.) Starry said the highest call load for the city of Hugo was in between 3 and 9 p.m.

In 2020, the city of Hugo had one robbery, eight simple assaults, 28 domestic assaults, 30 burglaries, 72 incidents of criminal damage to property, 100 fraud incidents, 133 drug incidents and 123 thefts. “Fraud scams continue to be out there, and are occurring daily,” Starry explained. “We are starting to see them target all ages. It used to be that they would target vulnerable adults, but we are seeing people of all ages be scammed.”

Hugo’s full-time detective remains busy too. In 2020, the detective investigated and cleared 100 cases.

Council Member Mike Miron wanted to know if WCSO is seeing any trends now that some COVID-19 restrictions are being dialed back. Starry said, “We are starting to see people getting out and enjoying daily life again,” he said. “We are also seeing people at restaurants more and out later than they used to be.”

In response to these trends, Starry said the WCSO created a Coordinated Response Unit and Special Enforcement Team. The WCSO also applied for and received several grants for both speeding and DWI enforcement. All WCSO deputies now carry Naloxone, a medication that is designed to rapidly reverse an opioid overdose.

Starry said the one thing WCSO is looking forward to for 2021 is being able to attend community engagement events. Before the pandemic, the WCSO was averaging about 150 events a year.

Starry ended his presentation with a request: “Please slow down, watch out for pedestrians, kids chasing a ball into the street … If you do see anyone suspicious, please call. We are out there 24/7. We would rather take that report (even) if it is nothing more than getting there in the a.m. to find a car broken into.”

Starry said residents should feel free to call 911, even when it is not an emergency, as all the calls come into the same dispatch center and the dispatcher will ask if it is an emergency. Residents can also call the nonemergency number at 651-439-9381.