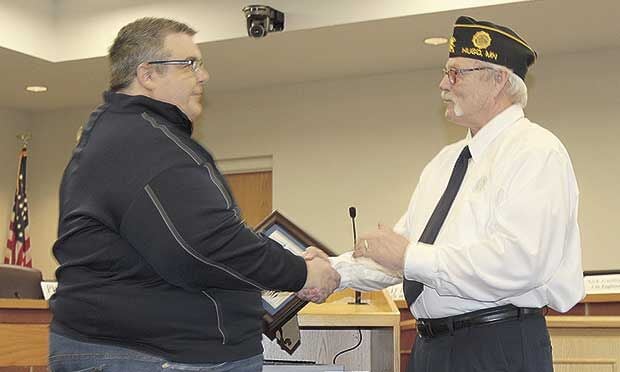 HUGO — The man who is credited with turning American Legion Post 620 around from near foreclosure to being one of the top charitable gambling sites in the state has handed over the reins.

Hugo resident Greg Burmeister has served in the role of commander for seven years. He  has been a member of an American Legion for 50 years.

“(Greg) has been a community servant in a lot of different ways, and worn a lot of different hats,” said City Administrator Bryan Bear. “There was a chance the Legion wasn’t going to be here at one point in time. Greg came at a critical period of time and made some big decisions, and now not only did the Legion not close their doors, but they are in a position to be able to contribute back to community in a significant way.”

The mayor and City Council recognized Burmeister at a meeting earlier this month and presented him with a certificate. Legion members, community members and firefighters all showed up to thank him for all he has done for the Legion and community.

Burmeister is a four-year Navy veteran who spent two years in Vietnam. His connection to the Legion began prior to his service, when his father would bring him along to the local Legion to help out with various benefits.

“I guess he got me started, and once I got discharged out of the service I joined the Legion immediately,” he recalled. Burmeister was a member of the Legion in Bloomington until he moved to Hugo in 1987 and switched his membership to Post 620.

Burmeister joined the department that very next week and served for 16 years. He also served on the city’s Board of Zoning Adjustments and its Planning Commission. He eventually had to move out of town for awhile to take care of his mother, but once he was able to return, he was looking for ways to serve.

“I needed to volunteer somewhere again, and that’s when I stepped up at the Legion,” he explained. “When I took over, the bank was ready to foreclose on us. I opened the mailbox, and I had three months’ worth of bills sitting in there that hadn’t been paid. It was an eye-opener.”

Burmeister explained that he had a lot of help from a local businessman and Premier Bank, and he surrounded himself with people who had Legion and bar experience.

“I went in, I cleaned house, I fired everybody … It turned into my full-time, non-paying job,” he said. “We have now turned it around into one of the premiere bars in town,” he said. “I used to go in there and everybody was swearing at me. Now I walk in, and I’ve got smiles and everybody’s happy. I’ve got a great crowd of people that come there. It is heartwarming.”

Years ago, the Legion was lucky if it raised $100,000 a year from charitable gambling. Now, that number is closer to $3.2 million. Burmeister said he was told that out of the more than 700 charitable gambling organizations in the state of Minnesota, the Hugo Legion ranks number five in terms of funds raised.

The Legion has a group of organizations it gives back to monthly, including the Hugo Fire Department, but also takes on other donation requests.

“He has been involved in community service basically his whole life. He has a soft spot in his heart for our community,” said Fire Chief Jim Compton Jr. “Under his leadership, the Legion has donated tens of thousands of dollars to the Hugo Fire Department. Their charitable gambling is second to none. They are a great organization under his leadership, and we can’t thank him enough.”

“Greg has made it into a fantastic organization,” said Beyond the Yellow Ribbon Network Co-Chair Chuck Haas. “A lot of communities throughout the state just have a so-so Legion, but because of him and the other folks there, we have a vibrant Legion in our community, and it’s a great asset.”

Legion General Manager Stacey Carlson said. “I can’t thank him enough for everything he has done not only for me, but for our Legion, too. A lot of people don’t see what he does behind the scenes. He is crawling on the ground fixing things and doing all kinds of things that nobody even knows.”

In terms of what he will miss most, Burmeister said he will miss the daily interactions with everyone. Dave Fleming has now taken over as commander. For the next year, Burmeister doesn’t plan to go far, and will be “on call” for whatever Fleming needs.

Once next May or June rolls around, he and his wife plan to sell their home in Hugo and move to their lake home in Walker, Minnesota, on Leech Lake.

“I can’t tell you what it means to have people like you in our community,” Mayor Tom Weidt said. “It is so important to the fabric of what makes a good town.

“It is very important what people like you do, and I appreciate it from the bottom of my heart. You have made Hugo what it is today. It is people like you that make a difference.”

Managing Editor Shannon Granholm can be reached at 651-407-1227 or citizennews@presspubs.com.